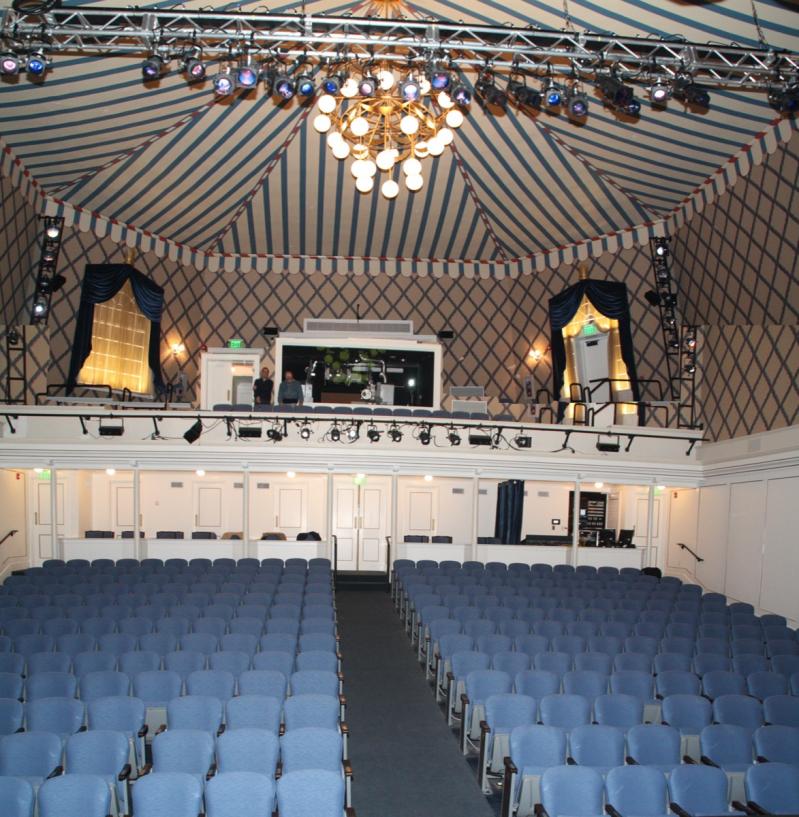 Guild Hall's theater after it was restored in renovations that were completed in 2009.
Durell Godfrey
By Jennifer Landes

Last week, Preservation Long Island sent letters to Guild Hall's board of trustees and director as well as East Hampton Village's governing bodies asking them to consider the historical significance of Guild Hall's interiors in their plans to renovate the building this year.

Sarah Kautz, the preservation director of the organization, confirmed that she had sent recommendations to the leadership of Guild Hall as well as the village board, its design review board, and the zoning board of appeals, which are reviewing the proposed changes to the building's exterior.

Guild Hall unveiled plans in February to remodel the galleries, offices, education department, and -- most dramatically -- its theater to update its technology and improve its acoustical design. The current plans would obscure the original circus-themed interior, dating from 1931 and updated in work that was completed in 2009.

"Guild Hall has been listed on the State and National Registers of Historic Places since 1988 as a contributing resource of the East Hampton Village Historic District," Ms. Kautz noted in an email. "It is also a designated historic property of the Village of East Hampton. The interior space at John Drew Theater is among Guild Hall's most important character defining features."

That last phrase was not chosen at random. It is a direct reference to a term employed by the National Parks Service's Technical Preservation Services division, which "develops historic preservation policy and guidance on preserving and rehabilitating historic buildings, administers the Federal Historic Preservation Tax Incentives Program for rehabilitating historic buildings, and sets the Secretary of the Interior's Standards for the Treatment of Historic Properties," according to its website.

In an article published by the department in 1988, it states, "While the exterior of a building may be its most prominent visible aspect, or its 'public face,' its interior can be even more important in conveying the building's history and development over time."

The article continues, "Caution should be exercised in developing plans that would radically change character-defining spaces or that would obscure, damage, or destroy interior features or finishes."

The department points specifically to "a theater auditorium or sequences of rooms such as double parlors or a lobby leading to a stairway that ascends to a mezzanine" as possibly "a building's most important spaces."

The writers cite features such as plaster cornices, millwork, paints, wall coverings, and finishing techniques as contributors to a building's unique character. In the case of Guild Hall, those would be "the painted plaster trompe l'oeil 'circus tent' ceiling, lighting fixtures, decorative woodwork, and the historic configuration of seating areas, as well as pilasters, cornices, frieze mouldings, and existing doorway surrounds in the lobby and galleries," according to Ms. Kautz.

She said Preservation Long Island has recommended that any changes to Guild Hall's interior follow the Secretary of the Interior's Standards for the Treatment of Historic Properties with Guidelines for Preserving, Rehabilitating, Restoring, and Reconstructing Historic Buildings. These are specific instructions for how those buildings should be handled. These are "widely recognized as best practice by architects and preservation professionals across the country."

As currently proposed, Ms. Kautz said, "the theater alterations do not adhere to the Secretary of the Interior's Standards and Guidelines, indicating the changes will diminish rather than enhance Guild Hall's historic character and integrity."

Additionally, Guild Hall could be "eligible for grants, tax credits, or other financial incentives that would support a more sensitive rehabilitation of John Drew Theater as an active performance space."

Speaking by phone recently, Randy Correll, who was the architect at Robert A.M. Stern Architects in charge of the renovations the last time the building was updated, pointed to performance spaces in Hudson, N.Y. (Hudson Hall), and Great Barrington, Mass. (Mahaiwe Performing Arts Center), that had recent successful and historically sensitive renovations. He and Mr. Stern had endeavored to preserve John Drew Theater's historical detail while finding ways to hide contemporary equipment and acoustic solutions behind walls or fabric.

Ms. Kautz said she hopes the leadership of Guild Hall will review the recommendations she sent "and perhaps change their minds."

Andrea Grover, Guild Hall's executive director, said recently that the renderings published in February are not the final version of the project.