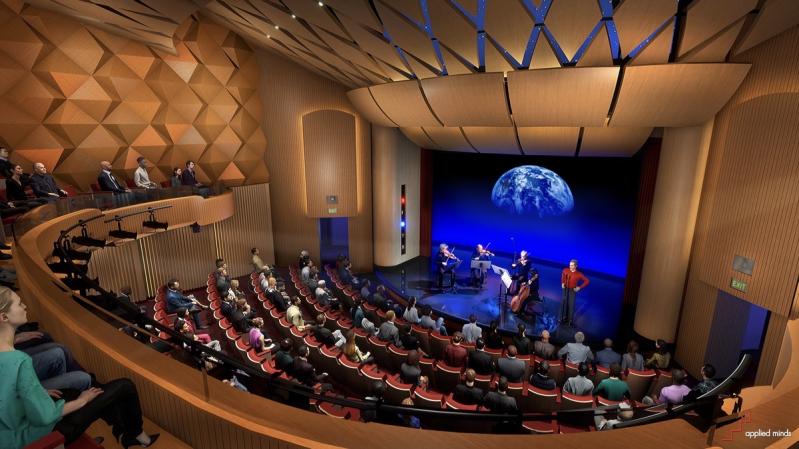 The proposed updates of Guild Hall's theater include reflective surfaces to improve the acoustics. Inserted into the rendering onstage is "A Thousand Thoughts" with the Kronos Quartet and Sam Green, a supporter of the project.
© Guild Hall and Applied Minds, LLC, 2022
By Jennifer Landes

Guild Hall's February announcement of the renovations of its property and building have been greeted with both enthusiasm and a degree of shock and horror on social media, in letters to the editor, and in interviews with The Star.

Many have praised the plans, which include reconfiguring the galleries so that larger works can be displayed, bringing the theater up to 21st-century production standards and beyond, and making the entrance and exterior spaces more welcoming.

Critics have mainly focused on the theater. Some, including Helen Harrison, who was curator at the museum for eight years and has continued to be involved with the organization in the three decades since becoming director of the Pollock-Krasner House and Study Center in Springs, also dislike the plans to remove the fireplaces in the galleries, now behind the walls, and the decorative elements in those rooms.

The breakdown appears to be between those who are looking at the changes as improvements supporting a more up-to-date experience of performances and works of art and those who see the galleries and theater as architectural treasures worthy of preservation -- experiences in their own right.

In hoping for some public forum to weigh in on the plans, critics have few options. The East Hampton Village Zoning Board of Appeals will hold a hearing Friday at its regular monthly meeting at 11 a.m., but it is reviewing only the exterior changes. In a letter she sent to the board, Ms. Harrison questioned whether there is precedent for a review of the interior renovations.

Seeking to preempt those challenging the interior renovations last week, Guild Hall's attorney, Leonard Ackerman, has written his own letter to the board. In it, he said, "the forthcoming Z.B.A. hearing is not a forum for the Z.B.A. to consider or address the choices Guild Hall has made and will make concerning the renovations to the theater."

Further, he wanted "to make clear that under the village's code, the Z.B.A. does not have jurisdiction over the nature of the interior renovations to the theater." Mr. Ackerman went on in the letter to challenge the need for a special permit as was required by the Building Department to continue the use of the building for a museum and theater in a residential area.

Among those supporting the changes are artists and performers who have praised the renovations for addressing the facility's current limitations. Almond Zigmund, Lisa Perry, Bruce Wolosoff, Eric Fischl, Lori Hawkins, Sam Green, and Kerry Sharkey Miller are some of the people who have publicly come out in favor of the renovations.

Ms. Perry said in an interview with The Star that, to her, the theater "feels like it's like back in another era . . . in a place that is so rich with programming and so much incredible things going on." She has experience presenting there, having given a talk in the theater for her design brand, and has been in the audience on many occasions and said the experience could be much improved by the proposed changes.

In a letter to The Star, Mr. Fischl described the theater as "a very bold design aimed at creating a better use of the audience space, [making it] more gracious and comfortable, and, more important, upgrading the performance and theatrical space to address the current theater's egregious shortcomings."

David Netto, a designer and student of architecture who has worked with the East Hampton Historical Society on a book celebrating classic Hamptons houses, was one of the first to criticize plans for the theater on The Star's Instagram feed and then on his own. Calling the current theater one of "the great public spaces of Long Island's East End," he said, "It's up for the cruise ship planetarium treatment."

In a follow-up conversation with The Star, Mr. Netto said he had spent time in the theater since his youth and believes preservation of the room should be the priority. "It's the sort of secret living room of the town, in a way, because of the architecture, not in spite of the architecture." Mr. Netto also wrote a letter to The Star.

In a second letter to The Star, Ms. Harrison described a misconception about the galleries' redesign. "Demolishing the fireplaces, as shown on the published rendering, is hardly a return to original shapes and proportions. Getting rid of the dropped ceilings and the box office indentation in the Moran Gallery would do that, but ripping out all the architectural detailing wouldn't."

She also said in an interview that removing the chimneys would affect the exterior of the building and should be part of a review. "I'm not recommending uncovering the fireplaces or a return to knotty pine walls with chair rails, interior shutters on the front windows, and checkerboard asphalt tile floors -- original features long since removed -- but why completely neuter what remains?"

Other people who have expressed concern on social media or directly to The Star are Barbara Borsack, Irwin Levy, Michael Shone (the global visuals director for Architectural Digest), a board member who wished to remain anonymous, and several other people with ties to the community and the building.

Ms. Perry suggested honoring the past by crafting a replica of the theater that people could examine in the lobby when they come for a performance. Mr. Netto suggested a new upgraded theater be constructed elsewhere. Given such diametrically opposed suggested solutions, it does not appear that the two sides will come to agreement any time soon or that Guild Hall will alter its course once its plans are approved.

A Conference for Young People to Create Solutions
Get Outside, Get Moving
Two Traditions, One Fair in Springs
END_OF_DOCUMENT_TOKEN_TO_BE_REPLACED