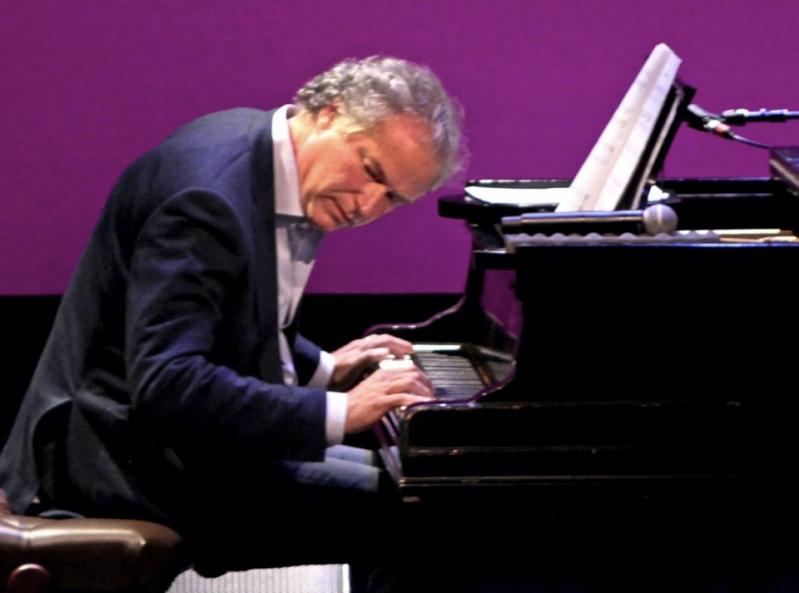 The composer and pianist Bruce Wolosoff will perform music by Schubert and Debussy, as well as his own compositions, at the Shelter Island Presbyterian Church.
Tom Kochie
By Mark Segal

Atlas Back in Sag
Fireside Sessions with Nancy Atlas will rock Sag Harbor's Bay Street Theater Friday and Saturday at 8 p.m. Ms. Atlas and her band, the Nancy Atlas Project, have opened for or performed with Elvis Costello, Lucinda Williams, Toots and the Maytals, Jimmy Buffet, Crosby, Stills, and Nash, and many others.

Abolitionist Allies
"The Agitators," Mat Smart's play about the 45-year friendship between Susan B. Anthony and Frederick Douglass, will have its Long Island premiere Friday night at the Vail-Leavitt Music Hall in Riverhead.

Produced by Boots on the Ground Theater, the play explores the abolitionists' sometimes tempestuous relationship, from their first meeting in the 1840s through the Civil War to the early days of the fight for women's suffrage.

Douglass is played by Justin Harris, an actor from Riverhead, and Anthony by Bonnie Grice, the founder and director of the theater company, who has long been familiar to East Enders as a radio host and actress.

Chords and Truth
Tennessee Walt, a.k.a. Gayden Wren, will return to the East Hampton Library with "Three Chords and the Truth: Country's Greatest Songwriters" on Saturday at 2 p.m.

An all-new show, "Three Chords and the Truth" will focus not on country singer-songwriters, but on lesser-known songwriters such as Elsie McWilliams, Hank Cochran, Harlan Howard, Fred Rose, and Cindy Walker, whose hits were performed by others.

Among the notable titles on the program are ""Hobo Bill's Last Ride," "Blue Eyes Crying in the Rain," "Heartaches by the Number," and "A Boy Named Sue."

"The show is a chance for the people behind the songs to get their day in the sun," said Mr. Wren.

Wolosoff on the Rock
Bruce Wolosoff, an internationally renowned pianist and composer from Shelter Island, will perform on the island for the first time, Saturday evening at 7 in the Shelter Island Friends of Music's first concert of the 2022 season.

The free concert, which will take place at the Shelter Island Presbyterian Church, will open with Schubert's Impromptu in G-flat Major Opus 90 No. 3, and several pieces by Debussy. The second half will be devoted to Mr. Wolosoff's original compositions.

Rising Stars, Live
Alexey Pudinov, a Russian-born pianist based in Germany since 2006, is next up in the Rising Stars Piano Series at the Southampton Cultural Center, on Saturday at 6 p.m.

Mr. Pudinov's prizes include the Gershwin Best Performance Prize in 2015, the 2014 Steinway Prize, the First LMN Menuhin Prize in 2016, and first prize in the North West International Ensemble Competition in Vancouver.

He will perform works by Brahms, Bach/Silotti, Gershwin, Rachmaninoff, and Tjiok. Tickets are $20 in advance from the center's website, $25 at the door, free for students under 21.

Chickasaw Storyteller
"Te Ata," a documentary by Nathan Frankowski about Mary Thompson Fisher, who overcame cultural barriers to become one of the most notable Native American performers of all time, will be shown at the Southampton Arts Center Friday at 6 p.m.

Born in Indian territory in Oklahoma and raised on the songs and stories of her Chickasaw culture, she took the stage name of "Te Ata," which means "bearer of the morning." An accomplished actor and storyteller, at the height of her 60-year career she performed for President Franklin Roosevelt at the White House, for European royalty, and on stages around the world.

Beethoven, Chopin, Etc.
Jeremy Ajani Jordan, a pianist who made his musical debut on live television at the age of 9, will perform a program of compositions by Beethoven, Scriabin, Chopin, and Wagner at the Rogers Memorial Library in Southampton on Sunday at 4 p.m.

A Conference for Young People to Create Solutions
Get Outside, Get Moving
Two Traditions, One Fair in Springs
END_OF_DOCUMENT_TOKEN_TO_BE_REPLACED