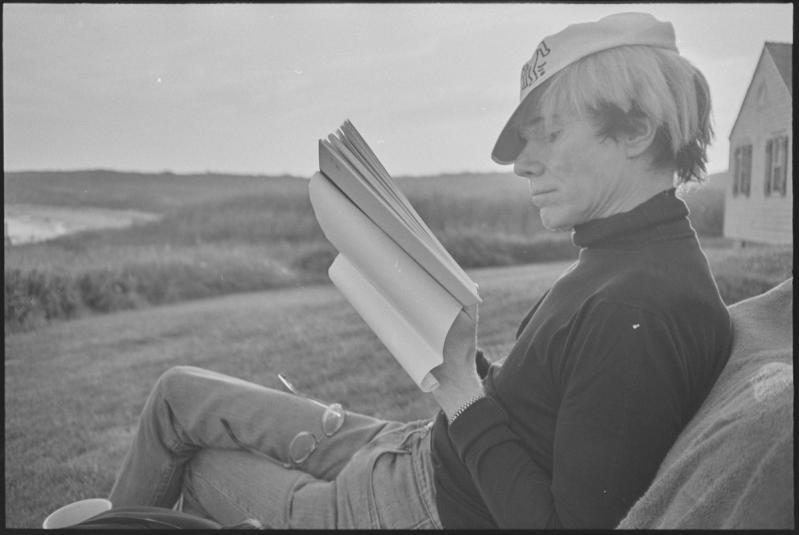 The many faces of Andy Warhol, his friends, collaborators, confidants, and lovers are on display over six episodes of "The Andy Warhol Diaries" on Netflix.
Andy Warhol Foundation/Courtesy of Netflix © 2022
By Jennifer Landes

It's hard to know what to make of the significant attention Andy Warhol has received in the past few years. Major projects such as a retrospective exhibition mounted by the Whitney Museum of American Art, which opened in late 2018 and traveled through early 2020, and a prodigious and scholarly biography by Blake Gopnik that arrived in April of 2020 -- just in time for pandemic reading lists -- have resulted in tectonic reassessments of the artist's life and career. Perhaps it was just time.

Now, a document that has been in the public consciousness since 1989, "The Andy Warhol Diaries," has been expanded, animated, and given new purpose by Ryan Murphy and Andrew Rossi for Netflix. The six-part biopic series, which began streaming this month, relies on the vast archive of Warhol (who for many years had a house in Montauk) in still and film photography to serve as a foundation for an illustrated interpretation of Pat Hackett's transcriptions of their daily conversations from late 1976 to just a few days before his death in February 1987.

The conversations were recaps of his adventures of the preceding day, an oral history of his many lives: professional, artistic, and deeply personal. They gain more immediacy by using artificial intelligence to alter Bill Irwin's voice as he reads passages. The tech trick seamlessly produces a virtual Warhol, imbuing the whole affair with immediacy and intimacy, breaking down walls of unknowability he so carefully crafted during his lifetime.

And this series provides a longer timeline than the mere decade the diaries cover, starting back in his childhood in Pittsburgh, rather than in 1968, when Ms. Hackett was initially hired -- in those days, to transcribe his phone calls, which he habitually taped during his recovery at home after he was shot and almost killed at the Factory. Several years later, the two developed a routine of speaking each morning to keep track of Warhol's business expenses. In fact, when the diaries were first published, this was often played for humor: the recitation of cab fares, bar bills, plane tickets, and other assorted fees and costs associated with the business of being Andy Warhol.

"Andy could have tape recorded himself," Ms. Hackett says in the series, "but he wanted an audience." And soon the diary entries revealed more than mere expenses, with insertions of scandalous anecdotes and very personal feelings into the mix. "The diaries are Andy's thoughts in Andy's words. No other part of his work shows this."

Because of this, the series zeroes in on those emotions and the relationships that brought them out in a period in history when gay culture was still very closeted. This makes things tricky at times. At least one of Warhol's partners did not want to be outed and requested/demanded that he not be mentioned in the diaries. Warhol could be considered the epitome of "the unreliable narrator," someone whose cultivated persona was enigmatic, both celebrity and cipher. The producers address this by bringing in those whose stories are being told through the diaries to correct or muddle his record.

After introductions and a bit of context in episode one, we hear Warhol's first diary entry. The date in text on a title frame reads "Wednesday, November 24, 1976." The film cuts to a typewriter pounding out the date. Warhol's A.I. voice recounts getting up in Vancouver and cabbing to the airport. Stock footage of the city, traffic, the inside of a cab of the time, two of his artworks featuring money as he lists the expenses (cab fare, tip, magazines for the plane), and a plane taking off serve as rapid-fire illustrations for his report.

As he describes an art opening at the Seattle Art Museum and the persistence of an associate who keeps asking him to define Pop Art, we see still photographs of the opening and video recordings of him being interviewed early in his career in 1960s hipster mode (asked if Pop has become repetitive, he says "yes"), and then later on, dressed in a plaid shirt, tie, and down vest, when he jokes of Pop, "I always think it's being a dad. . . . Everyone calls me Pops around here." This is the Warhol we have known for years, glib, ironic, inscrutable.

So it goes under Mr. Rossi's writing and direction, the diaries creatively and dynamically illustrated with stock images, Warhol's artwork, personal photographs and films along with those of others who interviewed or followed him around during his lifetime. Actors mime his activities -- looking out of windows, walking through his townhouse, dialing the phone. These are interspersed with interviews with those in the diaries or for those no longer here to speak for themselves (sadly a good number of people), their relatives, friends, or other confidants. Curators, historians, and critics help define what it all means and why it matters.

What this series demonstrates is that after the recent exhaustive studies, there is still more to consider and reconsider. Whereas the retrospective proved that Warhol's artistic output was more of a continuum of notable work, rather than one fertile period followed by a longer fallow one, and Mr. Gopnik's biography showed his depth of vision and eerie prescience, often in the context of his collaborations, the series demonstrates more directly how his personal life intertwines with his work, with a focus on his relationships from the period after he was shot until his death.

In those early entries, he's upbeat describing Thanksgiving spent with Jed Johnson at Chadds Ford, Pa., as the guest of Jamie Wyeth, and then rising early to get to Bloomingdale's before the crowds on Black Friday (at which point a vintage television ad from that era pops up briefly). It sounds jolly and superficial, with an exception of a complaint that the rich food would likely upset his gallbladder, which bothered him for years before he finally became so sick he required emergency surgery and died a few days later.

The foreshadowing flows into the next passage, a brooding entry from April 1981. He says he is in "a strange period. I've got these desperate feelings that nothing means anything." This contrast early in the series, between the bon vivant exterior and the more contemplative, emotional, and sometimes despairing core, follows in all six episodes, providing layers of depth to a story we thought we knew.

"No one wants to talk about Warhol having relationships that are important to his body of work," Jessica Beck, the curator of Pittsburgh's Andy Warhol Museum, notes in an interview. "But I think Warhol's biography is important for some of the reading of the work, because this idea of intimacy or queerness is always there."

The first few episodes are divided into examinations of some of these important relationships, with people such as Johnson, who died in the flight 800 crash over Long Island in 1996, Jon Gould, who died in 1986, and Jean-Michel Basquiat, who died in 1988. They are followed by a look at his late-career mainstream fame and a final episode dealing with his reaction to the AIDS crisis so dominant in the late-1980s culture and beyond.

Yes, the words were always on the page. Yet decades later and always in the context of his art, which is everywhere in this series, we hear not only his but other voices (Kenny Scharf, Rob Lowe, Julian Schnabel, Lucy Sante, Mariel Hemingway, Fab Five Freddy, Bob Colacello, Debbie Harry, and Donna De Salvo, who organized the Whitney show and knew the artist for years, to name just a few) telling us at the same time why his real life, so carefully guarded and rarely revealed during his lifetime, is important to the understanding of his work and why it is still so bracingly relevant today.

Also of note, an exhibition at the Brooklyn Museum, "Andy Warhol: Revelation" examines how the artist's Catholic faith -- he went to church regularly throughout his life -- functions in his work. It is on view through June 19.

A Conference for Young People to Create Solutions
Get Outside, Get Moving
Two Traditions, One Fair in Springs
END_OF_DOCUMENT_TOKEN_TO_BE_REPLACED