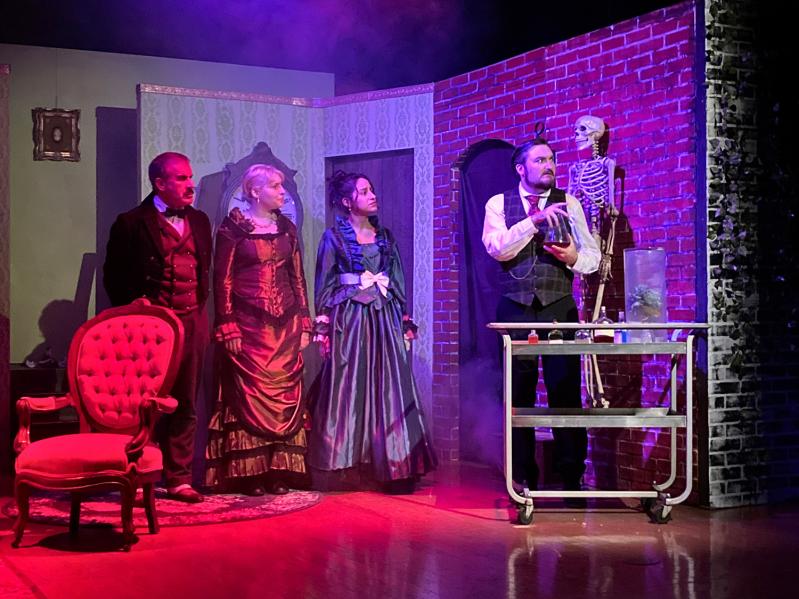 The cast in a scene from the "campy, silly, and unexpectedly hilarious" production of "Chemical Imbalance: A Jekyll and Hyde Play."
Tom Kochie
By Kurt Wenzel

With Halloween looming, the Southampton Cultural Center stages Lauren Wilson's "Chemical Imbalance: A Jekyll and Hyde Play." It is by turns silly, campy, and unexpectedly hilarious.

Ms. Wilson's comedy sticks fairly close to the original concept of Robert Louis Stevenson's classic novel. The setting is Victorian England. Dr. Henry Jekyll, a well-to-do London doctor, is conducting experiments on himself in his laboratory (here enunciated with that Saturday matinee inflection "la-bore-a-tree"). Things go wrong, of course, and Dr. Jekyll slips into an alternate consciousness that leads him to violent acts -- Stevenson's 19th-century metaphor about the limits of science and the dual nature of man.

Who thought this was the stuff of farce? Keenly, Ms. Wilson has. But this is the kind of play that in its text is only mildly amusing, counting on the players to raise Cain with the familiar story. This production, under the direction of Mark Heidemann and the "boots on the ground theater," is up to the task and then some, taking the actors to the outer limits of camp.

As we meet Dr. Jekyll, he has just thrashed a small dog to death, arriving at home with dog hairs on his jacket -- the evidence completely overlooked by his hopelessly foppish and out-of-touch upper-middle-class family (thoroughly invented by the playwright). His mother, Euphoria, and sister, Ambrosia (this is the kind of play where nearly everyone has a ludicrous name), are intent on fixing a marriage between Henry and Miss Rosamunda Dewthistle. The fetching Dewthistle has just returned from Spain where she has secretly become impregnated by a Spanish hunter, and marriage to a doctor seems like a good plan. Dr. Jekyll couldn't be less interested, as he is "married to science" -- i.e., addicted to his mind-altering experiments.

If this setup doesn't induce side-splitting laughter, it's the performances that lift it into a full-tilt, highly enjoyable farce. Under the guidance of Mr. Heidemann, the players turn the camp up to 11, hamming up their absurd personalities in a tone that flirts with disaster but is almost always dead-on.

Bonnie Grice as Jekyll's mother is subtly but noticeably good, playing a kind of Real Housewives of East London mother who has little to worry her but afternoon tea and placing her son with a suitable wife. Christian Lepore, done up in drag as Lady Throckmortonshire -- a friend of the family -- seems transported from an Oscar Wilde play as he utilizes his bulk and deft timing to nearly steal the play. And Bela Gogiashvili does terrific double duty as Calliope and Penelope, the good and evil twin sisters who constantly bedevil both Jekyll and Hyde.

But this play lives and dies on the portrayal of Dr. Jekyll, and Colin Palmer nails it, finding the right pitch of absurd superciliousness as the doctor and throwing himself into grotesque, though somehow funny, paroxysms as he transforms into Hyde.

The entire cast, in fact, seems to be having a grand time, knocking each other on the head with canes and rolling about the stage half-cocked. There is an especially hilarious scene during a dinner party at the Jekylls' house, cleverly staged like the Last Supper, where the entire cast ends up under the table. You can sense the fun the cast is having, and it is infectious. At times things become so outrageous you wonder how the actors manage to keep a straight face.

There is a subtext to Ms. Wilson's play concerning an "Upstairs, Downstairs" working-class outrage. Ivy, the Cockney maid, is treated with much contempt, and there is much talk of the inferiority of the working class -- including a suggestion by Lady Throckmortonshire that servants be publicly executed to get them to work harder.

But mostly Ms. Wilson's play is a blueprint for a skilled director to see how far the performers dare to indulge their camp fantasies. With "Chemical Imbalance," Mr. Heidemann goes pretty far to the edge, skillfully letting things go completely zany without losing control. It's a satisfying and at times uproarious night of comedy.