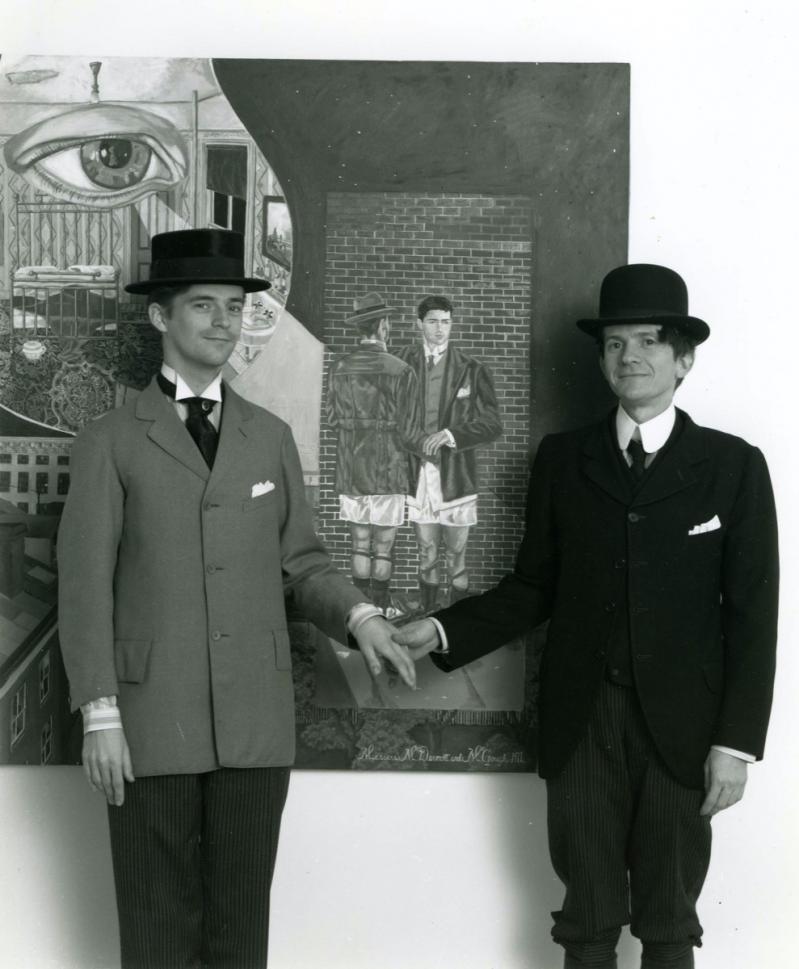 Work by David McDermott and Peter McGough, who have been collaborating since 1980, will be on view starting Friday at Keyes Art in Sag Harbor.
By Mark Segal

Leibers' Legacy
Colm Rowan Fine Art in East Hampton, in cooperation with the Leonard Tourne Gallery in New York and the Leiber Collection, will present “Gerson and Judith Leiber: A Centennial Legacy” from Saturday through Oct. 2.

The exhibition features a collection of rarely seen oil paintings by Gerson and minaudieres, small evening bags, by Judith, one of the 20th century’s most iconic handbag designers.

Both Judith and Gerson were born in 1921 and met after the end of World War II in Budapest, where he was stationed as an American soldier. After arriving in Manhattan in 1946, they pursued their dreams, he as a painter at the Art Students League, she as a designer with fashion houses. The rest is history, with his paintings and her handbags entering the permanent collections of important museums.
The Leibers died within hours of each other in April 2018. The Leiber Collection in Springs houses hundreds of her handbags and his paintings, etchings, lithographs, and drawings.

"Swimmers" at Borghi
“Swimmers 2007-2021,” an exhibition of paintings by Catherine Lepp, will open Friday at Mark Borghi Gallery in Sag Harbor and remain on view through Sept. 30.

Ms. Lepp’s “Swimmers” series came about through years of observing her children swimming at New York City’s pools and beaches. She catches the awkward confusion of heads, knees, and feet tumbling and turning in the water. Swirling, thick brushstrokes capture both light and volume; in some cases the figures almost disappear in the aquatic turmoil.

“Lepp’s paintings slowly suggest that the artist, and perhaps by extension the viewer, is both spectator and participant -- sharing the same fluid space. . . . ” wrote a reviewer for artcritical.com.

At Firestone N.Y.C.
“Ellsworth Ausby: Somewhere in Space,” an exhibition of paintings from the 1960s and ‘70s, will open at Eric Firestone Gallery, 40 Great Jones Street in New York on Friday, with a reception from 6 to 8 p.m. The show will continue through Oct. 30.

Ausby was concerned with exploring the “infinite possibilities of two-dimensional space,” says the gallery. The works in this exhibition show his development from totemic paintings with a metaphorical Africanist symbolism to more minimalist, multi-part, unstretched canvases and shaped canvas constructions arranged directly on the wall.

The artist was dedicated to reflecting a deeply rooted African aesthetic and cultural heritage. “It is a fact that the Black image ‘is’ and has always been established,” he wrote.

East End Watercolors
“Water + Color + Works,” a show of work by seven East End watercolor artists, will be on view at Ashawagh Hall in Springs from Friday through Sunday. A reception is set for Saturday from 5 to 8 p.m.

The artists are sharing their work after two years of painting as a group and in Zoom meetings throughout 2020. The participants are Kirsten Benfield, Nancy Brody, Barbara DiLorenzo, Laurie Hall, Lesley Obrock, Janet Rojas, and Jerry Schwabe.

Talking Strong-Cuevas
The sculpture of Elizabeth Strong-Cuevas will be the subject of a free screening and panel discussion indoors at the Southampton Arts Center on Sunday at 4 p.m. The film, “Strong-Cuevas Sculpture,” directed by Lana Jokel, illuminates the artist’s sculptural language, which originates from the basic form of the human head but works multiple variations in iconography and scale.

The panel discussion and reception, which will follow the screening, will include Ms. Strong-Cuevas, Ms. Jokel, whose documentary subjects include numerous modern and contemporary artists, and Christina Strassfield, Guild Hall’s museum director and chief curator.

Embracing the Past
An exhibition of works by McDermott & McGough will open at Keyes Art in Sag Harbor Friday, with a reception from 6 to 8 p.m., and will continue through Oct. 2.

David McDermott and Peter McGough began their artistic collaboration in 1980 and have since become known for the way they blend art and daily life. On their website, Mr. McDermott says “I’ve seen the future, and I’m not going.”

Their photographs appropriate images from the late 19th to the mid-20th century. During the 1980s, they dressed and lived as gentlemen from 100 years ago, wearing top hats and detachable collars. Their obsession with the past is reflected in the subjects and styles they choose; they even give fictional dates to their works.

Hope and Remembrance
An evening of art, hope, and remembrance will take place Saturday from 5:30 to 7 p.m. at Christ Episcopal Church in Sag Harbor. Two works by Roz Dimon, “Pale Male” and “Nail This,” have been installed on either side of the church’s Tiffany glass window, “Jesus in the Temple With the Rabbis.”

“Pale Male” was inspired in part by Manhattan's famous red-tailed hawk of the same name, which has been celebrated on a website, in a documentary, and in books. The work, according to Ms. Dimon, is about “finding home when all is lost.”

30Squared Returns
“Summer Finale 2021,” the seventh annual art show and sale by 20 members of the 30Squared Art Group, opens today at the Water Mill Museum Art Gallery and will remain on view through Sept. 19. A reception will take place Saturday from 4 to 7 p.m.

The group was organized in 2014 to encourage artists to create one painting every day.