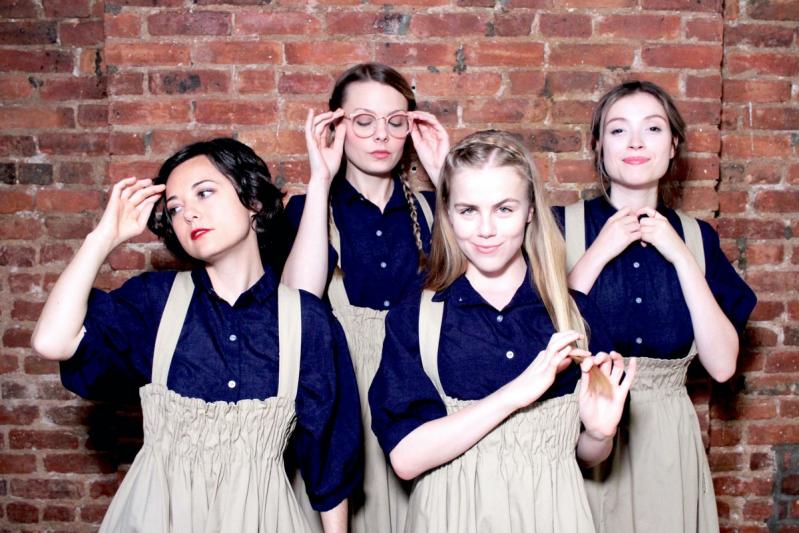 "Hitler's Tasters," a dark comedy about four young women enlisted to taste Hitler's food and risk dying for their country, will have three performances at Guild Hall.
By Mark Segal

“When I first heard that Hitler used young German women to test his food for poison, I thought, ‘Isn’t adolescence hard enough?’ ” the playwright Michelle Kholos Brooks told an interviewer when her play “Hitler’s Tasters” was shown at Edinburgh Festival Fringe 2019. “And what do girls discuss as they wait to see if they will live through another meal?”

Ms. Brooks’s reflections on those questions will take form onstage at Guild Hall with performances of “Hitler’s Tasters” set for next Thursday, Friday, Sept. 10, and Sept. 11 at 8 p.m.

Based on true events, the dark comedy explores how four young women navigate sexuality, friendship, patriotism, and poison against the backdrop of war. Like girls throughout time, they gossip and dream, they question and dance, and, above all, they want to survive.

“Hitler’s Tasters” won the Susan Glaspell Award at the 2017 Women Playwrights Series, was named “Best of the Fringe” by England’s The Stage newspaper, and enjoyed a sold-out run at the Edinburgh festival.

The director and choreographer Susan Stroman, whose own work was celebrated by Guild Hall last week, has called the play “one of the best evenings I’ve spent in the theater in a long time. It was interesting, entertaining, upsetting, and it made you think.”

Ms. Brooks’s productions have been staged internationally. Her play “Hostage” was a finalist for the Woodward/Newman Drama Award, “Chair” received second place in the Firehouse Theatre Festival of New American plays, and “Kalamazoo,” co-written with Kelly Younger, won the Reva Shiner Comedy award from the Bloomington Playwright’s Project.

Celebrating Guild Hall
“Guild Hall: The Sandbox (1931-2021)” is a 12-minute documentary that features commentary from artists, actors, community members, and Guild Hall staff and trustees about what has made the “creative sandbox” unique in its approach to the arts.

Produced and directed by Nick Goldfarb and James Salomon to commemorate Guild Hall’s 90th anniversary, the film is now available on its YouTube channel.