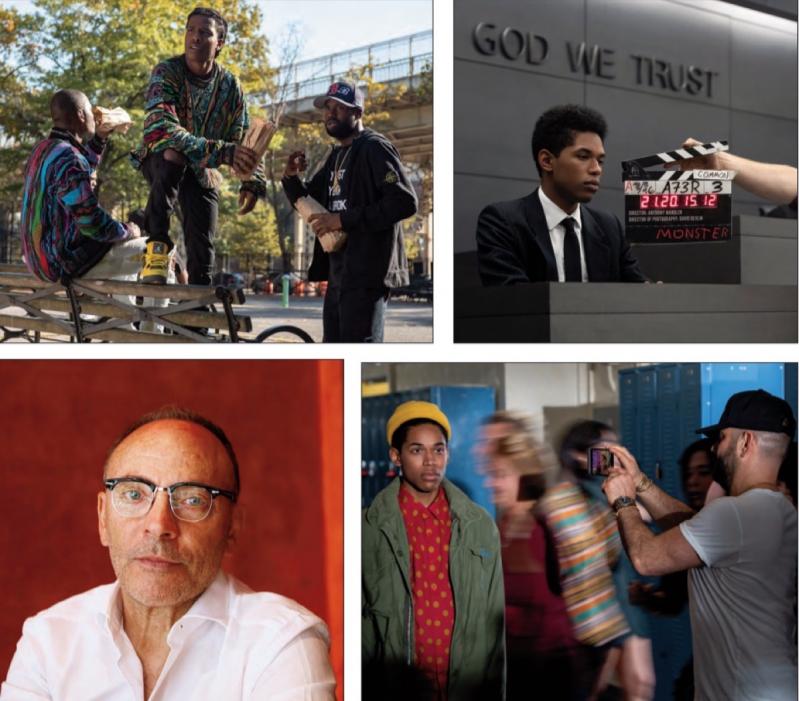 In scenes from Netflix's "Monster" are, clockwise from top left, A$AP Rocky, a.k.a. Rakim Mayers (center), and Kelvin Harrison Jr., who plays an honor student on trial for murder (at court and at school). The film, directed by Anthony Mandler, was the latest production project of Edward Tyler Nahem, above left.
David Giesbrecht and David Devlin/Netflix and Wolfgang Wesener (Edward Tyler Nahem) Photos
By Mark Segal

Although the path to the movie “Monster,” which was released on May 7 on Netflix, was a long one, the timing was fortuitous. As Gary Goldstein of The Los Angeles Times wrote, “ ‘Monster’ is a terrific film: a strong, absorbing, beautifully performed and crafted social drama that, unfortunately, proves even timelier today than when it was shot in 2017.”

The story of Steve Harmon, a 17-year-old Black honor student whose world falls apart when he is charged with felony murder, was adapted from a young adult novel of the same name by Walter Dean Myers. The project began to take shape in 2012 at a dinner for Barack Obama’s re-election campaign at the home of Spike Lee.

In addition to the president, the gallery owner Edward Tyler Nahem was there. Tonya Lewis Lee, the filmmaker’s wife, and her working partner, Nikki Silver, had optioned the novel. “Tanya and I spoke about it that night,” said Mr. Nahem during a Zoom conversation from his home in Sagaponack. “We embarked on the project.”

“Monster” was the fourth film on which Mr. Nahem worked as producer, but the first dramatic feature. And, as with his other film projects, he was actively engaged with the production, hiring the first writer, Radha Blank, a friend of his. “As a producer, there are always conversations with writers, meetings with potential directors. It’s amazing what it takes to get a movie made, to have all of the pieces fall into place at the same time.”

While he has been deeply involved in the production of two Broadway plays and three documentary films since 2008, he didn’t neglect what he referred to several times as his “day job.” Established in 1985, Edward Tyler Nahem Gallery exhibits modern, postwar, and contemporary art by such masters as Jean-Michel Basquiat, Willem de Kooning, Joan Mitchell, Cy Twombly, Helen Frankenthaler, Frank Stella, and many others.

Of his gallery, he said, “If somebody would have told me, even five years before I started to do this, that this is what I’d be doing, they could as readily have said I’d be able to figure out the formula for rocket fuel.”

The Nahem family moved around a lot while he was growing up but inevitably returned to Brooklyn, where he attended high school. He dropped out of Southampton College after two years to travel, with the intention of eventually returning to school, but instead, “I wandered, and continued to wander.”

He was at the legendary Woodstock and Altamont rock festivals in 1969. “Music was pretty much my entire life, music and counterculture,” he said. He subsequently traveled to Israel, where he lived on a kibbutz, then to San Francisco, and, eventually, Greece, where he met his first wife, Berit Reiss-Andersen, now the chairwoman of the committee that awards the Nobel Peace Prize.

Once settled in Oslo, Mr. Nahem opened his first gallery in 1979, which specialized in 18th and 19th-century Japanese art. While he traveled to Japan every year, he was also interested in Western art, although he didn’t start to become active in that field until the early '80s.

“The odd thing was, I never worked for anybody in this business, so from pretty humble beginnings I just started doing it. You buy a print or drawing for $100, and you make a $20 profit. I wish I could make 20 percent on the bigger things.”

“It was an extremely different art world in the late 1970s. It wasn’t sexy, it wasn’t the media darling or anything like that. I also wasn’t thinking that you can get rich from it. I had a passion for it and just started doing it.” He returned to New York and opened his gallery there in 1985.

Passion, for Africa and African music, has also informed his film and theater projects. His first film, “Youssou Ndour: I Bring What I Love” (2008), a feature documentary about the renowned Senegalese musician, came about serendipitously.

Mr. Nahem was at Joe’s Pub, where Mr. Ndour was playing. When he noticed somebody filming his show, his curiosity was piqued. The filmmaker was Chai Vasarhelyi, who, a decade later, co-directed the Oscar-winning documentary “Free Solo.”

“We met, she had this half-idea, she didn’t really know what the story she wanted to tell was. She was young at the time, 26 or 27. Not only was I interested in putting up money, I wanted to be involved. I’m a type-A guy from Brooklyn, nothing’s ever a hands-off experience.”

They wound up working together and traveling to Senegal. “I had been to Senegal several times before that, it’s one of my favorite countries in the world. We became very close to Youssou during this process, and four years later we had this film.”

Mr. Nahem's second documentary, “Incorruptible” (2015), dealt with an artist-led youth movement in Senegal aimed at protecting that country’s democracy. An attack on a school in Nigeria by Boko Haram led to “Waiting for Hassana” (2017), a short documentary featuring an account by one of the escapees.

“Every project has to have what I call the requisite RSVP, which stands for Redeeming Social Value Potential, where you hope you move the needle just a micrometer in terms of what goes on in the world.” That principle let to his involvement with the play “Fela!", which was based on the life of Fela Kuti, the Nigerian musician and human rights activist who created Afrobeat, a blend of jazz, funk, and African rhythm and harmonies.

When Mr. Nahem first saw it off Broadway, he was not involved in the production, but he eventually went to see the musical again. “I was so blown out of my seat. I had never experienced theater like that.” He joined forces with the producer Stephen Hendel to bring the play to Broadway, where it opened in 2009 and received 11 Tony Award nominations, winning three.

He was also a producer of “Eclipsed,” the story of five Liberian women and their struggle to survive near the end of the second Liberian Civil War. That play opened in London in 2015 and, later that year, at the Public Theater in New York, before moving to Broadway in 2016.

His current project, at the moment conceived as an eight-episode dramatic series, is about the death of Dag Hammarskjold, the second secretary-general of the United Nations, who died in a 1961 plane crash in what is now Zambia.

Mr. Nahem optioned the book “Who Killed Hammarskjold?” six years ago, and last year optioned a second book on the same subject, “The Golden Thread.” “It’s a gripping story, a massive whodunit, set at the height of the Cold War and the height of the Congo crisis. Once again, it’s about race, greed, white supremacy, the military-industrial complex, and big business you don’t dare get in the way of.”

As for his day job, that, too, continues apace. The gallery moved from 57th Street to 980 Madison Avenue in May, and is preparing to open “Primacy: The Washington Color School” next Thursday. Organized by the curator Dexter Wimberly, the exhibition will feature the work of nine Color Field artists from Washington D.C., among them Sam Gilliam, Morris Louis, Kenneth Noland, Kenneth V. Young, and Alma Thomas.

“It’s a handsome show that really dips into history,” said Mr. Nahem, who noted that while the movement was ascendent from the late 1950s into the early ‘70s, it has more recently been overlooked in postwar art history. The gallery is also preparing for Art Basel in Switzerland, which opens on Sept. 24.

Mr. Nahem is an avid collector as well as a dealer. “If you see something you love and can afford it, it’s hard to resist. I just don’t want to conflate collecting and selling art. I don’t sell from my own collection.”

He did admit to having an equal passion for his business, “because I never get involved with anything I don’t have a certain level of enthusiasm for. It’s not just merchandise.”

Before buying his current house in Sagaponack in 2012, Mr. Nahem rented in the same neighborhood for 15 years. He and his wife “love being at home. We don’t go out a whole lot,” and they generally avoid openings or galas while here.

For the past 32 years, though, one thing he has gone out for is a weekly Sunday-morning softball game in Bridgehampton. “Everybody lives for Sunday. Nobody cares who you are or what you do or how much money you have. Baseball is a great equalizer.”