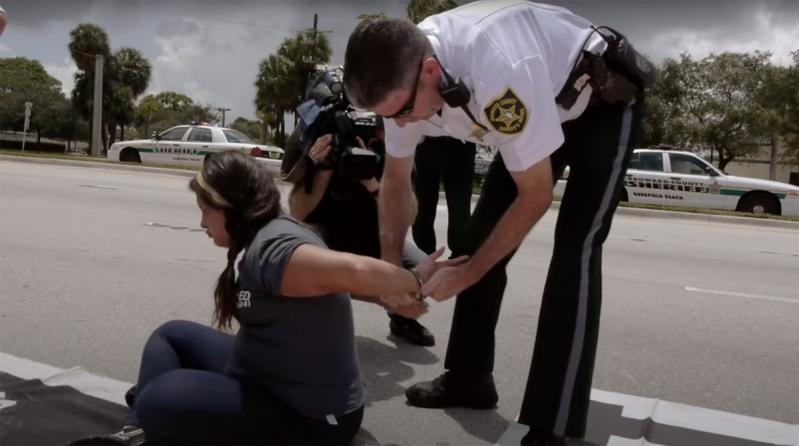 An ICE officer handcuffs a suspected illegal immigrant in "The Infiltrators," to be shown Saturday in Sag Harbor.
By Mark Segal

Organizacion Latino Americana (OLA) will present the 18th annual Latino Film Festival of the Hamptons, with screenings and conversations with the filmmakers, tomorrow at the Parrish Art Museum in Water Mill and on Saturday at the Sag Harbor Cinema. The festival includes feature films from Guatemala, Colombia, and the United States, as well as two short films produced by the OLA Media Lab.

The films are selected by a committee, said Minerva Perez, OLA’s executive director. Its members “look for films from different countries that are represented here, and for works with interesting story lines that people wouldn’t necessarily have seen.”

A theme for this year’s festival emerged after the films were chosen. “What they have in common,” Ms. Perez said, “is the theme of the pursuit of truth and the courage to speak it. They’re very exciting films; but none of them are soapboxy.”

Tomorrow evening’s program at the Parrish will begin with a reception and exhibition tour at 6:30, followed at 7:30 by an outdoor showing of “La Llorona (The Weeping Woman),” a film by Jayro Bustamante.

“La Llorona,” which has won 32 awards and 60 nominations, blends a dramatic portrayal of the horrors of the Guatemalan genocide with one of Latin America’s most famous folkloric legends, the ghostly weeping woman who cries for her lost children.

The screening will be followed by a videotaped interview featuring Mr. Bustamante, Sandra Dunn, OLA’s associate director, and Corinne Erni, the museum’s senior curator. Admission to the film, tour, and reception is $15, $5 for members and students. Guests have been advised to take their own seating.

The first of Saturday’s programs, at 7 p.m. at the Sag Harbor Cinema, will feature “Days of the Whale,” a film by Catalina Arroyave set in Medellin, Colombia. The story follows Cristina and Simon, two young graffiti artists who paint their city in part as a way to escape their dysfunctional homes. Tensions mount when they defy a criminal gang by painting over a threat written on a wall.

“Voices of Youth,” a short film written by Allura Leggard and produced by OLA Media Lab, will open the program, and a conversation via Zoom with Ms. Arroyave will follow the screening.

The cinema’s 9:30 p.m. program will open with “Myth and Motion,” a 28-minute video by Carolina Fuentes, also produced by the OLA Media Lab, that features uplifting images and music. It will be followed by “The Infiltrators,” a dramatic feature directed by Cristina Ibarra and Alex Rivera. When Claudio Rojas is detained without warning by ICE officials outside his Florida home, his family contacts the National Immigrant Youth Alliance, a group of activist Dreamers who try to stop deportations by infiltrating the detention center.

The film combines documentary footage of real infiltrators with scripted re-enactments of the events inside the detention center. The screening will be followed by a Zoom talk with Mr. Rivera.