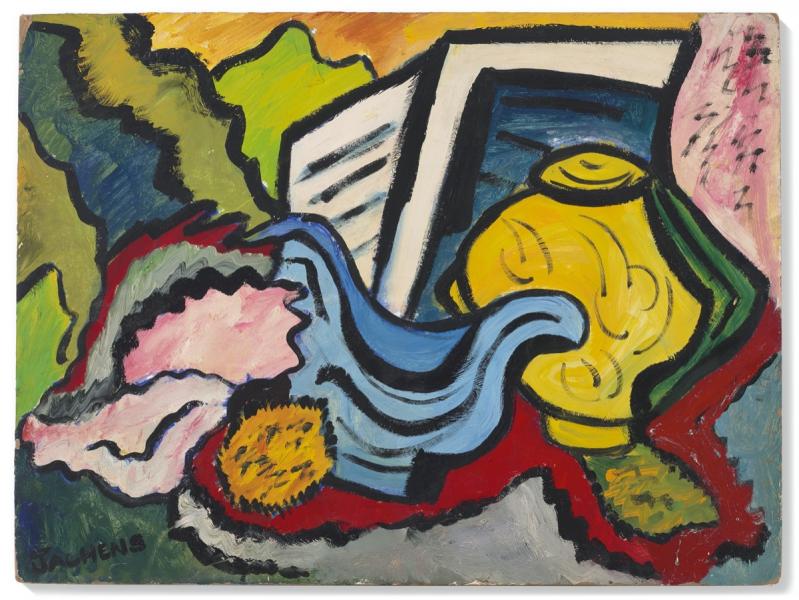 Grace Hartigan's "Still Life With Yellow Bowl" was painted in 1945, when she was still married to Bob Jachens.
By Jennifer Landes

Although the art galleries that flocked to East Hampton over the past year have received a large share of attention, the city art refugees in Southampton have made a bigger splash in terms of the spaces they command.

In addition to Phillips auction house in the old town hall building, once home to Saks and more recently Pottery Barn, there is Hauser and Wirth in an impressive two-story white box on lower Main Street, previously a boutique, and now Christie's auction house has chosen a pop-up location, a transformed midcentury stucco building formerly a garage.

Although all of the spaces make striking places to view art, the Christie's spot has a Miami, Los Angeles, or downtown New York City vibe, where a random industrial site is transformed into the choicest of reclaimed spaces. To underline its midcentury appeal, blue lighting runs along one of the decorative strips on the outside wall, making it look very hip indeed. If there are any left, the venerable ladies of old Southampton must clutch their pearls at every evening passing. In other words, it's a great place to show art.

Christie's has so far tied its showings to the local talent. Its first installation involved a variety of artists associated with the East End. Now, it is turning its focus to a single artist, Grace Hartigan, who has attracted quite a bit of attention in the past few years but whose general renown remains elusive.

This show will likely surprise viewers familiar with her through only the more popular Abstract Expressionist works. Here, the mostly self-taught artist is represented both before her break with naturalism, during, and then through the other side of full abstraction.

Hartigan didn't stick with nonobjective compositions for all that long, unlike some of her New York-based colleagues who kept at it for all of their careers. Teaching art in Baltimore, where she moved with her husband in 1960, may have separated her from the strictures of New York's avant-garde curators and critics. But her independent streak seems to have been there all along.

According to Michael Klein's essay in the exhibition's catalog, "for Hartigan, painting meant bringing the world into her fixed vision and then turning it out onto her canvases. There was life and there was art, and her art reflected the life she lived." The compositions "are not inventions, but observations distilled into color, shape, and form."

Expect to be bowled over by the late '50s oil-on-canvas works painted in the style that has become synonymous with her work. They mostly share space on the same wall. But things become a bit hinky as one moves through the gallery.

The collages on view with the paintings are a great surprise, and what one would hope they would be. The oil-on-paper works from earlier in the decade evince Hartigan's influences -- friends like Willem de Kooning, Franz Kline, and Jackson Pollock -- and an effort to integrate them into something resembling her own work. The early '50s still life on view is very pleasing, a blur of abstracted elements in a still-recognizable setting.

The earlier work from the 1940s is a mixed bag of trial and error. "Frustration" could be an abstracted "Madonna and Child" with unusual Fauvist touches of color mixing with the traditions of the Old Masters. Her Matisse-inspired still life from this period looks cartoonish, but not without its charms. A self-portrait in watercolor has hints of Arshile Gorky's mother, and not in a good way.

The latest work, painted to commemorate America's Bicentennial in 1976, is a rather large piece, with flat, loosely generalized figures striking up the fife and drums with flags in patriotic red, white, and blue, shot through with black. A modern-day fire hydrant brings this moment into the present. The presentation lacks Pop's commercial veneer, but Hartigan's treatment shares a similar ironic approach to subject.

Christie's has imbued this "selling exhibition" with the feeling of a serious curatorial enterprise, complete with fully illustrated catalog and commissioned essay. But there is still something haphazard in its contents. In the way auction houses have to rely on marketplace availability to assemble lots for a regular sale, this show feels like a grab bag, with knockout punches placed among other less accomplished pieces.

Still, there is something exciting in the offering, a chance to see a snapshot of a strong painter's practice over four decades. It remains on view through Sunday.