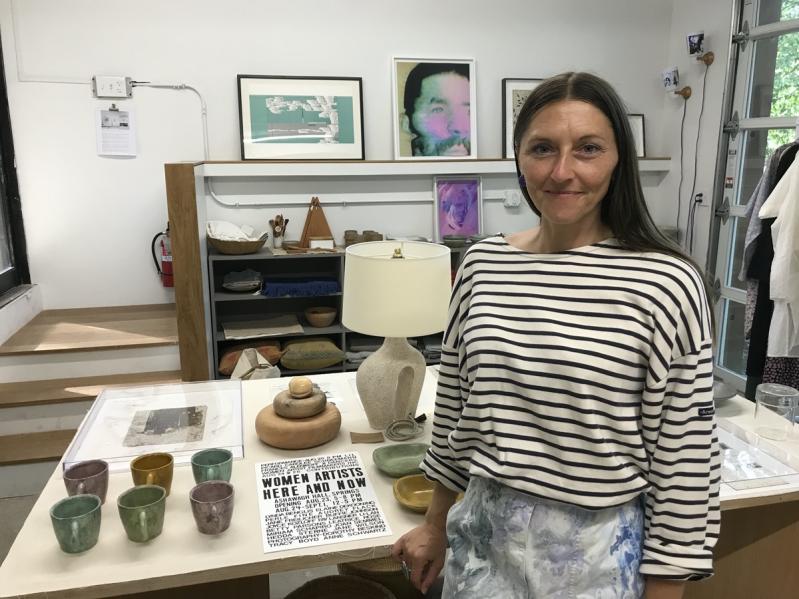 On the table behind Sara VanDerBeek is a poster for the 1975 exhibition "Women Artists Here and Now."
Mark Segal
By Mark Segal

Soft Network, a platform established by Sara VanDerBeek and Chelsea Spengemann for connective arts programming, is a moving target of sorts, which makes sense considering what matters to them is "breaking down conventions of where art is shown," Ms. VanDerBeek said during a conversation at S&S Corner Shop in Springs.

Soft Network has recently touched down at Broadway Gallery in TriBeCa and Halsey McKay Gallery in East Hampton. It developed "Artists on Camera 1967-2021," a film series available for streaming from the Metrograph Pictures website that was set for a screening at the Arts Center at Duck Creek in Springs until Tropical Storm Henri scuttled it.

The website of Rachel Comey, a fashion designer, has a link to Soft Network's offerings, and ArtFizz Projects, an online community of artists, includes an exhibition of work by Tamar Halpern organized by -- guess who?

But it is at S&S Corner Shop on Fort Pond Boulevard that a constantly changing exhibition of work from the 1950s to the present gives a fascinating taste of the breadth of Soft Network's mission. That location is significant not only because many of the artists in the show have past or present connections to the hamlet, but also because Ms. VanDerBeek's family lived on Fort Pond Boulevard from the mid-1970s until 1984.

Indeed, it was last year at Green River Cemetery in Springs, where her father, Stan VanDerBeek, an experimental filmmaker and multimedia artist, is buried, that the idea for Soft Network began to take shape.

"I was meditating, as an artist and teacher and as someone who is questioning it all right now, on what I can do, and I began to have an urge to program and engage with my community in the way I know how to work, which is through exhibiting."

She and Ms. Spengemann, who is the director of the Stan VanDerBeek Archive, developed the idea of working between the past and the present and between exhibition spaces and artists' archives.

The exhibition at S&S, "Interior Scroll, or What I Did on My Vacation," takes its title in part from a legendary performance by Carolee Schneemann, a multimedia artist, that took place in 1975 at Ashawagh Hall in Springs as part of the exhibition "Women Artists Here and Now."

The art historian Gail Levin described that performance in The Star: "Standing nude on a table, Schneeman painted her body and read parts of her 1974 text, 'Cezanne: She Was a Great Painter' . . . . Then she slowly extracted a paper scroll from her vagina while reading from it."

Organized by the artists Joan Semmel and Joyce Kozloff, that exhibition included, in addition to Schneemann, work by Lynda Benglis and Elaine de Kooning, Audrey Flack and Betty Parsons, Ms. Semmel and Perle Fine, among others. It was, in other words, intergenerational, and, since it included photography and performance, intermedia.

As Ms. VanDerBeek and Ms. Spengemann looked into that exhibition and spoke with Ms. Semmel and Ms. Kozloff, their research became not only about the exhibition but about "looking at the importance of community and artists' networks in supporting the realization of work."

"I've come to know that women in the 1970s were dealing with gender and media discrimination. Film and moving image were on the outer orbit, and there wasn't a commercial network for it, so it was really challenging." It meant that many interesting artists were being excluded from the discourse about art.

Another source of inspiration for Soft Network was an exhibition Ms. Spengemann and Ms. VanDerBeek organized at the Black Mountain College Museum and Arts Center in 2019. Black Mountain was an experimental college founded in 1933 in Asheville, N.C., that counted among its faculty and students dozens of influential and innovative artists until it closed in 1957.

One of those artists was Stan VanDerBeek, and the exhibition, "VanDerBeek + VanDerBeek" paired the work of Stan and Sara. "That was the first time we were engaging in a meeting of historic work and my work," and it encouraged Soft Network's ongoing pairing of the past and present.

Ms. VanDerBeek, who divides her time between Brooklyn and Springs, teaches at Cooper Union, where she earned her B.F.A., and at Pratt Institute. Two recent works of hers, "Ancient Woman XX" and "Ancient Woman XXI," were on view at S&S last week.

They are photographs of a female Roman head from the Louvre that she painted on and rephotographed before manipulating the color during the reprocessing, and then painted again on top of the previous layers. She noted that she pushed the color because the sculptures were originally painted with vibrant colors.

She remarked on her relationship to "this complicated form that is the foundation of a lot of issues—the beauty ideal, power, gender, race, class. I can't help but be mesmerized by the complexity of these forms, so I've done a whole series of looking at ancient female forms."

Several of the works from that series were also in a show at Halsey McKay that included work by Schneeman and Sari Dienes. A multimedia artist, Dienes, who died in 1992, is represented at S&S with several works, including "Ginger Rogers," a 1955 ink rubbing.

Typical of the connections suggested by the exhibition are a photograph of Ray Johnson by Anita Steckel. Johnson, who was well-known for his conceptual and correspondence work, is represented by several works, as is Steckel, who, like Stan VanDerBeek, went to Cooper Union and, when visiting the East End, stayed with Johanna VanDerBeek, Stan's first wife.

Johanna, who came to the East End in 1974, "is really our touchstone to the area," said Sara. While at Black Mountain College, she began to do food experiments and then "really moved into food" and cofounded Georgette's restaurant in Springs.

Speaking of Soft Network, Sara said, "It's important to us that there are these senses of lineage and overlap and connection. But it's also about continuum." What they are interested in is "not a preservation of the past, but it's very much about a dialogue with it."

The exhibition will continue to morph at S&S Corner Store, 11 Fort Pond Boulevard, through Sept. 26.

This article has been changed from the original and print version to include the address of S&S Corner Store.