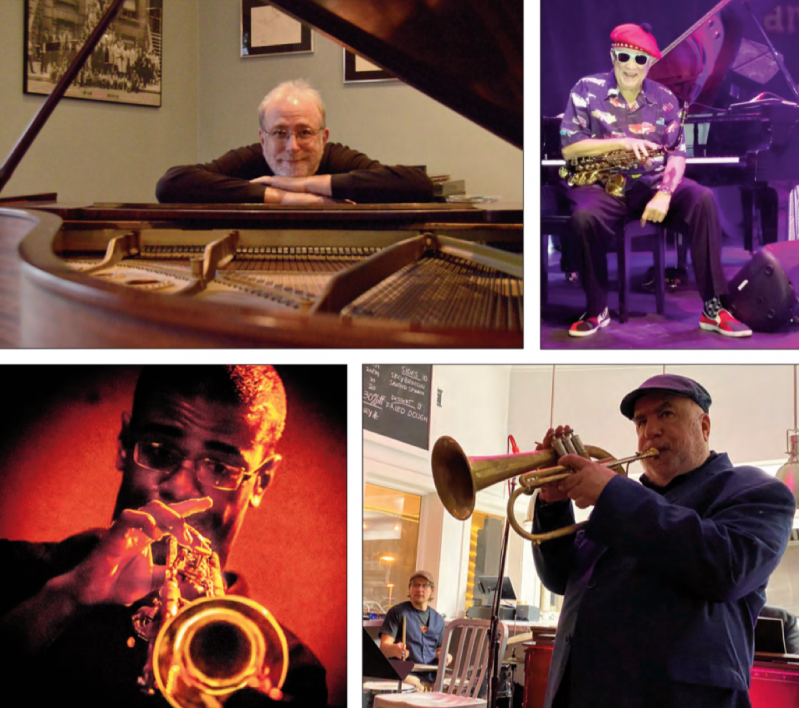 The first Hamptons Jazz Fest will bring renowned artists from around the world to a summer-long series of concerts from Southampton to Montauk. They include, clockwise from top left, Bill O'Connell, the artistic director, Paquito D'Rivera, Randy Brecker, and Baron Lewis.
Brenda Feliciano, Ric Kallaher, and Christopher Walsh Photos
By Christopher Walsh

Twenty years after the Montauk Jazz Festival brought several of the genre's luminaries to the Montauk Downs State Park for a one-day affair that was meant to become an annual event, an even more ambitious plan is fast taking shape.

Hamptons Jazz Fest 2021 will span July, August, and September from Montauk to Southampton, featuring some of jazz's most distinguished players from around the world in more than 50 concerts, most of which will be free. It will be, its organizers hope, the first of many, destined for recognition as an important cultural event akin to annual jazz festivals in Newport, R.I., and Montreux, Switzerland, or the Hamptons International Film Festival.

While rock 'n' roll and pop acts draw most attention at the South Fork's live music venues, jazz, the original, quintessentially American art form, is cerebral, subtle music that like its louder and repetitive successor has evolved to incorporate sounds and traditions of diverse cultures.

Bill O'Connell, a Latin jazz pianist who lives in Montauk, is the festival's artistic director. It was Mr. O'Connell who connected Claes Brondal, a drummer from Denmark who runs the Jam Session, with a donor, a lifelong jazz aficionado, to make the festival possible.

"This is a really wonderful thing for the Hamptons," Mr. O'Connell, who will also perform at the festival with his Latin Jazz All Stars, said last week. "It is long overdue. Hopefully, we can make it happen every year, now that we had the kick-start by our donor."

"In the '70s, when my friends were listening to Led Zeppelin, I was listening to Coltrane, Grover Washington Jr., Miles [Davis], all those artists," the donor, who owns a house in Wainscott but wishes to remain anonymous, told The Star last week. "I grew up playing saxophone, and it was a really important part of my life."

He played in jazz ensembles as a high school student before attending the Eastman School of Music at the University of Rochester. "I've spent my adult life listening to WBGO," a jazz station based in Newark, "and going to the Jazz Standard," the Manhattan venue that closed in December.

With a friend, the donor mused about launching a jazz club on the South Fork, and "how it would be a great way to lose money, how neither of us know anything about running a club, but it would be so much fun." The idea morphed into a series of pop-up concerts across the South Fork, "to give birth to this idea and see how it takes." Another donor is also funding the festival, he said.
"Coming out of Covid, we have been trying to reinvent how to do business," said Mr. Brondal, who lives in Sag Harbor. The question of how "is existential for musicians and people in the business. What does it mean to be a musician, to be human? How and when can we socialize again?"

As a not-for-profit organization, the Jam Session was a perfect fit for the donor. "I don't know about the nonprofit world," he said. "It was a pretty daunting challenge for me to start a nonprofit. I remember going to the Jam Session at Bay Burger on Thursdays," where he met Mr. Brondal and where Mr. O'Connell sometimes performed. This year, "I decided to make an investment. It's a roll of the dice, but I felt Claes's passion, and have watched Bill play a number of times -- he's a genius, musically."

The looming question, Mr. Brondal and his partners agree, is, "Can we, with a moment's notice, put on a mammoth festival?" But the donor's offer, he said, "is so hard to refuse, given what we've been dealing with. We said yes, let's give it shot."

Also to perform are Sejal Kukadia, who is from upstate New York but moved to India to engage in a four-year study of the tabla and is said to be the only female classical tabla soloist in the United States; Ada Rovatti, a saxophonist who is from Italy and lives in East Hampton; her husband, the renowned American trumpeter Randy Brecker, and Ravi Coltrane, a saxophonist and the son of the late musicians John and Alice Coltrane.

Participating venues are to include the Southampton Arts Center, the Parrish Art Museum and the Watermill Center in Water Mill, Baron's Cove and the John Jermain Memorial Library in Sag Harbor, the Hayground School and the Hampton Library in Bridgehampton, the Clubhouse and North 53 Gallery in East Hampton, and Gosman's Dock and Navy Beach in Montauk.

Important to the festival and apropos given the prevalence of Latin artists in the lineup, Mr. Brondal said, is its collaboration with Organizacion Latino-Americana of Eastern Long Island, "to try to bridge the gap with the Latino community. When you celebrate jazz, you celebrate so many cultures of the world."

The festival "will hopefully achieve escape velocity and attract future donors for next year and the year after," the donor said. "As an experiment, it's well worth it. I hope there are enough people, a critical mass in the community that grew up playing or listening to jazz that will appreciate the experience."

"Not only are the musicians starved to get out and play," Mr. O'Connell said, but "hopefully the public is starved, too. There's a lot of pent-up demand. We're going to have a great fest this summer."

But, he added, "the proof is going to be next year. Can we parlay this into fund-raising to get people to contribute?"