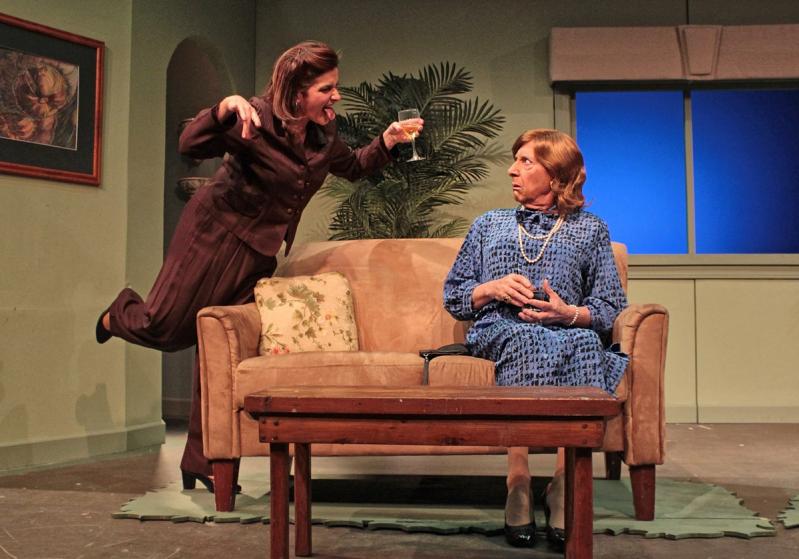 "Sylvia," a play by A.R. Gurney from 1995, opens with a middle-aged man being followed around a New York apartment by a young woman. Her gait is a strangely hunched over, and sometimes she seems to gallop as she walks. She tells the man she loves him, calls him "God," and says that he has saved her life. She rubs her cheek against his lap while he pets her head, telling her she's a "good girl."

For audience members who don't know the conceit of "Sylvia," your first inclination, no doubt, is to think that you are witnessing a psycho-sexual relationship between a middle-aged man and his young mistress.

What is odd and original about the play is that even after you discover that the young woman is actually a dog he's found on the street (personified by an actress), your inclination will not be entirely wrong.

"Sylvia," which runs through June 13 at the Hampton Theatre Company in Quogue, is the first production in over a year for this reputable company. The audience for the performance I witnessed was small -- half the seats were unsold because of social distancing -- but you could feel a palpable relief in the air that after a year of television burnout they were finally getting to see a live performance.

Even this overlong, sometimes lugubriously paced drama-comedy could not shake the good mood.

The premise is ingenious: the introduction of a stray dog as a wedge to expose the problems of a tottering middle-aged New York couple. Greg, who works in finance, finds the animal abandoned and feels an instant, almost obsessive bond. Perhaps this is because he has lost his connection to Kate, his wife of 20-plus years. Further aggravating things, her career as an educator seems to be booming, while Greg is deeply unsatisfied with his work. Kate wants the dog gone from their apartment, but Greg pleads for a few days' trial with the animal, and his wife relents.

As Sylvia, Amanda Griemsmann throws everything into what is nearly an impossible role (interestingly, Sarah Jessica Parker played the part in the play's Off Broadway premiere 26 years ago). She hops around, hands curled into paws, rolls on her back, pants, barks, and, most hilariously, screams obscenities whenever she spots a cat. That Sylvia can converse with humans is a bit of magical realism that seems odd at first, but soon becomes no stranger than the fact that the dog is portrayed by a woman.

Ms. Griemsmann's performance is the most successful in a play that, to this viewer at least, has some pacing problems. Diana Marbury, who has directed some of the most successful H.T.C. plays over the last few years, allows things to operate at a deliberate, laconic speed, and as a result the dialogue seems to lack the crackle and pop of great comedic timing.

It doesn't help that Gurney's play is simply too long, slowly wresting out his metaphors about the problems of human connection. Kate, for example, has an opportunity to teach in England for a semester and wants Greg to come with her. Dogs are not allowed, however, and so Greg, in full midlife crisis mode, announces that he can't go. Obviously, he feels his spiritual emptiness is getting more comfort from the dog than his imperious wife.

Even the most naive viewer will see this already. But Gurney's play brings Kate and Greg to a psychiatrist (well played by George Loizides, who does triple duty here with two other roles), solely so the doctor can explain everything to the audience.

Edward Case, as Greg, is an extremely likable actor, but neither he nor Catherine Maloney, who plays Kate, are entirely convincing as an uber-sophisticated Manhattan couple, the kind who are constantly referring to articles they read in The New Republic and The New Yorker. This is no small matter, as part of Gurney's point here is that for all their literary intelligence, the solution to their emotional crisis is out of reach -- except perhaps through Sylvia.

We don't feel that credibility in these performances, and this is most problematic in Ms. Maloney's Shakespearean asides to the audience, which are delivered without the fluid, pretentious flair with which they are intended.

Of course, these are fine actors who, through no fault of their own, have not been able to exercise their talents in over a year. A bit of rust should probably be expected. And there are, intermittently, plenty of laughs to be had in this production.

And best of all, it's live!