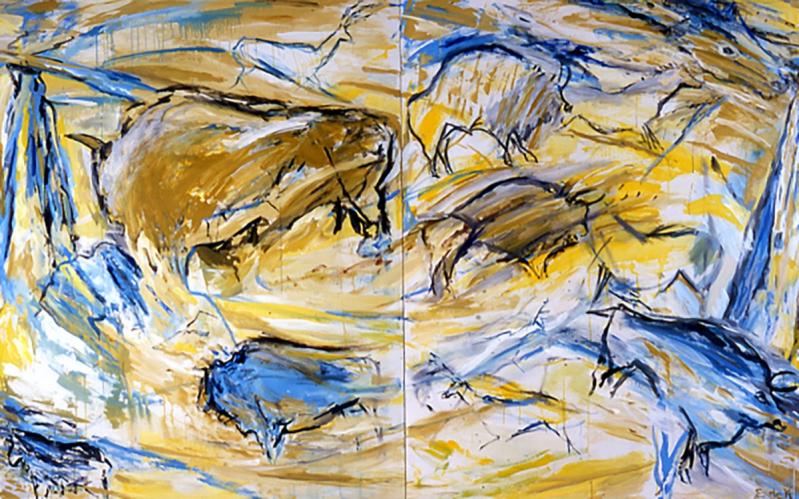 Elaine de Kooning's "Sun Wall" reflects her interest in the figure as a source for abstraction.
Parrish Art Museum
By Mark Segal

“Affinities for Abstraction: Women Artists on Eastern Long Island, 1950-2020,” an exhibition of work by 40 artists who have expanded the language of abstraction often through important innovations, will open Sunday at the Parrish Art Museum in Water Mill and remain on view through July 25.

During the formative, male-dominated years of Abstract Expressionism, women were often relegated to a secondary role that diminished their work and careers. A telling example was “The Irascibles,” Nina Leen’s iconic 1951 photograph for Life Magazine of 15 artists of the New York School, only one of whom, Hedda Sterne, was a woman.

“Affinities for Abstraction,” which has been organized by Alicia G. Longwell, the museum’s chief curator, crosses time periods and generations to reveal the connections between acclaimed early innovators and subsequent generations, including 19 artists working today.

Frankenthaler, for example, invented a lyrical type of color field painting through her process of unrolling unprimed canvas on the floor and flooding it with paint that seeped into and stained the fabric. Krasner combined lyrical form with sensuous application of paint, while Mitchell brought influences from nature into her largely self-referential paintings. Hartigan’s canvases were filled with active gesture, but she never abandoned content, and de Kooning maintained an interest in the figure as a source for her abstract paintings.

More recently, women of color, including Howardena Pindell, Nanette Carter, and Virginia Jaramillo, are among the painters who have lent relevance and vitality to the language of abstraction. Among the other painters continuing to expand the vocabulary of painting are Joan Snyder, Sue Williams, Amy Sillman, and Mary Heilmann.