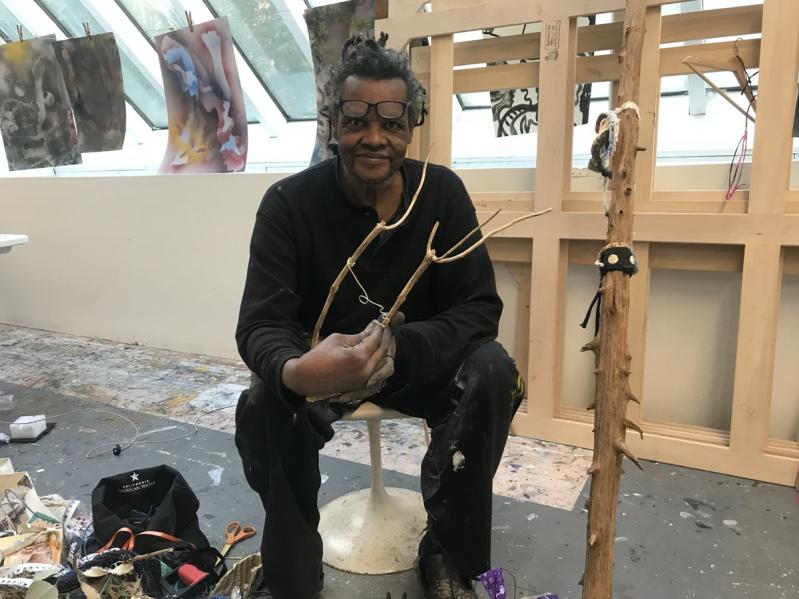 Lonnie Holley at work on a wood and wire construction in the studio at the Elaine de Kooning House.
Mark Segal
By Mark Segal

During Lonnie Holley’s residency at the Elaine de Kooning House in East Hampton last November, the self-taught artist and musician took advantage of the solitude to create more than 100 paintings, works on paper, and sculpture. However, the prospects for exhibition were nonexistent at the time.

Now that most museums and galleries are up and running, two opportunities to witness the fruits of his labor are here, with exhibitions opening at the Parrish Art Museum in Water Mill on Saturday and the South Etna Montauk Foundation on May 1.

The Parrish exhibition, “Everything That Wasn’t White: Lonnie Holley at the Elaine de Kooning House,” will include some 40 works by Mr. Holley, who combines recurring imagery from his life, found objects, and unconventional materials and approaches to create art layered with personal meaning.

Mr. Holley has also been making music since the early 1980s. Its improvisatory nature is akin to that of his sculpture and painting, and is rooted in centuries of Southern African-American culture as well as his own experience. Just as each artwork is unique, so, too, is each of his performances.

Tomorrow evening at 6, the Parrish will present a live-streamed evening of conversation between Mr. Holley and Alicia Longwell, the museum’s chief curator, who organized the exhibition, interspersed with his improvised vocal and keyboard music, which will be accompanied by Washington Duke on percussion.

Mr. Holley was born in Alabama in 1950, one of 27 children. From the age of 5, he worked at such odd jobs as grave-digging, picking up trash at a drive-in movie, washing dishes, and picking cotton. As an adolescent, he spent two and a half years at the infamous Alabama Industrial School for Negro Children.

His first sculptures were tombstones carved for a niece and nephew who died in a house fire in 1979. When he drove his truck, which had 120 pieces on it, to the Birmingham Museum of Art, the registrar summoned the director. The museum now has nine pieces of his in its collection, including two of the sandstone carvings.

William Arnett, a noted collector of antiquities, visited Mr. Holley’s studio in 1986, immediately purchased an artwork, and 10 years later the artist was included in the landmark exhibition “Souls Grown Deep: African American Vernacular Art of the South,” which was organized by Mr. Arnett. Mr. Holley's work is now in many important museums and private collections, including the Souls Grown Deep Foundation.

The sculptures in the Parrish exhibition were made largely from objects found on the property of the de Kooning house, including not only branches and twigs but also green wire fencing, swatches of fabric, quilt pieces, and diaper pins. The show, which will continue through Sept. 6, also includes quilt paintings, paintings on canvas, and works on paper.

The South Etna exhibition, “Lonnie Holley: Tangled Up in de Kooning’s Fence,” will feature, in addition to sculpture and works on paper, a number of quilted paintings he made during his residency in East Hampton. Many of these depict schematic human forms, including facial profiles made with stencils and black-and-white spray paint.

Several large paintings on canvas that utilize his silhouetted figuration and layering of forms will also be in view in the Montauk show, which has been organized by Alison M. Gingeras. The exhibition’s title is borrowed from one of Mr. Holley’s works on view, an assemblage of wood, roots, canvas, thread, mop string, paint, and copper and aluminum wire.

The exhibition will remain on view through Aug. 29.