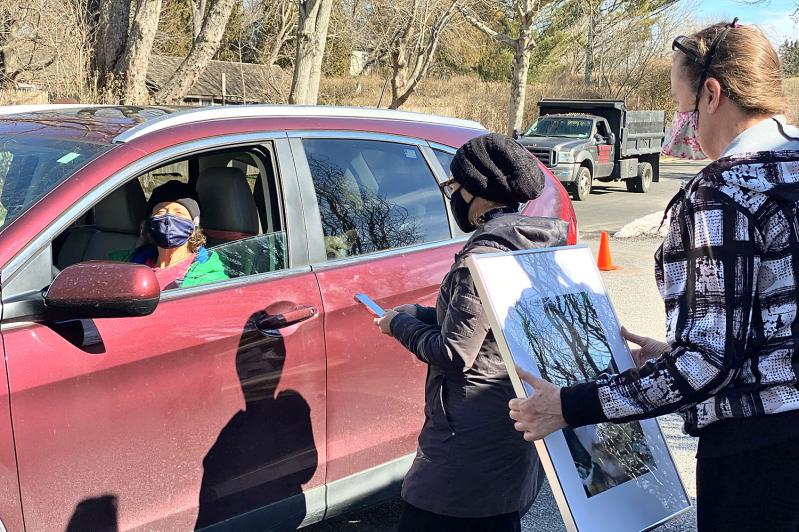 Eva Iacono was one of the artists participating in the drive-thru art drop off for this year's Guild Hall members show. Accepting her submission were Tina Jones and Lisa Weston.
Amy Kirwin
By Jennifer Landes

In one of the East End art world's most consistent and democratic traditions, Guild Hall will hold its 83rd Artist Members Exhibition beginning Saturday.

The exhibition, which is open to all of the museum's artist members, attracts more than 400 entries every year in every medium, limited only by size. Weekend painters can find themselves next to regularly shown and critical darlings of the regional art scene while eminent curators, critics, and academics from away are brought in to deduce which works are worthy of distinction.

This year's awards juror is Antwaun Sargent. A writer, critic, and lecturer with a focus on issues of identity in the work of artists of color for the past 10 years, he was named a curator and director of Gagosian, the multinational gallery juggernaut, in January. Based in New York, he will organize exhibitions for the gallery's locations in the United States and around the world in addition to writing for its publications and developing panels and events.

At the time of his hire, he told The New York Times, "I have always been interested in the ways in which we can reframe the conversation around some of the voices that have been left out," adding, "I'm also interested in notions of community and how artists work within communities and how works are informed by their links to community."

He will determine who has the best works in the categories of abstract, representational, photography, work on paper, sculpture, mixed media, new artist, landscape, and the much-coveted top honors, which comes with its own solo museum show at a later date. He can also bestow up to 10 honorable mentions.

Last year's show opened merely days before the Covid shutdowns went into effect. For months, that exhibition was available as an online event only but stayed up long after the original closing date in April. Then it was available to view in person again once the museum reopened its doors during the summer.

This year, the museum will put the exhibition online again, with opportunities to purchase works, even though it will be open Friday through Sunday for in-person visits. Tours and talks will also be available online. Purchase of timed tickets ahead of time on the Guild Hall website is recommended as gallery attendance will still be limited because of health concerns. The show will be installed through April 10.