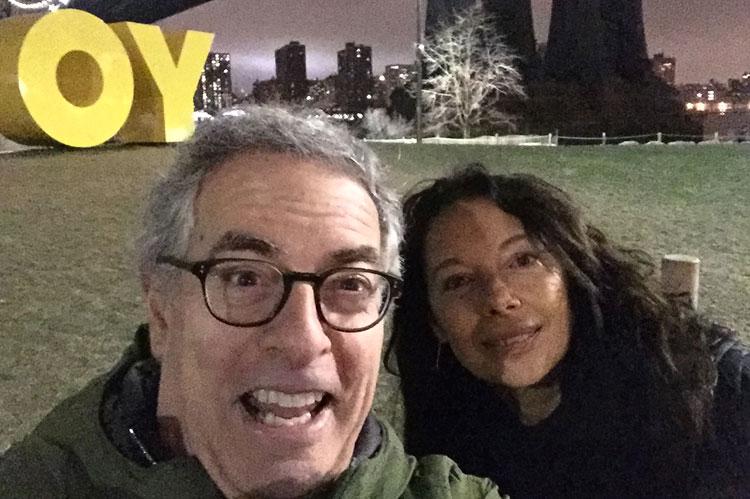 Jeremy Warshaw and Judy D'Mello, who are longtime friends, have begun releasing episodes of their new podcast about loneliness, "Is Anybody Out There?"
By Jennifer Landes

Podcasts, which were a niche entertainment product only a decade ago, have exploded in popularity in the few short years after the phenomenal success of "Serial" in 2014. Statistics available on sources across the internet put the number of registered podcasts at two million, with 850,000 of them considered active at the beginning of last year. Their popularity is noteworthy because their generally young, affluent, and well-educated audience is a very desirable demographic to advertisers.

The pandemic and the free time generated by its associated lockdowns have given rise to many, many more. Launched on Feb. 10 and focused on loneliness, "Is Anybody Out There?" is one of particular use during this time of human distancing. Hosted and produced by Judy D'Mello and Jeremy Warshaw, it had its genesis even before Covid-19 hit these shores.

Ms. D'Mello, who has been a writer and editor for The Star, has been friends with Mr. Warshaw since 1989, when they were both working in advertising for Saatchi & Saatchi. As transplants from the United Kingdom, loneliness "tied into many conversations he and I have had about missing the U.K. and never really feeling like this was the place we were going to spend the rest of our lives," she said during a recent phone conversation.

Even more relevant were the hours Mr. Warshaw was spending at an organization called Covia that connects older Americans who live alone with volunteers around the country to chat over the phone. In the intro to the first episode, an older woman talks about life on her own. "I do get down and sad and miserable. . . . It's very difficult to live alone." She speaks some more and there is a pause. "Are you there?" she asks to the person she is addressing. "We are, Edna," Mr. Warshaw responds as he welcomes listeners to the program.

Their research showed "it's a huge issue for a lot of people, and it costs the health care system millions and millions of dollars," said Ms. D'Mello. Even before the pandemic, "61 percent of the population in the U.S. reported feeling lonely at some point in some form." There was so much material out there about it, the question became what to do with it.

After the lockdowns, a podcast appeared the best way to communicate all that they had learned. "A human voice comes through, as opposed to writing an article or sitting at a computer looking at resources," she noted. "The human connection might actually help somebody." She had also completed the podcast fellowship offered by Stony Brook Southampton and had all the equipment.

In June, they began their interviews with not only experts, but people who had notable experiences with loneliness. It's not just those over 65 who are disproportionately lonely either. The 18 to 35 demographic has one of the highest reported levels of loneliness as well. "It's a U-shaped figure that happens in studies. At the one end of the U is seniors and at the other end, 18 to 35-year-olds." The finding shocked them, she said, and they devoted their third episode, "Hashtag Lonely," to it. It was released on Feb. 24.

In the first episode, "Snapshots of Loneliness," which functions as an overview, they feature Emery Bergmann, whose video on being lonely in college attracted almost a half-million views on YouTube. There are many apparent causes, but at a time when young people are expected to find their "squad," many are having difficulty making those real-life connections and friendships.

"Now, they're just seeing the best part of their friends' lives online. It's one great highlight reel," Ms. D'Mello said. There is some discrepancy between the experts who think this is mostly or all social media's fault and those who note that this age group also pays more attention to their feelings than generations past.

"I certainly didn't think about it when I was younger," Ms. D'Mello recalled. Yet, looking back on it, she realized that her own experience as an immigrant to the U.K. did cause some disconnection and loneliness, she just didn't know it at the time. Conversely, "They're talking about loneliness and are more attuned to it."

That can only be a good thing, because loneliness has an ingrained stigma that is only beginning to fall away. Ms. D'Mello recalled her struggle with postpartum depression after her son was born 20 years ago. "At that time, I was so shamed by what I was feeling, even though it was only a chemical reaction." The condition has since been destigmatized, but she said loneliness is now where postpartum was back then. "It's so shameful and disguised, yet we need to discuss it openly" in order to address it. "People shouldn't be suffering because they're too ashamed of it."

They've assembled a group of professionals to provide music, logo art, and editing for the pod, and it shows. It's tight and tells its story well. "We knew if we had any hope of getting noticed . . . we would have to put some time and effort into it." A lot of favors were called in by Mr. Warshaw, who has directed commercials and made a lot of connections over the years.

A couple of Ms. D'Mello's favorite episodes involve an interview with a Buddhist therapist who believes the only way out of any condition is to sit through it consciously without medication, and a Swedish filmmaker who made a documentary about why her country has the highest rates of loneliness.

With so much competition out there for ears and advertisers, she said this may not be the project that breaks through. "We don't have a particularly sexy topic." After mentioning a new Paris Hilton podcast that is attracting a lot of buzz, she acknowledged "we don't have that star power. We're not cultural icons."

Before they can even approach advertisers, they will need analytics. She said most want data over several episodes. This series may not be long enough to generate that kind of information. They will take what information they can gather after three episodes and knock on some doors, like Cigna or other entities that have invested in mental health. They may be long shots, but she said she was encouraged by the more than 100 downloads it received during its first 36 hours on word of mouth alone.

They have also launched a platform called the Connectery, which is tied to the podcast but independent of it, for other projects and anything outside the podcast that touches on the subject of loneliness.

They cover a lot of ground, including solutions such as using urban planning and community programs to bring people together. It's already happening in countries like Canada and Australia, and even in West Coast states here.

"We want to try to put the onus on policymakers . . . to get them to do something about it. It's not really our fault we're lonely, it's a human condition." She paused, then added, "We have all these lofty goals."