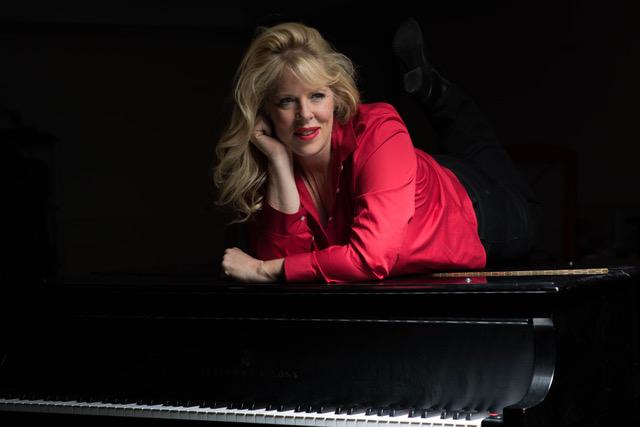 Although her career has taken her around the world, Valerie diLorenzo returned nine years ago to the house her father built in Sag Harbor, and she hasn't left.
Dane DuPuis
By Mark Segal

Valerie diLorenzo remembers seeing the movie “Oliver!” at the Sag Harbor Cinema years after it was first released. Eight years old at the time, she told her mother, “Someday I want to play that girl in the red dress.” And she did, playing Nancy twice, once at the Pennsylvania State Theater in Allentown, and once at a theater in Westchester County. She still has the red dress to prove it.

Ms. diLorenzo is well known to East End audiences, having brought her vocal gifts to the stages of the Southampton Arts Center, Guild Hall, the Bay Street Theater, the Suffolk Theater in Riverhead, the Southampton Cultural Center, and the Westhampton Beach Performing Arts Center, among others.

Since committing to full-time work in 1993, she has appeared in more than two dozen musicals off Broadway and in regional theaters around the country; been a fixture on the New York City cabaret circuit, developed a portfolio of musical revues, and, since 1995, sung the national anthem for the New York Mets (more on that later).

Growing up in Yonkers, N.Y., Ms. diLorenzo was exposed early to a variety of music. “My grandmother was very into Tom Jones, Engelbert Humperdinck, and Elvis Presley, my father was a cellist who loved opera, and both my parents were really big into musical theater,” she said during a recent conversation at her Sag Harbor home. Not long after seeing “Oliver!” she discovered that her parents had the original cast albums from dozens of musicals. “So that’s how it started.”

Years later, at 15, she saw “A Chorus Line” on Broadway, with its cast of aspiring singers and dancers, and began dreaming of a career onstage. Her parents didn’t discourage her, but they did insist she go to college, and she earned a degree in communications with a minor in theater from Fordham.

Once out of college Ms. DiLorenzo got into community theater, mostly in Westchester County. She had an acting coach, a singing teacher, and took classes in scene study. When she went into the city for auditions, her father went with her.

“It was a way for us to bond,” she said. “One day he said he wished my brother and sister and other people could see what I had to go through. Sometimes you get to sing an entire song, sometimes you’re out in five minutes. I don’t think I ever got used to the whole audition process.”

She wasn’t ready to make the leap to a full-time singing career, so she took a job as a meeting and special events planner for Random House, traveling the world and staying in first-class hotels for four years. That led to a stay in London, where she took an M.B.A. with a concentration in hospitality, in preparation for work in the hotel industry.

Back in the United States during a recession, the future stage star wasn’t happy with her P.R. job for an arts organization and made the life-changing decision to leave the nine-to-five world behind. Since then, she said, she's been steadily in demand -- except for two out-of-work spells, when she told herself, “That’s it, I can’t take the business.”

Both times, just as she was about to start looking for a regular job, calls arrived. “One time it was, 'Can you come and do ‘Annie’ and play Miss Hannigan?' And I was, 'My god!' ” In all, she has done “Annie” seven times.

Her father built a vacation house in Sag Harbor before she was born, and the family spent weekends and summers there. “Nine years ago my father got sick, and I came out to visit him in August. I never left.”

Ms. diLorenzo has starred in theater, cabaret, and musical revues, but “there’s nothing like being in a show,” she said. “Especially in summer stock or regional theater or doing a tour, when you’re immersed in that world, in that character’s life, and the people you’re with are your family. The most important thing for me has always been connecting with people.”

In 2017, the hundredth anniversary of women’s suffrage in New York State, Penny Wright of Southampton's Rogers Memorial Library was developing a roundtable with the League of Women Voters of the Hamptons and decided it needed a musical component. She knew who to call.

“We premiered ‘Ladies of Liberty’ on Nov. 17, 2017, at the Southampton Arts Center,” said Ms. diLorenzo. “It was only six weeks after the #MeToo movement, so there was this whole extra added intensity.” She researched the suffrage movement, created the program, and has performed it throughout New York State, as well as in Pennsylvania, Connecticut, New Jersey, and Florida.

The songs range from classics written early in the 20th century to modern tunes such as “You Don’t Own Me” and “It’s a Man’s World.” Between numbers, she talks about the suffrage movement and shows photographs of the people she’s talking about, among them Mary Katharine Goddard, a printer who in 1777 made the first copy of the Declaration of Independence that included the names of the signatories.

Ms. diLorenzo was set to bring the program to the United States pavilion at Expo 2020 Dubai before the event was derailed by the pandemic. Plans are moving forward to launch it instead in November, when the U.S. pavilion will focus on music, art, and theater specific to American history. She has been invited to perform “Ladies of Liberty” there.

She also developed Standard Fair, a revue series modeled after the 92nd Street Y’s Lyrics and Lyricists programs, in collaboration with Barry Levitt, who was the Y’s longtime music director. The series debuted at Guild Hall in 2017 with a program of Jerry Herman’s music, which then traveled to venues in New York City.

Mr. Levitt suffered a fatal heart attack not long after the premiere, but Ms. diLorenzo carried on, presenting programs at Guild Hall devoted to the music of Kander and Ebb, Jule Stein, and the Barbra Streisand songbook. She hopes to resume the series once the pandemic allows.

One project going forward is a new album she is recording at Cynthia Daniels’s MonkMusic Studios in East Hampton. The album includes some songs that are well known, but also several given to Ms. diLorenzo that have never been published, including one from Bob Gaudio of Frankie Valli and the Four Seasons, and an out-of-print Aretha Franklin number.

About those Mets? “I’m a Mets fan, so I called them up.” She submitted a tape and was called to rehearse at Shea Stadium. “I went there with my dad, and for him, walking out onto the field was like walking on hallowed ground.” She has been singing the national anthem there twice a year.

She gets free tickets, V.I.P. parking, and access to the dining club each time. “It’s exciting, but one of the hardest things I’ve ever had to do.” Not because of the wide vocal range the anthem demands, but because “there’s me, there’s reverb here, there’s reverb there, and there’s echo behind you.” She wears earphones so she can focus solely on her voice.

Ms. diLorenzo has amassed a vast collection of sheet music and script scores. “When I learn about a song that’s out of print, I’m like a dog with a bone. Somebody sent me a recording of a Cass Elliot song, ‘I’m Coming to the Best Part of My Life,’ and I thought, I’ve got to sing this song.” Within three days, she succeeded. “I have the chart, I have the sheet, and I already have my set list for my show for when we get out of lockdown. I’m ready to go, I just need the venue!”