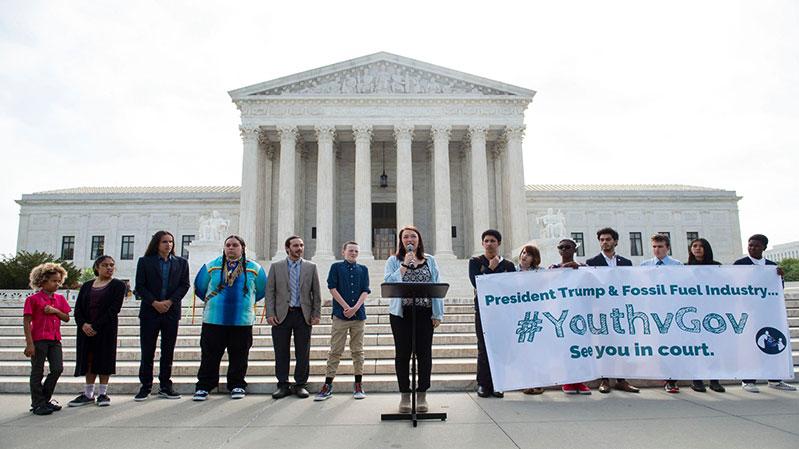 Kelsey Juliana, center, and other plaintiffs in the lawsuit against the United States government outside the Supreme Court building in Washington, D.C.
Robin Loznak
By Mark Segal

"I think for a lot of young people right now, life is really scary, because we've never seen a moment like this in history. And our feelings about our life and our future is all because of choices that we had no participation in. And so the plaintiffs joined this case, because we all know who's to blame and what needs to be done." So says Kelsey Juliana about climate change early in the documentary "Youth v Gov."

Ms. Juliana's comments are followed by archival clips of every president from Carter through Obama stressing the need to leave the world a better place for future generations. The film goes on to demonstrate convincingly that the actions of those presidents did not match their words. In effect, the government has for decades made the world a better place for the fossil fuel industry.

"Youth v Gov," the first feature by Christi Cooper, follows Juliana v. United States, a lawsuit filed by Our Children's Trust on behalf of 21 young people ages 13 to 24, including Ms. Juliana, who is the lead plaintiff. The suit contends that through the government's actions that cause climate change, it has violated the youngest generation's constitutional rights to life, liberty, and property, and failed to protect public trust resources.

Dry as that might sound, the film is anything but, thanks in large measure to the passionate, articulate young people whose enthusiasm for their cause is contagious. Moreover, the legal team, led by Julia Olsen, is unwavering in its commitment to securing the rights of children to a safe future, despite the determined opposition of the Department of Justice.

"Youth v Gov" will be available for streaming in the HamptonsFilm virtual screening room from Friday through next Thursday as part of its Air, Land + Sea series of films that foster a deeper appreciation of the planet. The film will be followed by a conversation among Ms. Cooper, Olivia Ahnemann, the film's producer, and David Nugent, the artistic director of HamptonsFilm.

Ms. Cooper, who holds a master's degree in microbiology and a Ph.D. in neuroscience, was doing stem cell research in Germany and Sweden when she became interested in exploring how to better communicate to a more general audience how stem cells were being used.

While her grandfather and uncle are both filmmakers in Germany, it wasn't until she learned about the M.F.A. program in science and natural history filmmaking at Montana State University that she decided to combine her science background with storytelling.

While still in the M.F.A. program, she joined an internship with Witness, a human rights organization focused on using video for social change. In 2011, she co-created Witness's Trust campaign, a series of short documentaries featuring young plaintiffs suing their state governments over climate change.

"That was my entry point into not only climate litigation and using the judicial system in this way, but also working with young people," Ms. Cooper said during a phone conversation. "I think young people don't have the political blinders that older people have. They're really looking at these issues coming from a pure justice standpoint of right and wrong, and to me that's really refreshing."

When Juliana v. United States was filed in the U.S. District Court for the District of Oregon in August 2015, "I was intimately following it. I knew some of the plaintiffs and I knew the lead attorney, and I always thought it would be an interesting feature story to tell, but I waited until they won the first motion to dismiss hearing in April 2016. That was when I had a sense the case was going to go somewhere."

Over the next four and a half years Ms. Cooper and her crew shot more than 200 hours of original footage and went through hundreds of hours of archival film. She worked closely with two editors through the post-production process, "trying to figure out how to put this story together."

The film moves seamlessly from the legal team's development of its arguments to interviews with climate scientists to scenes of the kids demonstrating, preparing to go to court, celebrating their triumphs, and persisting despite setbacks. Perhaps most compelling are segments of individual kids, many of them from marginalized communities, who recall their direct experience of wildfires, hurricanes, floods, and other natural disasters that threatened their families.

"Youth v Gov" concludes after the Ninth Circuit Court of Appeals "reluctantly" decided, in a two-to-one decision issued in January 2020, that despite the case's merits, the requested remedies should be addressed by the executive and legislative branches rather than the courts.

` The story is far from over, however. The plaintiffs and their attorneys plan to take their case to the U.S. Supreme Court. While Ms. Cooper will be following future developments closely, she felt it was time to "put the story out there . . . and people could continue to follow the case."

The film was shown at the Doc NYC Film Festival in November, and will be screened at a number of upcoming festivals, including the Environmental Film Festival in Washington, D.C. later this month.