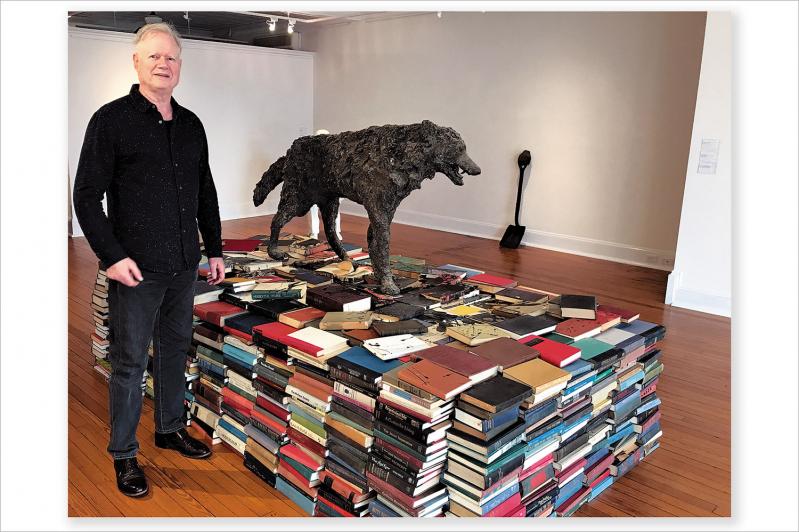 James Croak placed a cast dirt wolf on a pile of books "to show what philosophy can't grasp."
Mark Segal
By Mark Segal

In 1985, shortly after moving from Los Angeles to Brooklyn, James Croak was inspired to work with a new and unlikely sculptural material: dirt.

Earlier in his career, he had witnessed taxidermists mixing sawdust with glue to create forms that could be molded before hardening. “I didn’t have any sawdust around,” he said during a recent conversation, “but somebody had been excavating next door to where I was living. So I loaded a pail with dirt, dumped it on the ground, and made something -- I think it was a head -- out of dirt and glue. I had never heard of anybody doing that before.”

Several failed attempts to repeat the process led to the realization that moisture had to be baked out of the dirt before it could be mixed with the glue. “Dirt Man With Fish” from 1986 was his first successful life-sized cast-dirt figure. Over the next decade, babies, windows, hands and arms, wolves, tools, mythical creatures, and other human figures followed.

The complex process involves an armature of steel and aluminum and molds of rubber or plaster, into which the dried dirt is poured after being mixed with the binder. “Dirt activates flesh more than any other sculpture material, whether it be resin, bronze, plaster, or plastic,” Mr. Croak said. “Nothing creates the resonance of the object as much as dirt, at least for me.”

Sculpture wasn’t his first creative venture. As a teenager in the mid-'60s, he became a classical guitarist, “largely self-taught from books and recordings, since there was nowhere else to study it at the time.”

He was living in Cleveland, an important music center, where Andres Segovia performed every year. At 15, Mr. Croak was accepted into a small class with the guitar master and spent three days studying with him.

A year later, the teenager performed at the 1968 Olympics in Mexico City as part of a cultural program featuring distinguished musicians from all over the world. While there, he jammed and subsequently performed onstage with another guitar virtuoso, Doc Watson, and his son, Merle.

Because there was no such thing as a guitar major in colleges at that time, and only two colleges in the country where it was even taught, Mr. Croak decided it wasn’t a viable career path. Instead, he attended the University of Illinois in Chicago, creating abstract sculpture in aluminum and earning a degree in studio art in 1974. Two years later he moved to Los Angeles, setting up in an historic fire station on the city’s Skid Row.

“In college, the whole idea was to introduce you to modernist abstraction and beat out of you whatever figuration you had in you. Figuration was viewed as a lower form of consciousness.”

By the end of that decade, he said, he'd realized that “there’s a point where any object can be considered an abstract sculpture.” He waved toward the gallery’s baseboard for an example, “which somebody’s probably already done! Whereas figuration was more defined, you could define what you were working with.”

Talk about a change in direction: In 1981, Mr. Croak created “Vegas Jesus,” a monumental form in the shape of the Greek letter omega, to which he attached a twisted cross, a stuffed sheep chained to the cross, an American flag, cutouts of the sun and moon, and the motto “Free Men Own Guns.” When it was shown at the Downtown Gallery in Los Angeles, the critic Hunter Drohojowska, writing for Artforum magazine, said the piece “melds Hell’s Angels bike décor with Moral Majority folk art.”

In 1983, the hot-rod and biker cultures of Southern California collided with the sculptor's knowledge of mythology to yield “Pegasus.” “There were low riders everywhere. Lead sleds, we’d call them.” He found a 1963 Chevrolet Impala SS, “cherried it out and then got inside with this jackhammer, and just chopped open the top so it looked like it was exploding.”

Into the roof he dropped a real stuffed horse to which he had affixed wings. The piece mashed together the city’s car culture, the vintage taxis he'd seen in Tijuana, and the myth of Pegasus, the flying horse Bellerophon captured to ride to Mount Olympus, only to be thrown off when Zeus decided to punish him for his pride.

“Pegasus” has been reproduced more than 200 times, in books, magazines, and articles. The influential curator Walter Hopps included it in “The Automobile and Culture,” a show he'd organized for the 1984 Olympics in Los Angeles. “It was my second Olympics, this time as a sculptor,” Mr. Croak said with a smile.

The artist moved to Brooklyn in 1984 at the urging of friends, where, despite the popularity of "Pegasus," curators and galleries weren’t interested in the work from Los Angeles. It was then that he developed cast-dirt sculpture.

The new medium appealed to his “raggedy sense of the world. You have the obvious ‘dust to dust’ and you have this Sisyphean notion of incredible labor for no result. You go through this whole mold process like you’re going to do bronze, and you get dirt.”

"Man With Fish” took seven weeks to create, and Mr. Croak was exhausted. While walking through a store he noticed a row of dolls, and had a passing thought: How much easier it would be to make, say, a small baby out of dirt. When it was finished, though, thinking it wouldn’t be “publishable,” he stowed it under his workbench.

There it stayed until Marcia Tucker, then the director of the New Museum, paid a studio visit and admired it. Not long after, Barbara Bloemink, director of the Hudson River Museum, having heard about it from Tucker, came to the studio and bought it.

After that, “It got kind of easy to do dirt." In the mid-'90s Mr. Croak embarked on a new and eerily prophetic series, “New Skins for the Coming Monstrosities.” It was triggered by a series of news articles about particularly horrible crimes committed against children. “I decided to do a piece about how people were treating pets better than kids.”

“Cradle Camouflage,” the first piece in the 1995 series, is a latex dog whose side opens up to reveal a hollowed-out interior configured to conceal a child. “Arm Protector” is a latex limb that fits over a human arm and hand. That piece was a response to another pandemic, the flesh-eating disease prevalent in the mid-'90s that was associated in part with bacteria on A.T.M. keyboards.

Perhaps most prescient is “Lunchbox Vest.” When opened and flattened, the lunchbox is transformed into a shirt, whose center, the metal box, can serve as a protective vest. Typical of so much of Mr. Croak’s work, the piece melds conceptual clarity and insightfulness with an astute and imaginative use of materials. It predated Columbine by four years.

Goya’s “The Disasters of War” prints inspired the artist to produce a series of drawings on paper made with mud and glue. “The whole purpose of war is to put the other guy down under. And dirt is a filthy mess, so dirt seemed a good way to draw a war series.” The images depict scenes from all the wars since Goya. One is based on a photograph of a dead German soldier, taken by Mr. Croak’s grandfather during World War I.

Mr. Croak relocated from Chelsea to Sag Harbor in 2009. “I’ve lived in marginal neighborhoods all my life, and I had had enough of the city. Greenpoint was pretty rough and scrappy in the ‘80s, and Chelsea hadn’t yet gentrified when I moved there in the early ‘90s.”

Despite a resume jam-packed with gallery and museum exhibitions throughout the U.S. and abroad, a survey of work at MM Fine Art in Southampton is his first solo show on the East End. It will remain on view through Jan. 17.