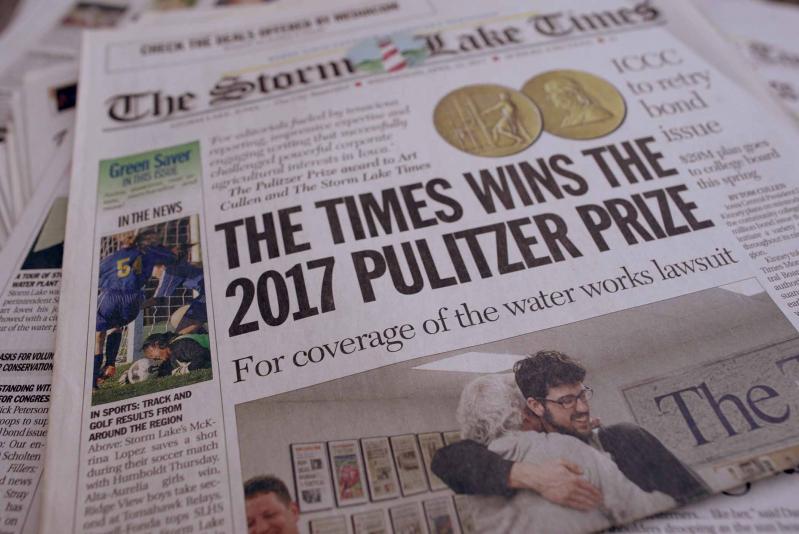 The Storm Lake Times's announcement of its Pulitzer Prize victory drew the attention of the filmmakers Jerry Risius and Beth Levison.
By Mark Segal

Jerry Risius traveled the world for 15 years as a director of photography for the Anthony Bourdain series “Parts Unknown” and “No Reservations,” but his first documentary feature as director brought him closer to home; specifically, to within two hours of Buffalo Center, the small northern Iowa farm town where he grew up.

“Storm Lake,” a documentary directed by Mr. Risius and Beth Levison, is an up-close portrait of The Storm Lake Times, a small-town, family-owned biweekly newspaper trying to survive while more and more readers look for their “news” on social media. The film will be shown Wednesday at Guild Hall as part of the Hamptons International Film Festival.

Historically a farming town, Storm Lake, with a population of approximately 12,000, is relatively small, and the newspaper is committed to focusing on local issues.

However, the issues that the town has faced over the past 40 years are anything but small. In 1982, I.B.P., now Tyson Fresh Meats, opened a hog slaughterhouse there, bringing production agriculture, or “big ag,” to the town.

During the film, Art talks about the devastating impact of "vertical integration," the combination in one company of stages of production normally operated by separate companies. Tyson, for example, raises hogs and produces pork products, putting pig farmers out of business.

At the same time, the factories employ several thousand Latinx immigrants, without whom, Art wrote in a 2018 New York Times Op-Ed piece, “Buena Vista County could fade away, losing population as 71 of Iowa’s 99 counties have over the last decade.”

These issues are elucidated over the course of the film, which ranges from coverage of the Heartland Forum, the first multi-candidate Democratic event of the 2020 cycle; the Iowa caucuses, the day-to-day operation of the paper, the fabric of the town, and, ultimately, Covid, which hit Tyson’s facilities so hard that the Storm Lake plant had to shut down at the same time as the paper’s struggle to survive without ad revenue put its future in doubt.

“I’m an Iowan,” said Mr. Risius during a recent interview. “I follow things Iowan.” But what drew Mr. Risius’s attention to the newspaper was the announcement in The New York Times that Art had won a 2017 Pulitzer Prize for editorial writing.

“So I looked up Art right away, I found the articles that won the prize, and I contacted him immediately, thinking this might be a great story. He was really doing work I thought was very admirable. He was trying very, very honorably to keep his community alive and together and well informed.”

Both Mr. Risius and Ms. Levison teach at the School of Visual Arts in Manhattan. After he met with Art in 2017, Mr. Risius told Ms. Levison he thought he had the subject for a film. Because she was working on several other movies at the time, she demurred, until a year later, when he told her about The Times's Op-Ed piece, which was titled “In My Iowa Town, We Need Immigrants.”

“There was so much tension and strife in America around immigrants at that moment,” said Ms. Levison, “and the essay reflected both complexity and humanity, and it made me cry.” Within a few months, “all the stars aligned.”

Filming began in March 2019 at the Heartland Forum, which took place at Buena Vista University in Storm Lake. Art was one of three journalists who posed questions to Julian Castro, John Delaney, Amy Klobuchar, Tim Ryan, and Ms. Warren.

Half of the newspaper’s staff are members of the Cullen family. Art’s brother John is the publisher, his son Tom the lead reporter, his wife, Dolores, the photographer and cultural reporter, and John’s wife, Mary, the food columnist.

The paper’s focus on the community is exemplified by several interviews with local residents. Dolores profiles both a Tyson factory worker from Mexico who makes it to the third round of a Spanish-language “American Idol,” and the Iowa Pork Producers’ “Pork Queen,” who explains that the industry is about growing pigs “fastly and efficiently.”

Art visits John Snyder, a second-generation farmer who'd had his worst corn crop in 25 years. Noting that the Cullens gave the filmmakers total access, Mr. Risius said, “I think that has a little to do with our fellow Iowa-ness. When Art went out to interview Big John, for example, it was something that I understood, having grown up on a farm.”

While they were denied access to the Tyson factory and a few local residents questioned what the film crew was doing, for the most part, Mr. Risius said, “people were very receptive.”

Although the newspaper has survived from year to year by a thread, Covid, and the disappearance of advertising, led the family to consider shutting it down for good.

“They lost thousands and thousands of dollars in those first couple of months,” said Mr. Risius. “The paper would have died during the summer of 2020 had it not been for the P.P.P. program and their Go Fund Me page.”

As for the film crew, once Covid hit they were unable to return to Storm Lake, but because Mr. Risius is a cinematographer and owns his own film equipment, he was able to shoot Zoom interviews with the Cullens.

“We want people to go on a ride with the Cullens and learn about Storm Lake and hear Art’s incredible voice,” said Ms. Levison. “But we really also want people to consider their own relationship to local news and whether they are supporting it.”

“We’re at a moment when our democracy is really threatened, and I think we believe that people’s access to factual and accurate information on the community level has a direct influence on a functioning democracy.”

In November, “Storm Lake” will have its national television premiere on PBS’s “Independent Lens” and its theatrical release in New York and Los Angeles. In the meantime, in addition to playing at festivals, it had a 12-day screening tour in the Midwest that began in Storm Lake. “It was a special night for everyone,” said Ms. Levison. “It was a real homecoming.”

The Hamptons International Film Festival opens this evening with a screening of the documentary “The First Wave” at Guild Hall, and will continue through Wednesday. The complete festival guide can be accessed on its website.