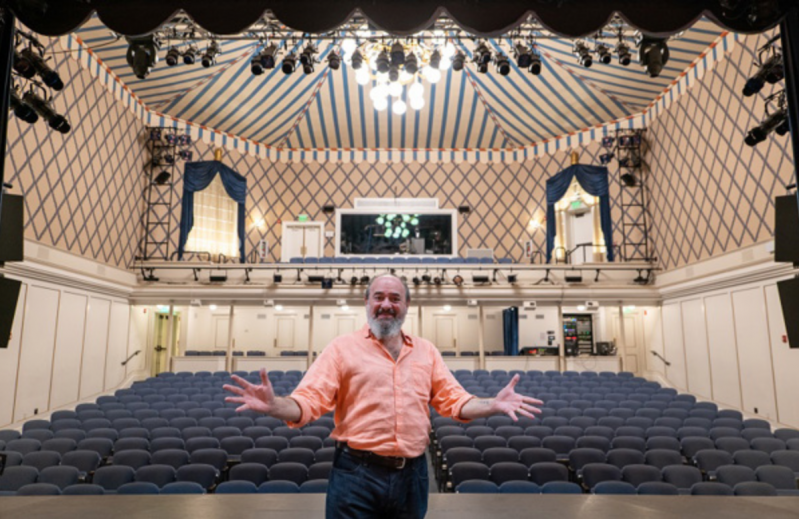 After more than 21 years at Guild Hall and leading its stage program through its 90th anniversary, Josh Gladstone, Guild Hall's artistic director, has announced his retirement from the institution at the end of 2021 to pursue other opportunities.

Guild Hall announced on Friday that it will begin a national search to find a new artistic director for the theater.

Mr. Gladstone has been with Guild Hall since 2000, after being invited by its then board chairman, Mickey Strauss, and executive director, Ruth Appelhof, to run its performing arts programs. He, his wife, Kate Mueth, and their infant son, August, relocated from Brooklyn to Springs and have been active in the community ever since.

On Friday, he said his plans were to continue working in theater, but on his own projects, keeping a hand in producing, directing, acting, and writing. "I'd like to think I've got another chapter or two in me in terms of work," he said. "I'm at a different place now at this age than I was when I was a 32-year-old man with a young family."

Although he is considering a number of projects in New York City, he and Ms. Mueth plan on keeping Springs as their home base. Their son, who has recently graduated from Emerson College in Boston, plans to pursue a screenwriting career after being accepted into a writers program in Los Angeles.

Mr. Gladstone had spent his childhood visiting Amagansett in the summer before starting the Hamptons Shakespeare Festival with his cousin David M. Brandenburg in 1996. He brought productions of "Hamlet," "Macbeth," "Julius Caesar," and "Romeo and Juliet" to Guild Hall's theater in addition to a run of successful and beloved productions of "Equus," "Moby Dick Rehearsed," and "All My Sons," along with numerous star-studded staged readings.

Some of the other programs he started at Guild Hall include the experimental JDT Lab for theater, the Guitar Masters mini-festival; Questlove’s "Conversations on Creativity," and the annual "Summer Spectaculars" that used to mark the start of the season, with performances by the Beach Boys, Martin Short, Mandy Patinkin, Patti Lupone, Jay Leno, Audra McDonald, Liza Minelli, and Steve Martin. He also brought the popular Met: Live in HD program to the theater.