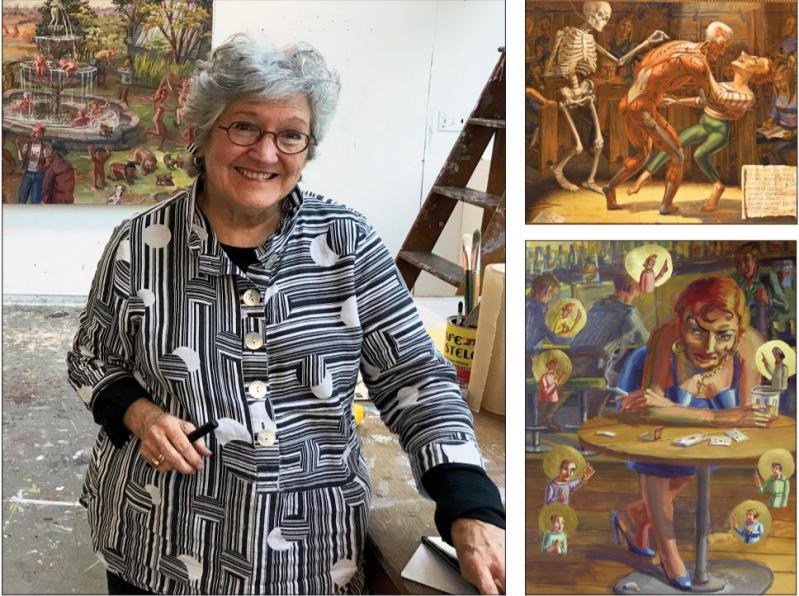 M. Louise Stanley in the Elaine de Kooning studio with her painting in progress "Fountain of Youth." Top right is "Anatomy Lesson," and below that "Bad Girl," with medallions inspired by works at the Metropolitan Museum of Art.
Mark Segal
By Mark Segal

M. Louise Stanley, a fixture on the California art scene for more than 50 years, brought her distinctive sensibility to East Hampton in August for a 10-week residency at the Elaine de Kooning House, and a group exhibition of satirical paintings and imagined narrative scenes at the Ranch in Montauk.

During a conversation in the de Kooning studio, the artist recalled several “aha!" moments from her career. While in graduate school at the California College of Arts and Crafts in Oakland in the late 1960s, she and three other female students would repair after class with their sketchbooks to a huge graveyard.

One of those “bad” paintings is “The Mystic Muse and the Bums Who Sleep in the Golf Course Behind the Oakland Cemetery,” a watercolor from 1970. The muse, a distorted, cartoonish nude figure, seems to emerge from a pool of water in a bright yellow flame or halo while five macabre, bizarrely dressed figures surround her.

“I think I have enough of a sense of composition that if you took the people and the figures out and looked at them abstractly, there’s always a movement.” She did a second version eight years later with the same figures, but with cast shadows and more rendering. “I realized I got more bang for my buck if I took the caricatures and put them in real space.”

Juxtaposition of seemingly incompatible elements is central to Ms. Stanley’s work. Thematically, she combines the mythological with the quotidian, often drawing upon iconic images from art history and in some cases desecrating them.

One especially striking instance of her riffing on art-historical sources is the 2012 painting “Melencolia (After Durer).” The central subject of Durer’s 1514 engraving “Melencolia I” is a brooding, seated, winged woman in a room crowded with carpentry tools, a putto, a dog, and a ladder, among other objects.

Ms. Stanley is faithful to Durer except for one intrusion: the artist herself, brandishing a jester’s mask, presumably trying to elicit a smile from the gloomy figure. The floor around the artist is littered with a palette, brushes, paint tubes, even a concertina.

While Ms. Stanley appears in various guises in her paintings, the particular self-portrait from “Melencolia” is a recurring one. She is always dressed in capri pants, a striped jersey, and high heels. Its first iteration was in the 1981 watercolor “Artist Burying a Reject in the Dead of Night,” where she is digging a “grave” for the artwork on the ground.

She said that almost every painting with that figure, which has been referred to as her alter ego, is about painting, or the act of painting. In “Judgement of Paris,” the alter ego, naked except for the high heels, is one of three unclothed women holding canvases for the inspection of a pipe-smoking, fully dressed man, who may be a dealer or curator. In another context, Ms. Stanley said, “I like doing grand paintings about dumb things.”

Ms. Stanley and her family moved from West Virginia to Southern California when she was young. The two biggest influences on her were her father, who took her landscape-painting as a child and introduced her to the work of the American Regionalist painters, and the Huntington Library, Art Museum, and Botanical Gardens in San Marino.

Of those painters, she has said, “Though I was embarrassed by their authenticity and bare-faced sincerity as a child, I now strive for those elements in my paintings.” At the Huntington, she spent days in the manuscript collection, which includes a Gutenberg Bible and Books of Hours.

She earned a B.A. from La Verne College in La Verne, Calif., a Brethren school where “I was an oddball. I was the first person on the campus in 1962 to get a motor scooter so I could go to Scripps College” for life-drawing classes. When she hung the drawings on her dormitory room walls, another student considered them indecent and reported her to the dean.

Her parents moved to the Bay Area while she was in college. After graduation she began taking classes as a transfer student at the California College of Arts and Crafts. At first, she said, “My idea of painting was landscapes, still lifes, and nudes.” She eventually earned both a B.F.A. and an M.F.A. there.

Politics, humor, and art history have figured prominently in Ms. Stanley's work for five decades. “Homage to Duchamp” features a nearly naked woman in a bridal veil being stripped bare by nine miniature Marcel Duchamp figures. One recurrent subject is “Bad Bankers,” in which a berobed Justice lifts her blindfold while spanking a bare-assed (otherwise fully suited) banker as a judge and jury look on impassively.

“Forbidden Fruit,” which opened at the Ranch in Montauk in September, featured paintings by Ms. Stanley, Peter Saul, and Robert Williams. The gallery said the exhibition “hinges on perverse renditions of sacred subjects -- undoing figures and traditions heralded by modernist art history and consumerist culture alike.”

One of her works in that show, “Snake Oil,” depicts a naked Eve, locked out of the Garden, wearing a tourist visor and surrounded by a pile of apples, three vials of snake oil, and a discarded Budweiser can.

Most of Ms. Stanley's shows have been held in museums and galleries on the West Coast, but she had a solo show at P.S.1 in Long Island City in 1979 and has also exhibited at Fashion Moda, a ground-breaking, cross-cultural exhibition space in the South Bronx. Last spring, “M. Louise Stanley: No Regrets,” a career retrospective, was held at the Marin Museum of Contemporary Art in Novato, Calif.

While most of her early work was in watercolor, in 1980 “the paper went bad because there was a plague on the rabbit population in France, and they used rabbit-skin glue to size the paper.” Encouraged by a grant, she moved to oils, and, she said, didn’t leave her studio for a year. As a result, she became allergic to oil paints and “had to reinvent myself and work in acrylics.”

The allergy also forced the artist to quit university teaching because she couldn’t tolerate being in the art studios. Since then she has taught classes in her own studio.

In 1994, she began leading students and friends on “Art Lovers Tours” through Europe. Sketchbooks became integral to her travels, a practice that drew in part upon her familiarity with illustrated medieval manuscripts. The first page of each journal features a self-portrait, and the journals are filled with studies of other artists’ work.

“I like the process of copying something,” Ms. Stanley said. “Standing in front of a painting and tracing the route the artist made is the only way you can have a conversation with a dead artist.” She is currently working on a sketchbook project with the Fine Arts Museums of San Francisco.

Of the de Kooning house, she said, “When I saw the space, I just thought, I’m in heaven.” She paints for eight to 10 hours every day, after which she makes notes in her sketchbook about what she should fix in the morning.

One of the works in progress is “Danae and the Shower of Gold,” a theme depicted by Orazio Gentileschi, Titian, Correggio, and many others, which shows Zeus visiting Danae in a shower of gold. In Ms. Stanley’s version, Danae lies naked on a bed, legs spread, grimacing, while a stream of gold emerges from Cupid’s penis.

Another work in the studio is a version of “Fountain of Youth.” Putti play in a classical fountain, while a line of elderly people on walkers approach. A pile of discarded walkers lies to one side -- a variation on the stands of crutches at Lourdes.

The de Kooning house itself finds its way into “Fountain of Youth,” its iconic slanted window wall visible behind a stand of trees.