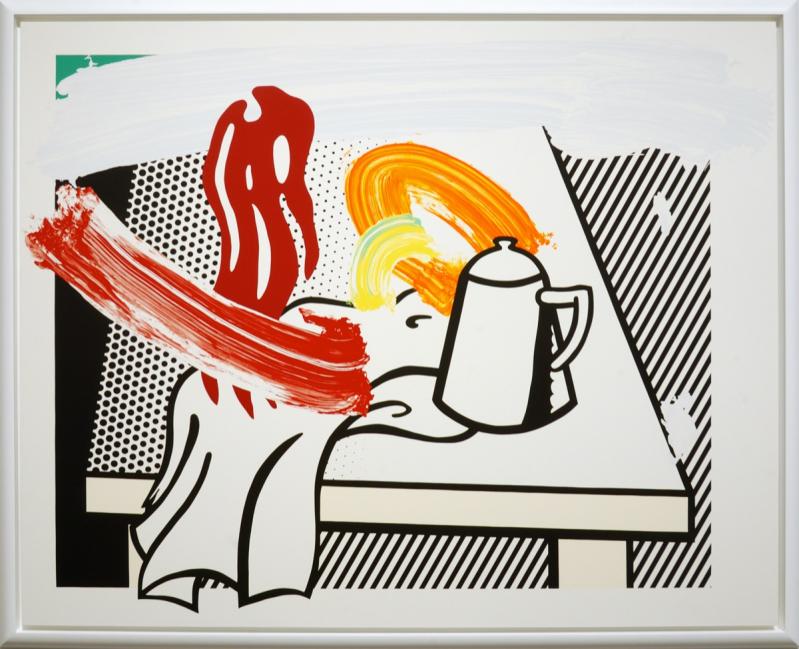 Roy Lichtenstein's "Brushstroke Still Life With Coffee Pot," from 1997, will be on view at Guild Hall.
By Mark Segal

Guild Hall will ice its 90th birthday cake with two exhibitions that reflect its commitment to both the history of the East End’s art community and its contemporary vitality. “90 Years: Selections From the Permanent Collection” and “Jeff Muhs: The Uncanny Valley” will launch Saturday, with an open house set for 3 to 5 p.m.

“90 Years” consists of 90 works selected by Christina Mossaides Strassfield, the museum’s director and chief curator, from its holdings of some 2,500 artworks. “I wanted to give people an understanding of our history by trying to represent the breadth of the collection in two galleries,” she said during a tour of the installation in progress. “I decided to go against my usual spare style and instead do salon style.”

The first half of the exhibition begins with the oldest pieces, among them a Thomas Moran painting from 1878, and proceeds more or less chronologically. There are interesting cross-references, such as two paintings by George Bellows from 1899 and a 1918 drypoint by Peggy Bacon of a model in Bellows’s class.

Childe Hassam is represented by his iconic “Little Old Cottage, Egypt Lane, East Hampton” from 1917, as well as by Arnold Genthe’s 1935 portrait of Hassam. The New York School is ably represented as are Pop works by Roy Lichtenstein, Larry Rivers, and Andy Warhol.

The second half of the show dispenses with chronology, preferring instead to “mix it up,” said Ms. Strassfield, with the aim of drawing connections based on affinity. It includes a monumental mixed-media piece by Frank Stella from 1971, prints by Jasper Johns and Robert Rauschenberg, a Robert Wilson chair, and recent works by Barbara Kruger, Mary Heilmann, and Frank Wimberley, to name just a few.

Visitors can expect to be surprised by the scope of the collection, Ms. Strassfield said. “Because we don’t have a permanent collection gallery, we don’t get a chance to show our holdings very often. I’m really thrilled I was able to get as much as I could into the exhibition. I felt that I had a big responsibility to showcase quality work and to make it as equitable as it could be, given the limitations I had.”

'The Uncanny Valley'
Originally set for last year until it was postponed by the pandemic, “Jeff Muhs: The Uncanny Valley” includes a selection of the artist’s unique concrete sculptures, one of which “Callipyge,” won top honors at the museum’s 2018 Artists Members Exhibition. Paintings from several of his recent series will also be on view.

“I think his work is so interesting, creating work with cement with a technique that is totally his invention,” said Ms. Strassfield, who organized the show.

“I have developed new methods for forming concrete,” he has said, “which embrace the insubordinate qualities of the medium.” The resulting pieces are a physical record of his efforts to control the forces inherent to the medium and to “lay the materials and process bare before the viewer.”

Both exhibitions will be on view through Jan. 2. Mr. Muhs will lead a tour of “The Uncanny Valley” on Friday, Nov. 5, at 3 p.m.