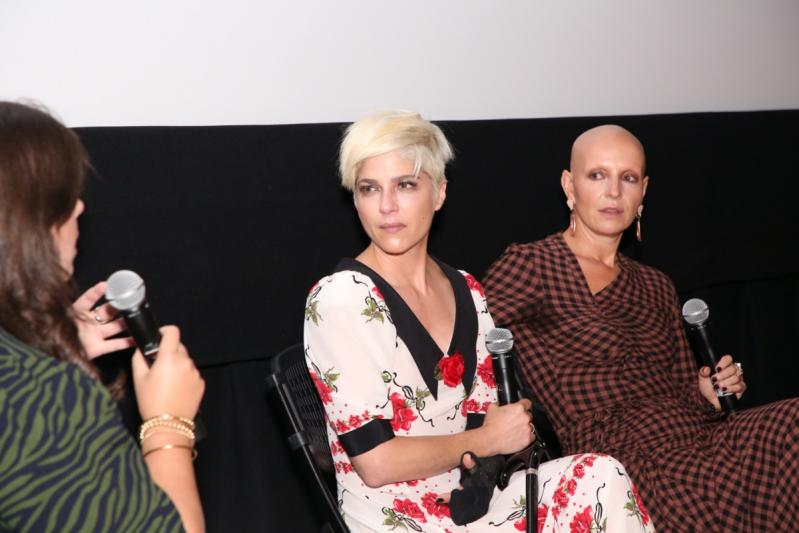 "Introducing, Selma Blair" was released in theaters in New York City and Los Angeles last week, but had its East Coast premiere on Oct. 9 at the Hamptons International Film Festival. It begins streaming Thursday on Discovery Plus.

The documentary marks the first feature-length film by Rachel Fleit, a part-time resident of Springs. Its subject is the actress of the film's title, known for supporting roles in several hit movies, and her life primarily since her diagnosis of multiple sclerosis in 2018.

The director and subject were on hand after the screening to talk about the film and received the New York Women in Film and Television excellence in documentary filmmaking award, which was a surprise to them both.

The film is an unflinching look at illness and the way it can upend lives and relationships. Ms. Blair displays a profound humanity and a distinct sense of humor even while receiving medicine and treatment that can often dehumanize patients and rob them of their voice.

The movie's brief background and filmography of her early and later career brings us up to date on a mother trying to raise her son as normally as possible while illness debilitates her.

"Selma and I had our first FaceTime call in Amagansett Square," Ms. Fleit said, and Ms. Blair wasted no time in calling out her baldness, which comes from alopecia. "It was immediately on," Ms. Fleit recalled. "We had a deep, true auto-immune connection, and the rest is history."

"With Selma, nothing was off-limits," she said. "We got deep and real very quickly. . . . I had an extremely generous subject."

For her part, Ms. Blair told the audience that she really trusted Ms. Fleit and thought she was a great director. Still having difficulty speaking in situations when she is overstimulated, she was overcome with emotion.

"I think you saw Selma really embrace herself in this film," Ms. Fleit said. "In making it, I felt like she gave me permission to embrace myself on a whole new level." She said the thought came to her in editing that "if Selma is going to let us show her in this way, then I think we've really created something extraordinary. Whether or not you're chronically ill or have a disability . . . no matter what, you could see yourself in her experience."

She said she hopes that many people see the film, see themselves, and to find relief in that. "It's hard to be alive and be a human being, and Selma is so inspiring."

A mother of a son with M.S. thanked Ms. Blair for agreeing to be the subject of the movie, as did others in the audience. She replied that despite the sometimes agonizing procedures documented, the film itself was an easy process. "It was a joy."

"Dispatch" in Theaters
Another film previewed at HIFF, Wes Anderson's "The French Dispatch," will be shown in select theaters beginning Friday and then in wide release the following week. It was introduced by Bob Balaban at the closing night screening. Mr. Balaban, who lives in Bridgehampton, is a board member of HamptonsFilm and part of the film's very large ensemble cast, which includes Liev Schreiber, another South Fork denizen, as an intellectual television interviewer in the mold of a Dick Cavett or Tom Snyder.