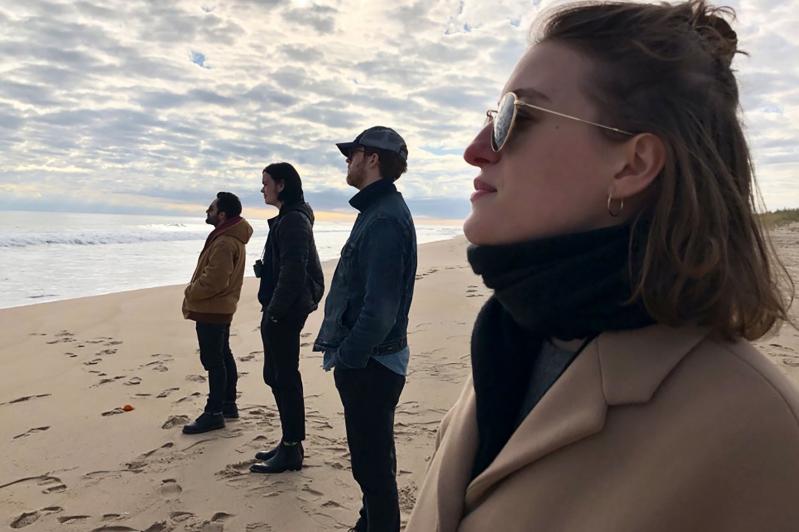 In the Mohegan Pequot language, the word “sawanakee” translates to “salt water people,” according to Jake Rosenberg, a playwright, folklorist, and co-founder of American Lore Theater. “That’s the word they would use to describe European people who came from the sea.”

“Salt Water People” is also the title of a play by Mr. Rosenberg about Chris King, a fictional bayman from Springs, and a mythical sea creature called a Swonacker, a linguistic hybrid of "Bonacker" and "sawanakee." While it has been performed as a play over the last two years, since the pandemic it has only been available on Spotify as an hourlong audio play -- one well worth seeking out.

The story focuses on the King family at two key points in their lives, in 1991 and at the time of Superstorm Sandy in 2012. It is informed in part by Peter Matthiessen’s book “Men’s Lives.”

The play opens the morning after Sandy, when Chris’s son Dan and Dan’s wife, Coral, are searching for Chris, who took his boat out during the storm and hasn’t yet returned. The action then shifts to 1991, when Chris, a 12th-generation bayman, is struggling to survive in the face of what he sees as overregulation by the New York State Department of Environmental Conservation.

Chris’s anger moves from the city people (“an invading species”), to then-Governor Mario Cuomo, to his son Dan’s imminent departure for Stony Brook University, where he plans to study environmental science. Chris announces, to the surprise of his wife, Alexa (a nod to Billy Joel’s anthem), that he has just mortgaged the family house to buy a new boat so he can “fish the canyon” and “save my family and put my kid through school.”

As tensions spiral out of control, Alexa tells him it’s time for him to leave, to “go out on the boat and get your head straight,” and he does, with a reluctant Dan, who tries to explain the science behind the D.E.C.’s regulations. Chris counters with “It’s not the fish what’s dyin’ off, it’s the industry what’s dyin’ off, the regulation is killin’ the industry.”

Without giving too much away, the Swonacker is a sea creature with human characteristics that, when pulled out of the water by Chris and Dan, turns the story in dramatic and unexpected directions.

If “Salt Water People” sounds like the work of a Springs native, in fact Mr. Rosenberg had never been there until becoming drawn to the story. The attraction was not a particular interest in the plight of fishermen but rather a fascination with linguistics and different regional accents.

“Dialect has always been rooted in my work on folklore,” he said. Several years ago, before “Salt Water People,” he was working on a project about the Gullah Geechee dialect found in South Carolina when he came upon a Facebook advertisement for the American Folklore Society.

He attended the society’s annual meeting in Minneapolis, which led to a job as a folklorist at City Lore in Manhattan. While doing research there, he came across a reference to the Bonac dialect in a textbook footnote. “The accent definitely motivated the research,” he said. He is particularly fascinated by accents that have survived from an older and different culture, “a survival of the past in the present.”

He read “Men’s Lives” and, in part through introductions from the East Hampton Historical Society and the East Hampton Library, he has been able to talk to fishermen and their families, an important component of his fieldwork.

While all the voices heard in the play belong to actors, it’s not surprising that the accents are authentic. The five cast members have done fieldwork, too, making frequent visits to East Hampton along with Mr. Rosenberg, “having lunch with a fisherman or a bayman or even a relative who is just happy to talk with us. The actors know some of these fishermen," among them Brad Loewen and Arnold Leo, members of the East Hampton Fisheries Advisory Committee, "almost as well as I do.”

Some of the sound effects, including the rainfall, the ocean, and the wind, were gathered from the historical society. Indeed, the play was to be presented at the society and other venues on Long Island during the spring, complete with artifacts such as spears and nets. “We came up with using the sounds of the place as a way to recreate it in a digital format.”

“Salt Water People” is a production of American Lore Theater, whose members, including Mr. Rosenberg, create, seek out, and present programming in collaboration with a broad range of American communities.

The audio version was written, researched, and directed by Mr. Rosenberg and stars Trevor Jones, who also did the sound design; Thomas Hedlund, Jac Bernhard, Alex Lin Holden, and Emma Welch. Daniel Foster, Juliana Sass, and Allison Boenig, who are members of American Lore Theater, appeared in the live performance of the play.

This article was updated to correct the headline. In addition, Emma Welch's name was incorrectly spelled in the print version and has now been corrected.