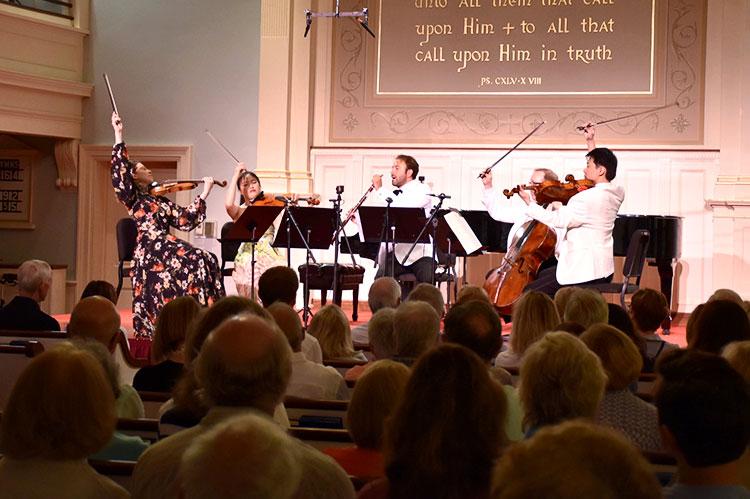 This year the Bridgehampton Chamber Music Festival will showcase streamed recordings of previous concerts, which will be updated weekly on Sundays beginning this weekend.
Michael Lawrence
By Jennifer Landes

This weekend, the Bridgehampton Chamber Music Festival normally would have begun its annual summer concert series, as it has for 36 years. But aside from the heat, this summer is anything but normal. Fans of the series, however, will be able to hear five hourlong performances in the comfort and safety of their home or garden beginning Sunday.

After her announcement in May that this year's festival would not take place as planned, Marya Martin, its artistic director, continued to think about ways to bring music to its fans and aid to its musicians.

She said last week that they decided quickly to move into streamed concerts, "audio and video from prior years that we curated into a program." She will "continue to introduce the program, as I always do, in the [Bridgehampton Presbyterian] church." Each concert will have a Zoom interview with the musicians or the composer. "It should be a nice little evening."

These free programs can be streamed on the festival's YouTube channel for one week from Sunday to Sunday, when the next program drops. "You can have some drinks, sit outside with a portable speaker, and have a concert," she said. There is a button to make a reservation on the festival's website. "That is so we know how many people are listening."

Although many arts organizations are using an online benefit model this year, Ms. Martin said her group is trying something different. "As with every other arts organization, we have lost our spring and entire summer. Ticket sales for those two series are nonexistent."

And even when it's not producing its regular programs, the festival still has expenses, including office space and a director's salary. In addition, "we plan for the festival a year ahead of time. . . . We signed contracts with the musicians a year ago."

With many different concert series and festivals throughout the summer in regular years, musicians must be locked in early in the process. Because she chooses the musicians based on the program, that also has to be determined a year ahead of time.

Many organizations have not been able to honor their contracts. "These guys have not been playing concerts since March." Ms. Martin said the closures of concert venues are likely to go into next year. "I know Lincoln Center is closed until January, and I hear it might be continuing longer after that." Musicians are particularly vulnerable in these circumstances, and the festival has decided to honor their contracts. "We've sent them 50 percent, and now are trying to raise the rest."

With no money from ticket sales, there was no money to invest in a virtual benefit or concert. "For a small organization like us, they're actually quite expensive. You have to have a crew filming, good Wi-Fi, which out here is not spectacular, and then of course, musicians have to be together." She said at least one musician she has worked with for years said she was not comfortable playing with other people right now.

"We have sent out a virtual invitation to a 'No Show' benefit," she said. "We say in the invitation, 'You're cordially uninvited to come to our benefit.' And the response we've gotten has been quite wonderful." Regular supporters and subscribers have said they are relieved that the festival is not taking on the expense. Others can donate by going to the festival's website.

Ms. Martin said she hopes that some concerts in the fall might be arranged. Even outdoors, the programs would need a tent to be heard. A tent requires a permit and bathrooms, Covid-19-level cleaning of those bathrooms, and more. It's really still impossible to make plans, she added, since at any time we could go back a phase or two.

There are also the less obvious risks. As a flutist herself, Ms. Martin noted that woodwind instruments push the air blown into them out very far. She mentioned an amateur choir in the Midwest that had an event in early March. With half of the members showing up to perform, she said, 90 percent of them became sick and five people died. "It's those huge breaths in and out." She added that classical music audiences are older and most at risk.

Fans of the series will be happy to know that many of those who were on the summer schedule will appear in these prior performances. This week's concert is "All About Mozart." Coming up on Aug. 2 is “Dvorak/Moravec — A New Country." On Aug. 9, "Shifting Winds" spotlights wind instruments with a commissioned work by Kenji Bunch. “Travel the World at Home” on Aug. 16 features evocations of France, India, and New Zealand through the work of three composers and Haydn's "Surprise Symphony." The series finale on Aug. 23 is "Boccherini & Mendelssohn: Virtuosity," with a flute quintet and a piano quartet, respectively.
More information and program notes are available on the festival's website.