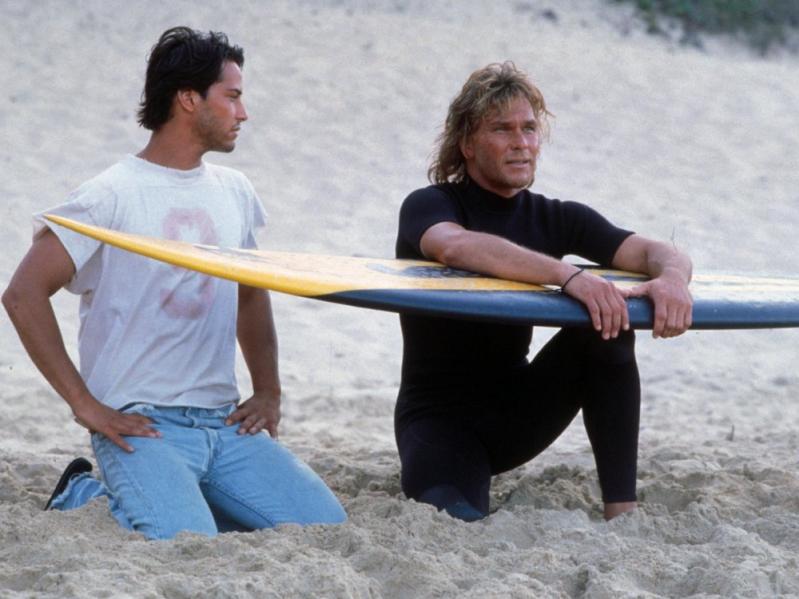 Keanu Reeves and Patrick Swayse starred in "Point Break," one of three films to be presented drive-in style at Havens Beach by the Sag Harbor Cinema.
By Mark Segal

Surfing, bank robbery, and skydiving will be among the thrills when the Sag Harbor Cinema drive-in movie series resumed at Havens Beach on Sunday night with "Point Break," the first of three screenings. Directed by Kathryn Bigelow, whose "The Hurt Locker" won Oscars for best picture and best director, the action-crime drama stars Keanu Reeves as a young F.B.I. agent assigned to infiltrate a group of surfers he believes to be an infamous gang of bank robbers who disguise themselves with masks of dead presidents. Patrick Swayze plays the surfers' charismatic leader.

Subsequent screenings will feature "Moonrise Kingdom" (July 12) and "Selena" (July 19). Directed by Wes Anderson, "Moonrise Kingdom" has a star-filled cast, including Bill Murray, Bruce Willis, Edward Norton, Frances McDormand, Tilda Swinton, and Harvey Keitel, but its focus is on a romance between two preteens who set up camp on a remote beach after becoming pen pals.

Jennifer Lopez's career was launched by her performance as the Tejano pop star Selena Quintanilla-Perez in Gregory Nava's 1997 music biopic. Encouraged by her father, who had been rejected by the mostly white music industry, Selena rose from young prodigy to become a world star, as did Ms. Lopez.

Tickets are $40 per vehicle and available only on the cinema's website. The park opens at 9, and the screenings begin at approximately 9:30.

Three films have been added to the cinema's website, where they are available for 24/7 viewing. "Tommaso," directed by Abel Ferrara, is the story of an American artist (Willem Dafoe) living in Rome with his young wife and their child during a period of marital turmoil.