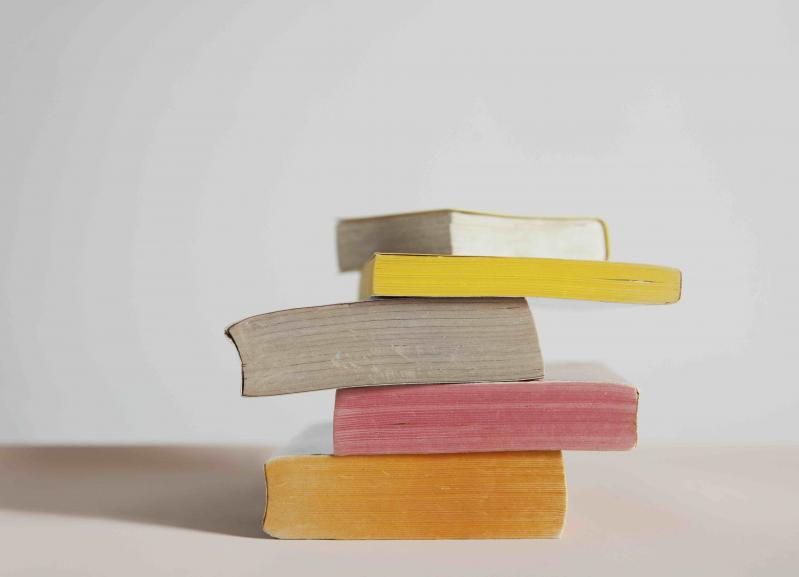 "Return to Summer Reading," a show of new Mary Ellen Bartley photographs at the Drawing Room gallery in East Hampton, reveals an artist who is a master of reinvention derived from ever so slightly shifting her focus on a single subject.

A photographer of books for many years now, her approach has changed over time from pictures of old books bound in blue covers and imbued with a lush and painterly finish, monochromatic and cerebral examinations of paperback books that highlighted their formal connections, artists' books cracked open just enough to reveal a voyeuristic glance within, and an unusually colorful and emotive series inspired by the decaying books once on the shelves of Grey Gardens.

For her current series, she has maintained the element of color from Grey Gardens, but has synthesized it into a formal approach familiar from her earlier paperback series. The installation makes the best of the push-pull energy of the faded colors on the page edges of mass-market paperbacks from a previous century.

In an essay for the gallery's online catalog, the artist recalls, "It was a cold, wet February night. The faded chartreuse, taxi yellow, and lipstick red page-edges called to me from the damp 48¢ book bins outside the Strand bookstore on Broadway."

Not only are the books a remnant of an increasingly distant past, the bins have disappeared too. It's not even immediately clear where she and the gallery found the symbol for cents in that passage, as it disappeared from computer keyboards years ago. While the books and bins have vanished, she has continued to collect those books where she can find them, amassing hundreds to draw upon in her colorful stacked compositions.

"The worn textures and tightly packed page ends held what is known as pulp, referencing both narrative content and physical material," the essay continues. She found that the colors and textures in her photographs, printed on rag paper, "enhanced and underscored the book's materiality."

That is more than apparent in these photos, which she completed in her attic studio in Wainscott after returning from a residency in Bologna, Italy, at Giorgio Morandi's library and studio as the coronavirus hit. Ms. Bartley's older series of paperback photographs were particularly reflective of Morandi's own still-life explorations, and she has stated that she thinks of her compositions of books as still lifes.

These more colorful works seem to echo the Minimalists in their spare planar forms but often exuberant use of the faded color. Stacked in their most vivid conglomeration, they can seem like macarons, commercially baked petits fours, or a stack of paint strips or crayons. One reason the crayons don't come immediately to mind is that her compositions in this room -- and perhaps in general -- are always stacked, one book on top of the other, rather than standing up alongside the other.

The implied weight feels more dynamic and more powerful. Gravity plays a role in these works. In one composition, she has rotated some of the books in the stack so that they are cantilevered and precarious in their positioning. It's a friendly reminder of what it is that is being viewed, but also introduces some Eastern-inspired imbalance or an anti-classicizing impulse.

Sometimes the compositions can look like bricks and mortar or a thick ice cream sandwich. One composition keeps the mostly staid and precise stacking, but musses it up just a bit, which breaks up the rigid formality slightly. The books breathe a bit and we do too.

The show will be on view through July 12. The gallery is now open Friday to Monday from 11 a.m. to 5 p.m. and accessible by appointment on Tuesday through Thursday.