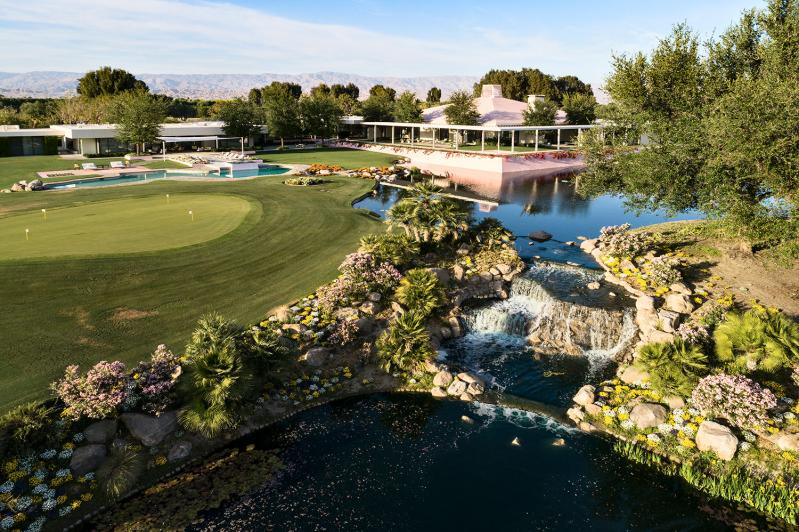 The Southampton Arts Center’s Architectural and Design Tour will transport participants via Zoom to Palm Springs for a tour of three iconic properties and a visual presentation of the city’s architectural history by Lance O’Donnell, a local architect.
By Mark Segal

The daily temperature in Palm Springs has been approaching 120 degrees of late, but subscribers to the Southampton Arts Center's 2020 Architecture and Design Tour can beat the heat with a virtual visit via Zoom tomorrow at 5 p.m.

Lance O'Donnell, principal of o2 Architecture, will kick off the tour with a visual presentation about the social, design, and architectural history of the iconic desert city. The talk will be followed by virtual tours of three properties, including Sunnylands, the former estate of Walter and Leonore Annenberg that was known as the "Camp David of the West," Southridge, where Mr. O'Donnell will be joined by the director of the Palm Springs Art Museum, and Ridge Vista, which was designed by o2 Architects.

Tickets start at $75 and can be purchased on the arts center's website.

Hamptons Film Drive-In, in partnership with the Hayground School, will show Max Barbakow's comedy "Palm Springs" tomorrow evening. The plot involves a chance encounter at a Palm Springs wedding that becomes more than just a romantic comedy premise, as both characters find themselves experiencing the same events over and over again.

Andy Samberg and Cristin Milioti star. Mr. Samberg's Lonely Island comedy group was involved in the production, but, NPR noted in its review, the film offers "a little bit of a different shading of his persona." The filmmaker won a student award at the Hamptons International Film Festival some years ago.

All films cost $50 per car and are screened at 8 p.m. at the Hayground School in Bridgehampton. Tickets must be purchased prior to the screening on the Hamptons Film website. Further information will be provided upon registration.

Given the hunger for live entertainment generated by four months without it, it's no surprise that tomorrow's 6 p.m. concert at the Parrish Art Museum in Water Mill by Hector Martignon and the Foreign Affair has sold out. However, fans of Mr. Martignon's fusion of traditional Latin American songs, European classical music, and Afro-Cuban jazz can register on the museum's website to view the concert online without charge.

The Southampton Arts Center will take advantage of its spacious west lawn to join the alfresco film frenzy with two series. Friday Features, presented with the Hamptons International Film Festival, will launch tomorrow with Rob Reiner's 1987 fantasy-adventure "The Princess Bride." Subsequent titles will include "Silence of the Lambs," "BlacKkKlansman," and "E.T."

Sunday Docs will open this weekend with Damon Gameau's "2040: The Regeneration," which explores the best currently available solutions to climate change and environmental degradation. "Killer Bees" and "Free Solo" are among the future offerings.

All outdoor films are free and will begin at sunset. Guests can take chairs, blankets, and picnics, and the Plaza Cafe on Wheels food truck will be on site. Safety protocols will be observed.

Trees, Wreaths for Sale in Amagansett
Holiday Cheer Is Coming to Sag Harbor
Even More Thanksgiving Options From the Pike and Old Stove
END_OF_DOCUMENT_TOKEN_TO_BE_REPLACED