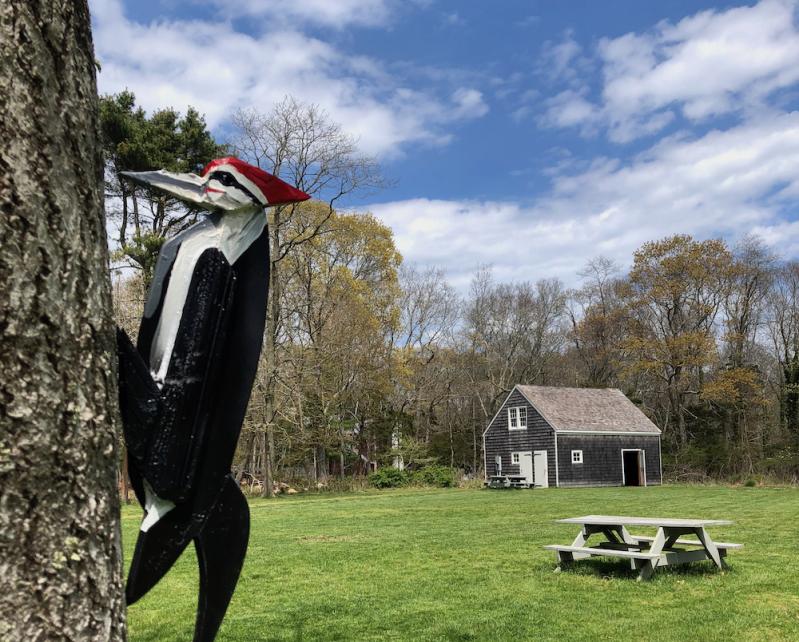 For the past couple of years, a dedicated group of cognoscenti has gathered in Springs not far from Three Mile Harbor to partake of the cultural offerings at the Arts Center at Duck Creek.

The 6.7-acre property, which was owned by the New York School artist John Little and was once part of a 130-acre farm, was purchased by East Hampton Town in 2004. The barn that served as Little’s studio has been restored and is now an exhibition space surrounded by woods and a rolling lawn, the site of outdoor sculptures, jazz concerts, lectures, and other events.

Jess Frost, the arts center’s executive director, has devised programs and exhibitions that directly relate to the present Springs artist community and its history as an art colony going back decades. Given this precedent, the site has become inextricably linked to its programs. That is a challenge in a socially distanced time.

During the lockdown, she has encouraged patrons to visit the grounds responsibly and contribute to the improvised art projects on site: a found-object mandala and homespun bird sculptures installed in trees and around the property.

Speaking by phone last Thursday, she said of the summer season, “Up until today, I wasn’t sure we could do anything. I wasn’t sure we would be able to have art exhibitions or jazz concerts or any of that.”

At that point, the town had just determined that she could install exhibitions in the barn and have everything recorded and posted online. She is working with a company that will make a 3-D virtual reality recording of the first show of the season in the barn that can be shared online. “If it proves useful, I hope to continue using this as a way to reach audiences for the rest of the Covid season.”

With new state rules allowing for gatherings of 10 people or fewer, “we hope to be open by June 13 for small groups, which is pretty standard operations for Duck Creek. We’re low-key even without a pandemic.” An exhibition of work by Mason Saltarrelli and Bill Saylor will be installed and posted on the website on that date.

The first exhibition Ms. Frost had planned for the season had to be canceled. It had been scheduled to be installed in April for a May opening. “We were in serious lockdown then,” she said. “You didn’t really know what this virus was going to do.”

When Mr. Saltarelli saw the space initially, he told her, “I just want photos of my work in here. I don’t care if I have a show.” Until last week, she thought that might be all she could offer him. “I know Mason and Bill have had shows that have been postponed recently.” She gave them an out “with no hard feelings, but they were really enthusiastic about doing it, no matter what form it took.”

For concerts, which have been online only during this period, “I have a strategy — I’m sure everyone else does too.” She ordered 20 Indian blankets that she will soak in tick repellent. “They’ll be six feet away, and quarantining households can reserve a blanket. My hope is getting to that point. We could do a drive-in, start parking cars on the lawn of Duck Creek, but that’s not where I want to go with it.”

She is “cautiously optimistic” about concerts returning to the lawn. “I have multi-tiered strategies for keeping things safe as the restrictions lift in phases,” but she said she won’t “make a move without the town’s permission.”

During the lockdown period, she and Peter Watrous, who organizes the jazz programs, created the Covid Commissions concert series, which is posted on Duck Creek’s website.

“The first and foremost thing we realized we needed to do was to pay musicians,” Mr. Watrous said. “The Covid crisis has been extraordinarily hard on musicians, who work in a deeply social world, at clubs, concerts, and with other musicians. That world is now totally gone.”

He said the urgency took precedence over specific program goals. Yet “the fertility in the jazz scene in New York now is astounding, and matched by a technical proficiency that’s new.” They wanted to “support that world, hoping that after Covid, it will still exist.” At the same time, they recognized that the musical talent on the East End “is extraordinary and at an international level.”

“Each of the musicians, regardless of where they come from, are really exceptional, and the least we could do is help them survive,” Mr. Watrous said. Placing them on the internet gave these mostly solo performances exposure far exceeding a traditional concert in a single venue.

Unlike many arts organizations, Duck Creek does not rely on ticket sales for its support. The town maintains the property, and Ms. Frost raises money for the programs, with major support from the Willem de Kooning Foundation. She continues to channel the program money to the creative people who need it. The birds project in the trees started as a fund drive for the Springs Food Pantry. The arts center donates $10 for every bird that goes up.

What happens next is hard to know, but Ms. Frost is ready for whatever the summer brings.

For this season’s exhibitions, Ms. Frost cannot picture a return of receptions. “I just don’t think a gathering of 100-plus people is something that happens anymore,” she said. “It might be that it morphs into more intimate reception-like events. I don’t think the town is going to sign off on any large gatherings for the foreseeable future.”