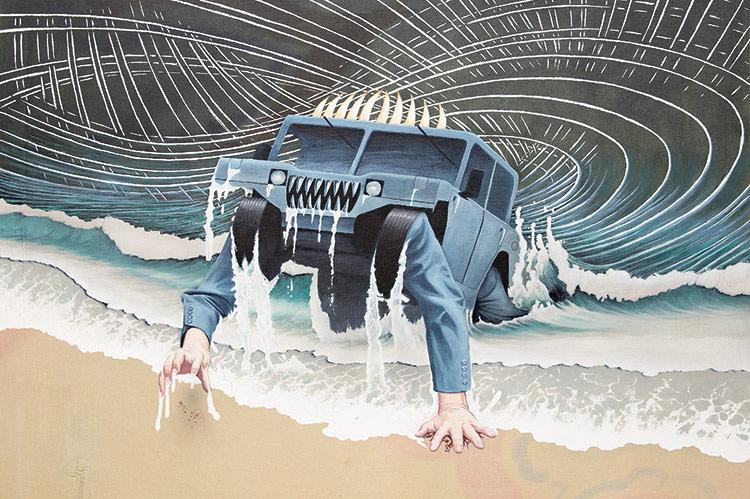 Jim Shaw has been incorporating dream imagery in his art for many years, as in "Daniel's Dream #1 (The Teeth of Steel)" from 2017.
Jim Shaw and Metro Pictures
By Jennifer Landes

Once planned as a traditional installation, the next Parrish Art Museum show, “Telling Stories: Reframing the Narratives,” promises to push the boundaries of the virtual exhibition.

Organized by David Pagel, an adjunct curator for the Parrish and an art history professor and critic, the show looks at the role of narrative in the works of eight contemporary artists from varied backgrounds and regions of the country. These artists — JooYoung Choi, Jeremy Dennis, Jeffrey Gibson, Elliott Hundley, Candice Lin, Mary McCleary, Jim Shaw, and Devin Troy Strother — use their own histories to create “participatory dramas” in their work.

Speaking about the exhibition on April 28, Terrie Sultan, the director of the Parrish, said it had been meant to go on view in Water Mill on May 3, but the organizers were not able to ship the artwork. Rather than let two years of work and a significant publication languish, they instead shifted the concept and the artwork to a virtual setting.

“We’ve never done anything like this before, because we’ve never had to,” she said. “Now we have this whole new thing to think about.”

The show will be inaugurated during tomorrow’s Friday Nights Live program at 5 with Ms. Sultan and Mr. Pagel. The initial concept will involve a mixture of video and high-resolution still photography of some 60 works, as well as individual artist pages that will, in time, build out to feature artist interviews conducted by Mr. Pagel, initially as Friday Nights Live programs.

Mr. Hundley refers to Southern culture, Greek tragedy, politics, and pop culture in his multimedia works. A conceptual artist from New England, Ms. Lin explores identity, gender, aesthetics, and politics through the arts and sciences in collages, sculptures, and installations. The three-dimensional collages of Ms. McCleary seem like banal evocations of domestic life, but have buried layers of symbolism touching on literature, art, history, and Christianity.

The website will also be informed by the exhibition catalog, which is fully illustrated and contains a number of essays on the artists. It is available through the museum, and much of its material will be shared online.

“As people come up with good ideas, we’ll add to it,” Ms. Sultan said of the virtual exhibition. “We’re not exactly sure what it will look like, but we’re excited about giving things a try, even if it’s not perfection.”