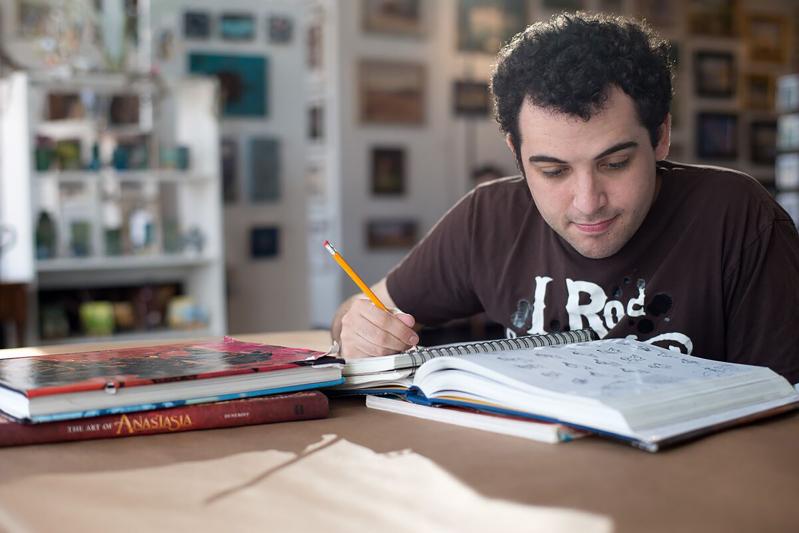 A still from "Life Animated," this week's online film from Hamptons Doc Fest
By Mark Segal

“Life, Animated” is up next in Hamptons Doc Fest’s “Fest Favorite” series of previously screened documentaries. Available starting Wednesday on the festival’s website, “Life, Animated,” directed by Roger Ross Williams, an Oscar nominee, is the story of a young man with autism whose family discovered they could use his favorite animated Disney films to connect him with the world around him.

Previous programs in the series that are still available include “Spielberg,” “Terrence McNally: Every Act of Life,” “Toni Morrison: The Pieces I Am,” “In Search of Israeli Cuisine,” and “The Black Panthers: Vanguard of the Revolution.” The festival’s website also has interviews with many of the directors.

Guild Hall’s Virtual Art Salon series will feature Casey Dalene, the museum’s curatorial assistant and registrar, in an hourlong conversation with Eric Haze, the resident artist at the Elaine de Kooning House, and Katherine McMahon, an artist and the de Kooning House’s director of programming, tomorrow at 3:30 p.m.

Guild Hall will also have a virtual staged reading of “Portrait of Tennessee: The Words of Tennessee Williams” by Mercedes Ruehl, Harris Yulin, Ebon Moss-Bachrach, and Tedra Millan on Saturday at 8 p.m. Arranged by Mr. Yulin and Jack Canfora and directed by Mr. Yulin, the reading will draw from Williams’s essays, letters, journals, and plays.

Links to both programs, which are free, can be found on Guild Hall’s website.

Portraits for a Cause

The Hamptons Arts Network, a consortium of South Fork nonprofit organizations, is working with Philippe Cheng, a fine-art photographer, to take commissions for “Pause at Home,” portraits of families, individuals, and essential workers.

Portraits can be commissioned for $1,500 at give.guildhall.org/pauseportraits or by emailing [email protected]. Proceeds will support the network’s 19 members. Each purchaser will receive an 11-by-14-inch archival collector’s print.

Harper’s Books in East Hampton has installed a “Spring Salon” exhibition in its gallery. It consists of a wide variety of art photography, paintings, and prints. Artists include Cindy Sherman, Andre Kertesz, Keith Haring, and Herbert Matter, among others. All of the works are online with some of the featured pieces visible from the windows.