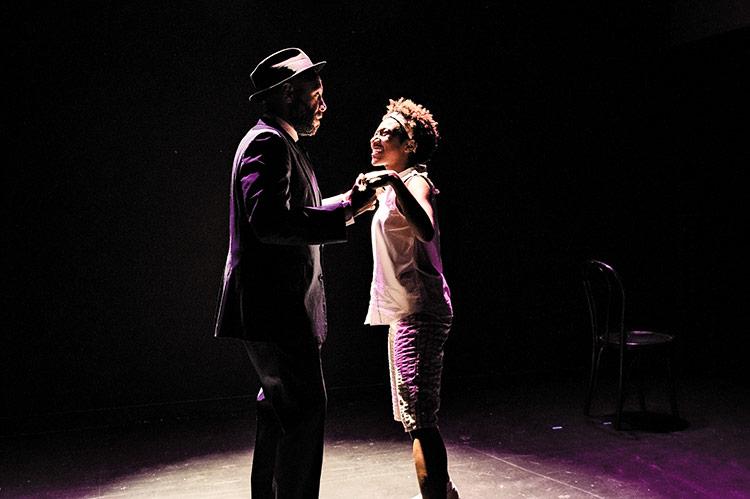 Russell Jordan, left, and Kailah King are the stars of “Vivian’s Music, 1969,” a traveling play coming to LTV in Wainscott on Saturday.
LTV
By Christine Sampson

The death of a 14-year-old black girl in a June 1969 police-involved shooting in Omaha ignited three days of intense unrest there. Decades later, the biographic play “Vivian’s Music, 1969” focuses not on the death of Vivian Strong, but on her life.

The play is “a smart, gentle, beautiful piece that is perfect for starting conversations,” said Kate Mueth, director of the Neopolitical Cowgirls theater company, who is staging “Vivian’s Music, 1969” at LTV Studios in Wainscott on Saturday. The 4 p.m. show will be followed by a panel discussion featuring the Rev. Kimberly Quinn-Johnson of the Unitarian Universalist Congregation of the South Fork, with participation by local community leaders. The admission fee of $20 will be donated to LTV, a nonprofit public access studio, which is at 75 Industrial Road.

“I find this particular piece very powerful in its simplicity, its straightforwardness, in the satisfying way the story happens,” Ms. Mueth said. “That’s a fabulous way to get people from all walks of life pondering some really important issues that need to be looked at and acknowledged in our community.”

She first saw “Vivian’s Music” a year or so ago when it was being performed Off Broadway. She had gone initially to support two women colleagues in theater, but left with a mission — to bring the production to the East End. And she did, first producing it here last February for students and general audiences.

Written by Monica Bauer and directed by Glory Kadigan, the show now travels the world. Kailah King and Russell Jordan are its stars. Ms. Mueth credited Michael Clark, LTV’s new executive director, for the idea of bringing the show back during Black History Month.

“It’s really important to know one’s history and to sit and witness one another’s stories,” she said. “The power of that cannot be overstated in understanding our humanity, whether it’s our skin color, our financial status, the country you’re from, or your religion. The more we can site ourselves in the space of hearing other people’s stories, the better humans we become, and we might make a little more progress in terms of racial justice and equality for everyone.”

“Vivian’s Music, 1969” is recommended primarily for adults and students in the eighth grade and up; there is occasional strong language. Tickets can be reserved online at ltveh.org, or by phone to 631-537-2777, extension 112, leaving a name, number of tickets, and email address on voicemail.