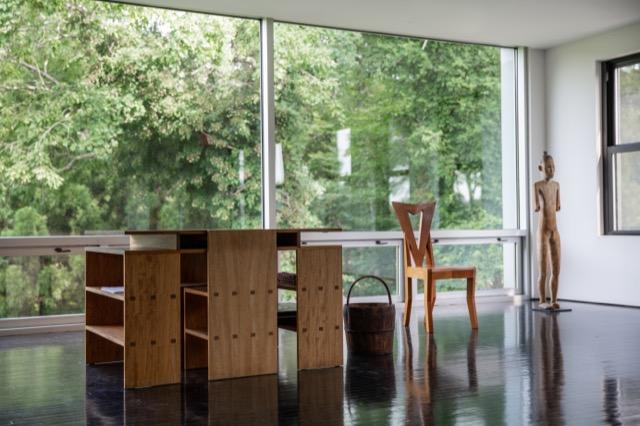 Inside the Watermill Center, where a new group of artists will take up residence this year
Chloe Bellemere
By Mark Segal

The Watermill Center has announced its 18 artist residents for 2020 and the award of four Inga Maren Otto Fellowships. The new residents include three from the South Fork, Candace Hill Montgomery of Bridgehampton, Courtney Leonard from the Shinnecock Nation, and Claire Watson of Water Mill.

The center’s residency program provides artists working in a variety of disciplines the time, space, and freedom to develop new work in a communal environment that encourages experimentation. Each artist will spend up to six weeks at the center, during which they have access to its art collection, research library, theatrical archives, and other facilities, including the expansive grounds.

During each residency, artists show their work to the public as part of In Process @ the Watermill Center, an ongoing series of open rehearsals, workshops, artist talks, and studio visits. This year’s residents and Maren fellows represent 13 countries from Europe, Africa, Asia, and Central and South America, as well as the United States.

Ms. Montgomery began exhibiting in 1979, while still an undergraduate, with shows at the Studio Museum in Harlem and Artists Space. Since then she has shown at the Bronx Museum of the Arts, the New Museum, and Franklin Furnace, among others. Her recent woven pieces were featured in a 2019 Parrish Road Show exhibition at the Sag Harbor Whaling Museum and at the Parrish Art Museum in Water Mill.

The current work by Ms. Leonard, an artist and filmmaker, explores and documents historical ties to water, whales, and material sustainability, according to the center. In collaboration with national and international museums, American embassies, cultural institutions, and indigenous communities in the U.S., Canada, and New Zealand, her practice “investigates narratives of cultural viability as a reflection of environmental record.”

Ms. Watson has exhibited at galleries and in museums on the East End and across the country and been awarded residencies at the Massachusetts Museum of Contemporary Art and the Saltonstall Foundation for the Arts. Her recent work in two dimensions repurposes leather clothing remnants into abstract compositions, while her sculpture embeds ordinary objects such as a teacup or cigar box inside leather and other materials.