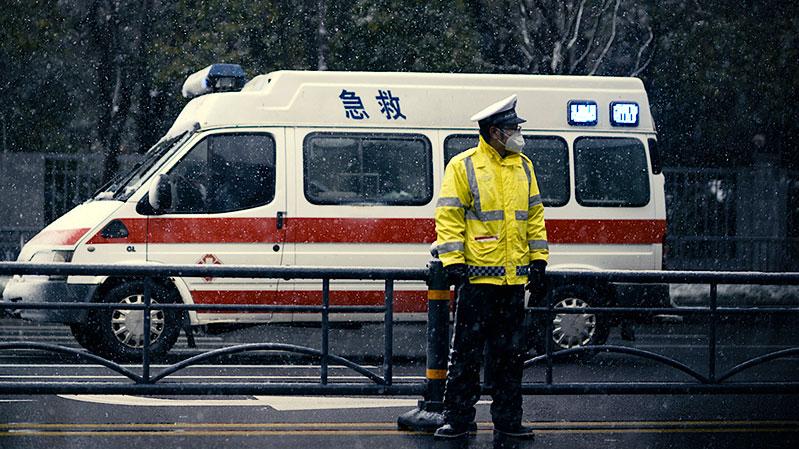 Now available from the Sag Harbor Cinema, “76 Days” was filmed in Wuhan, China, during the height of the pandemic there.
By Mark Segal

If you’re in quarantine or otherwise housebound, and if you’ve binge-watched “The Queen” and “The Flight Attendant” and “The Undoing” and are aching for something a little different, a variety of virtual programs are available during the holidays from our local cultural institutions.

Did you miss the celebrated actor Harris Yulin as Captain Ahab in Bay Street Theater’s Nov. 18 streaming of “Moby-Dick?” The production, which features a cast of stage and screen stars, special video effects and editing, and an original score, is available online through Dec. 31.

How about Jefferson Mays’s performance as not only Ebenezer Scrooge but also more than 50 other roles in a solo tour de force about which the Hollywood Reporter said, “You’ve seen it before, but not like this.” Thanks to Bay Street, you can catch “A Christmas Carol” like no other through Jan. 3.

For music lovers, Bay Street brought Melissa Errico, a Tony Award-nominated actress and singer, into viewers’ living rooms on Dec. 10. That show of holiday classics, American standards, and snippets of storytelling by Ms. Errico is also available through Dec. 31.

“Christmastime Is Here,” a holiday concert by the singer and actor Norm Lewis, premiered online direct from Feinstein’s/54 Below in New York City on Dec. 17 and will continue to be available virtually through Dec. 31. Tickets to all four programs are available on Bay Street’s website.

Cineastes need look no farther than the Sag Harbor Cinema’s website for a diverse selection of independent and world cinema, including the just-released documentary “76 Days,” which covers the 76-day lockdown of Wuhan, China, by focusing on human stories at the center of the pandemic.

Also available from the cinema are “Another Round,” a drama from Denmark about four high school teachers who decide to maintain constant inebriation throughout the workday; “Free Time,” a love letter to New York restored by Manfred Kirschheimer from 16mm black-and-white footage shot in the city 60 years ago, and Frederick Wiseman’s documentary “City Hall,” an epic portrait of a municipal government -- Boston’s -- that actually works on behalf of its citizens.

Not to be outdone, Hamptons Film’s Now Showing series is featuring a lineup of recent releases. Ryan White’s “Assassins” is a documentary about the assassination of the half-brother of Kim Jong-un by two women who claimed they thought they were part of a reality TV prank.

A nightclub fire in Bucharest, Romania, that killed dozens of people is the subject of Alexander Nanau’s documentary “Collective,” which exposes the failure of that country’s government to deliver proper treatment to the injured survivors.

Set in 1840s England, “Ammonite” is a romantic drama about the relationship between an acclaimed fossil hunter, Mary Anning (Kate Winslet), and a young woman (Saorise Ronan) sent to the coast to convalesce. These and five other recent releases are available from the Hamptons Film website.

If boundary-breaking jazz is your passion, the Arts Center at Duck Creek’s 2020 Music Series features 10 recorded concerts on its website by seasoned professionals and emerging artists. For classical music, nothing beats the Perlman Music Program’s PMP From Home series, which has a dozen performances drawing from Mozart, Beethoven, Ravel, Brahms, and many more on its YouTube channel.

Many of the Southampton Arts Center’s virtual programs are available on its YouTube channel without charge through Dec. 31. Among these are the center’s annual Architecture and Design Tour, which this year consisted of a virtual tour of the mid-century architecture of Palm Springs; a gallery tour of the center’s current exhibition, “2020 Vision,” and panel discussions on art, the environment, and the challenges of launching a career in the arts.

And don’t overlook our local libraries, which offer virtual programs of all types for all ages.