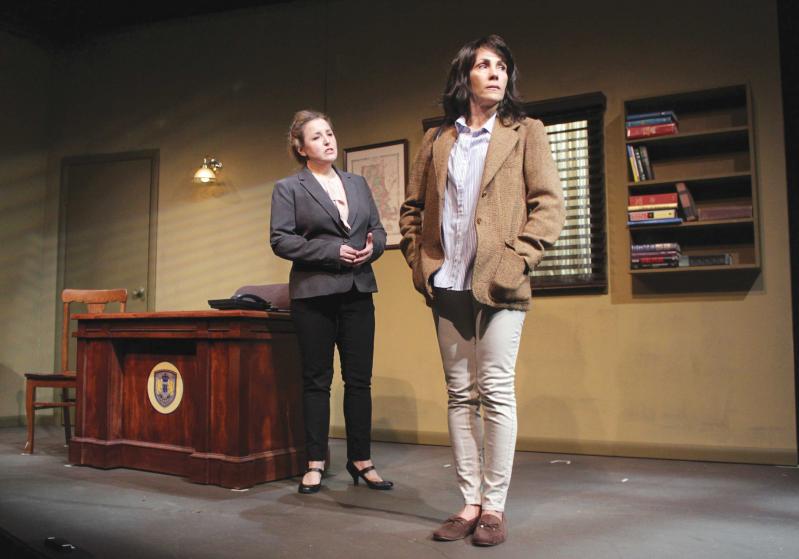 Morgan Vaughan and Minerva Perez in a scene from the Hampton Theatre Company’s “Admissions,” opening tonight in Quogue.
Tom Kochie
By Mark Segal

Joshua Harmon’s plays explore how characters cope when their lives are upended by circumstances that challenge their values and expectations. “Admissions,” which will begin a three-week run by the Hampton Theatre Company in Quogue Thursday, is no exception.

“Admissions” premiered at Lincoln Center in 2018 and won best play awards from Drama Desk and the Outer Critics Circle. It is set at Hillcrest, a not-quite-top-tier New England prep school. Even though Sherri, head of the admissions department, has increased the representation of students of color from 6 to 18 percent, she is not satisfied. In one scene, she insists that photographs in the admissions catalog be staged to feature recognizably dark-skinned students.

Sherri is married to Bill, the school’s headmaster, and their son, Charlie, has his heart set on attending Yale. The test of her values occurs when Perry, Charlie’s biracial schoolmate and best friend, is accepted early by Yale, while Charlie is deferred, even though Perry’s test scores are not as good as Charlie’s.

In an interview with the Lincoln Center Theater blog, Mr. Harmon explained that the play is about more than applying to college. “At its core, this play is an examination of whiteness: white privilege, white power, white anxiety, white guilt, all of it,” he said, adding that the play attempts to hold a mirror to white liberalism.

Andrew Botsford, the theater company’s president, will direct the production. “I wanted to do it ever since I saw it at Lincoln Center,” he said. “I really enjoyed it, but I thought that the challenge would be getting a kid to do it, because Charlie is a major part for a young man. The guy in New York nailed it, but I didn’t know if anybody in the talent pool out here would be able to do it.”

Last year Mr. Botsford cast Ian Hubbard, a 16-year-old who had recently moved to Hampton Bays from Kansas, in the theater’s production of “On Golden Pond.” “When I saw how he worked and what he was like, I thought I could do ‘Admissions’ because I could cast around him.”

In addition to Mr. Hubbard, the cast includes Morgan Vaughan as Sherri, Tristan Vaughan as Bill, Diana Marbury, HTC’s artistic director, as Roberta, a staffer in the schools development office, and Minerva Perez, a newcomer to the company, as Ginnie, Perry’s mother and Sherri’s best friend. Set design is by Sean Marbury, lighting design by Sebastian Paczynski, sound by Seamus Naughton, and costumers by Teresa Lebrun.

In his New York Times review, Jesse Green wrote, “ ‘Admissions’ is an extraordinarily useful and excruciating satire — of the left, by the left, for the left — for today. The satire is largely aimed at the kind of pieties about inclusion that are espoused by woke white liberals.”

Mr. Botsford noted that Sherri is “rabid” about diversity. “Another challenge was to make Sherri, who is not an entirely sympathetic character, somebody we can have sympathy for as a mother and as an administrator with a mission. If we think she’s just a harridan, you won’t be able to buy into some of the heartfelt parts of the play.”

The solution? “A lot of people say casting is 90 percent of the play. Not every director wants to think that. But I would say it’s hugely significant how you cast a play, and I’ve got a great cast.” He added that the Vaughans are married in life as well as in the play.

“Admissions” will run from today through Feb. 2, with performances Thursdays and Fridays at 7 p.m., Saturdays at 8, and Sundays at 2:30, with an additional matinee scheduled for Feb. 1. Discussions with the cast and director will take place after the performances next Thursday and Friday, Jan. 24.

Tickets are $30, $25 for senior citizens (except Saturday evenings), $20 for those under 35, and $10 for students under 21. Dinner and theater packages are also available, as is a lunch and dinner package on Feb. 1. More information and reservations are available from the theater’s website.