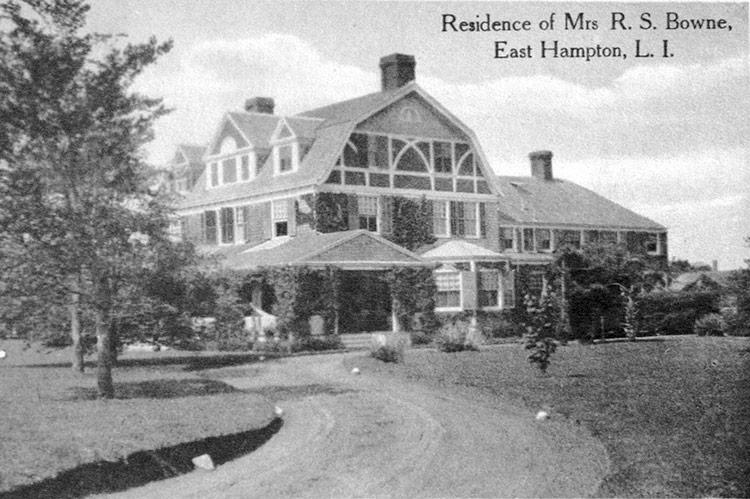 The story of the Robert Southgate Bowne house, seen in this postcard, begins with a death notice recorded in The East Hampton Star on March 20, 1886. George B. Elkins of Brooklyn was remembered for being a “real estate speculator.” Indeed, Elkins owned a house and about 15 acres of land along the west side of Ocean Avenue, which he purchased from Abraham Fithian in 1872 for $6,000. After his death, the tract of land was sold off in pieces by his two daughters, Mary C. and Georgiana Elkins.

Much of the property appears to have been sold to summer residents who later became founding members of the Maidstone Club, including Dr. Everett Herrick, Dr. George E. Monroe, and Robert Southgate Bowne. Bowne, of Flushing, Queens, was the first president of the Long Island Rail Road and one of nine original directors of the Maidstone Club. In December 1888, he and James Gallatin each purchased two acres of land from the Elkins sisters. They soon contracted with James L’Hommedieu, a builder from Great Neck, to build them each a summer cottage. Construction was evidently part of a building boom taking place, as recorded in The East Hampton Star on May 11, 1889, “The work on Messrs. Warren G. Smith’s, Robert S. Bowne’s, Jas. Gallatin’s and George E. Munroe’s cottages, is fast nearing completion and it is expected they will be ready to occupy July 1. These new cottages make quite an addition to the South End of the village. We understand several more cottages will be erected in that vicinity during the coming year.”

According to “Fifty Years of the Maidstone Club” by Jeannette Edwards Rattray, “The Bowne place was very gay in the 1890s,” with many parties held at the house, in addition to dances given for the Bowne’s four children at Clinton Hall (Clinton Academy). Unfortunately, happiness was short-lived as Robert Bowne suffered a stroke while out riding his horse in East Hampton in September of 1896. He died at home at the age of 54, despite the efforts of his neighbor Dr. George E. Munroe. At the time of his death, Bowne was remembered for being one of East Hampton’s longest summer residents, with a deep interest in the welfare of the community.