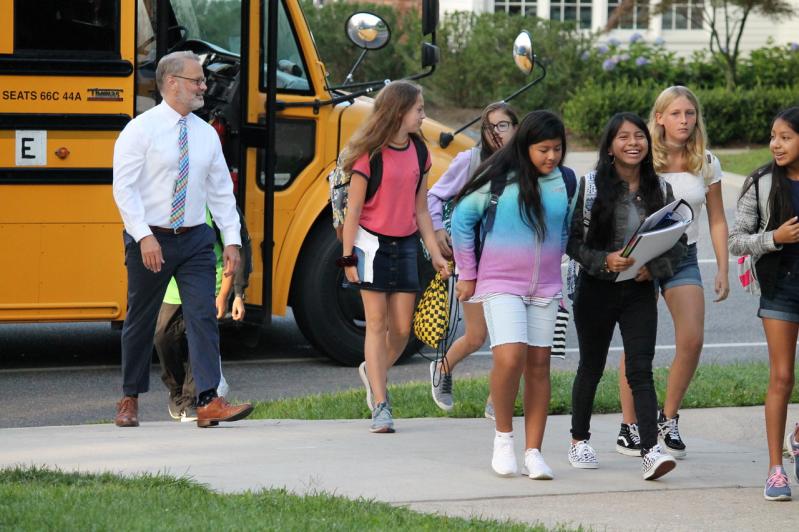 The first day of school on Sept. 4 brought a few more students to some local schools than there were this time a year ago, while others experienced a decline in enrollment. Officials across the public schools say the numbers will change before they report official data to New York State in October.

At the Montauk School, which experienced a sharp drop in students around 2000, numbers this week showed that the decline seems to have leveled off, according to Jack Perna, the superintendent. The school has 315 students now, up from 308 on the first day last year, not including prekindergarten. The largest grade at Montauk is the eighth grade with 43 kids. The school has each elementary grade divided into two sections.

“Years ago we had three, but we had 400-something kids. I don’t know where we put them all,” Mr. Perna said. “But people left. People started to sell their homes. We dropped and now we’re steady. I think we will be steady for a few years.”

The Bridgehampton School, with 211 students, has also seen a slight increase in enrollment, up from 208. Those numbers also do not include prekindergarten. Grade-by-grade enrollment ranges from eight students in 10th grade — a class that had just two students a few years ago — up to 20 in the first grade.

At the Springs School, first-day-of-school enrollment was also fairly steady with 683 students this year, up from 681 last year, according to Debra Winter, the superintendent. A more in-depth report on enrollment will be given during Monday’s school board meeting, she said.

The Sagaponack School has 16 students this year, up from 15 the prior year, according to Jeanette Krempler, the district clerk.

The Sag Harbor School District reported a bit of a small but unexpected “baby boom” in the primary grades; at Sag Harbor Elementary School there has been an increase of 28 students so far this year, up to 400. A chart showing enrollment trends, released Monday, indicates a slight increase in 2019-20 overall numbers but does not exactly specify what they are. Including an increase in students whose families pay tuition to come to Sag Harbor, the enrollment was 938 as of Friday. Previous projections by the Western Suffolk Board of Cooperative Educational Services had showed the district would have 943 students this year.

“The numbers have remained fairly stable,” Katy Graves, Sag Harbor’s superintendent, said Monday. Western Suffolk BOCES “had hinted we were going to see some sharp declines around this time period.”

In East Hampton, school officials said during a Sept. 3 board meeting that the student population declined from 1,748 last year on the first day of school to 1,712 this year — a difference of 36 children. The largest grade at the John M. Marshall Elementary School is the first grade, which has 90 children. The largest at the middle school is eighth grade, with 121, and at the high school the ninth grade is the largest, with 237 students.

At the Amagansett School, 64 students in kindergarten through sixth grade arrived on the first day, according to Maria Dorr, the principal. Last year, that number was 68.

Ms. Dorr noted that the enrollment figures do not include students who choose to go to Ross School, Hayground School, or other private or religious schools. “That’s something all the districts here have,” she said.

The Wainscott School student tally was not available by press time this week.