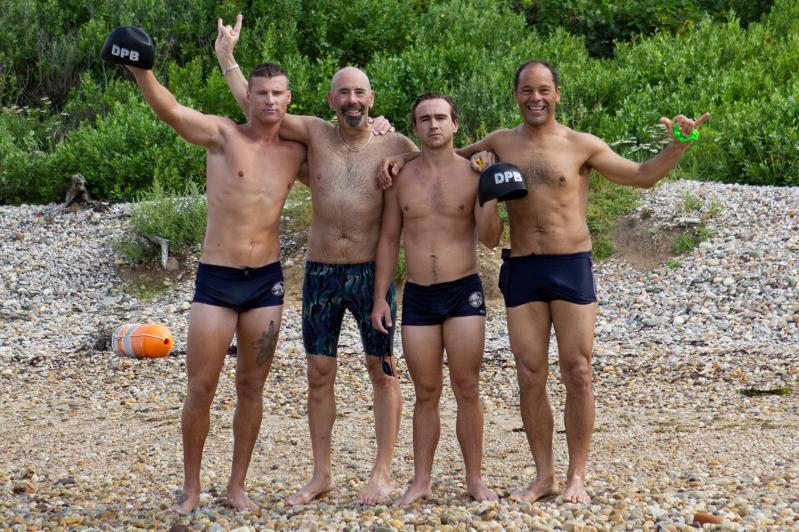 Early in the morning of Aug. 7, four swimmers —  two with considerable open water experience and two with much less — met at the Ship Ashore Marina in Sag Harbor, shook hands, and, in the company of two support boats, set off at 5 a.m. from Cedar Point toward Gardiner’s Island, eight and a half miles away.

The “Gardiner’s Blitz” swim — no one they knew of had ever made the crossing before — had been Sturmann’s idea, a fitting challenge for the Dawgpatch Bandits, a nonprofit headed by Harvey that’s keeping alive the memory of his and Sturmann’s late soccer coach and Sagg Main Beach lieutenant, Mike Semkus, while trying at the same time to defeat the opioid addiction that claimed Semkus’s life at a young age.

“We’ve got three things under way at the moment,” Harvey said during a recent conversation at The Star. “First, we’ve begun to put up calisthenic workout stations in Mike’s memory — there’s one going up now, with a plaque, behind Pierson High School, where Mike and Kyle and I went — and, possibly, we’ll put up others at beaches and in local parks; two, we’re donating money to the Long Island Center for Recovery in Hampton Bays, which is for people who can’t afford rehabilitation, and, three, we’re helping support a center at the University of San Diego that’s providing a safe space for kids who are struggling on the edge of prevention before having to go into full rehab.”

The Dawgpatch Bandits’ center at U.C.S.D., he said, was “in memory of a good friend of mine, Andy Grasso, who was one year below me and died of opioid addiction when he was a sophomore.”

As it turned out, the Gardiner’s Blitz was the third, said Sturmann, in “a distance-swim trilogy. . . .  Spencer and Jeremy had swum from Cedar Point to Orient Point [nine miles] in mid-July [another swim that apparently has not been done before] and Drew and I swam four miles from Cedar Point into Sag Harbor as a warmup for the Blitz.”

“When Spencer learned by way of the grapevine that there was going to be a Dawgpatch Bandits swim to the Forbidden Island — no one’s allowed to land on Gardiner’s Island, you know — he reached out to me,” said Harvey, who added that “through promoting active challenges, especially here, whether it’s swimming, running, biking, or paddling, we’re pushing endorphins over opioids.”

There was, he added, a certain frisson too in “swimming from Cedar Point out to this mysterious, forbidden island that you aren’t supposed to go to. That inspired us too. It’s a free country — why do you have to ask permission? The Dawgpatch Bandits do our own stuff — we map it out, chart it, and execute it.”

The Cedar Point-to-Gardiner’s Island swim was one of several Dawgpatch Bandit challenges that Harvey undertook in recent months, beginning with a 1,300-mile, 12-day bicycle trip through England, Scotland, and Ireland in the spring, with Payton Dwight, a California friend of his, and, at the beginning of July, with Nico McMahon, a fellow lifeguard, a 25.5-mile Sagg Main-Montauk Point marathon run along Route 27.

Plans, he said, were also in the works for a 37-mile running, swimming, biking, paddling Shinnecock Shoreline Challenge spanning the inlet and Montauk Lighthouse at the end of August.

Going into a fund-raiser the nonprofit held recently in Bridgehampton, the Dawgpatch Bandits, which accepts donations through dawgpatchbandits.com, had raised about $4,000 through its athletic tests this summer.

“I surfed with Mike Semkus and was super inspired by him,” said Grosvenor. “He was a great athlete, but was really humble about it.”

“He used to run on the beach from Sagg Main to Montauk Point,” said Sturmann.

Semkus’s addiction, said Harvey, had begun with a soccer injury and had progressed from prescription painkillers to opioids bought on the street. It was fentanyl that ultimately caused his death in 2016, Harvey said.

“We’re not about demonizing addicts,” he continued. “We want to alleviate the pressure on them through calling attention to an alternative lifestyle. We want to welcome them in with open arms, bring them back to a positive light. We’d love to see others take up these challenges.”

The Cedar Point-to-Gardiner’s Island swim is by no means a walk in the park, the four of them said in answer to a question. “This was a new reach for us,” said Sturmann. “Twice as far as Drew and I had ever swum. Anything more than a 10K is a marathon in swimming terms. These guys, Spencer and Jeremy, were very calm and gave us a lot of confidence and reassurance.”

“Drew’s dad was an exceptional pilot, and so was his wife, Dawn,” said Schneider. “It’s very hard to navigate for open water swimmers. . . . The final part, from around the sixth or seventh mile, in the deepest water with the heaviest chop, was the hardest. There was turbulence with the current wrapping around the island. From Gardiner’s to Cedar would have been easier. We were going from known to unknown territory.”

Still, he and Sturmann knew, said Harvey, that with the veterans along, “this swim would get done.”

“Gardiner’s Bay is pretty consistently 40 feet deep,” said Schneider, “and in deep water like that there are a lot of variables — you’ve got the tides and currents working in and around you, the chop is heavier because the wind is coming over the water . . . you’re just a small figure there and it’s pitch black. . . . Everything is magnified.”

While Harvey and Sturmann had drawn strength from being in the company of open water veterans like Schneider and Grosvenor, the latter said that, likewise, he and Schneider had been impressed by Harvey and Sturmann’s energy. “They were,” said Grosvenor, “super intense. I knew this swim was going to be amazing. I was so stoked, and Spencer was, too.”

Schneider and Grosvenor led the way, with Harvey’s parents, Dave and Dawn, nearby in one of the boats. A boat captained by Harvey’s brother, Dana, with his girlfriend, Lydia, as crew, went alongside the younger swimmers.

“They did it in just over four hours,” said Harvey. “It took us four and a half. We all wound up on the beach together at 9:40. It was beautiful.”

“They were only 10 minutes behind us,” said Schneider, who has swum around Manhattan and has a 10-hour Ditch Plain-to-Lazy Point swim among his credits, “but they would have finished even if they’d been two hours behind us — from sheer will. I love what they’re doing. I love knowing that people can do something great to ameliorate a horrible situation.”