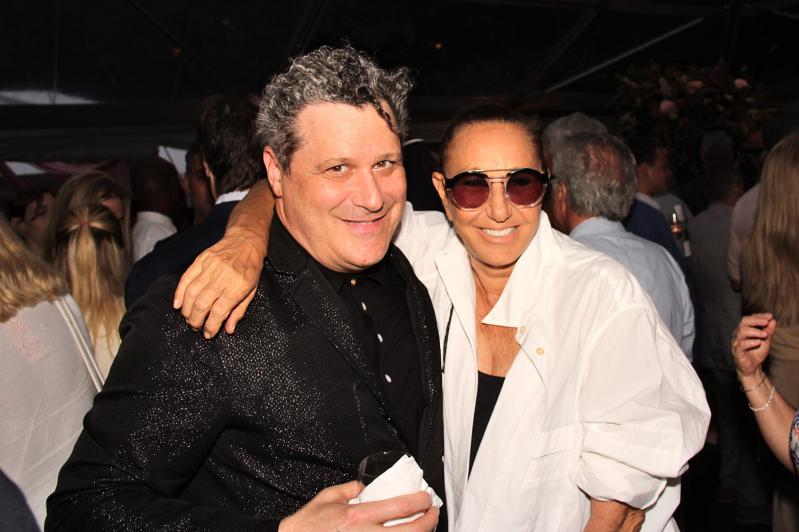 Isaac Mizrahi connected with Donna Karan at the Animal Rescue Fund’s Bow Wow Meow Ball in East Hampton, where he was honored on Saturday.
Durell Godfrey
By Jennifer Landes

Readers of Isaac Mizrahi’s recently published memoir, “I.M.,” will be aware that he always dreamed of being a performer, even as many people know him only through his work in fashion design.

While at the Fiorello H. LaGuardia High School of Music & Art and Performing Arts, which inspired the film “Fame,” it “dawned on me that I wasn’t as good looking as some of the other kids,” he said last week. “I didn’t feel like a movie star, a Broadway star. I felt like a fat kid.”

He was attracted to fashion because he was good at it and there was less personal rejection. “If a dress or a collection is rejected, it’s difficult, but if someone writes that you can’t sing, you can’t dance, or you can’t act, they’re talking about you. That was scary to me.”

As a result, his earlier career was more fully focused on design. This was highlighted in “Unzipped,” the popular 1995 documentary on his life and work, and the film’s showcasing of his flamboyant personality led to work on television talk shows and other projects. Eventually he joined other fashion stars in hosting and judging contestants’ work on fashion competition shows, including the last season of “Project Runway All-Stars,” which finished airing in March.

These days he’s as likely to be on a stage belting out a favorite tune with his band as he is in his atelier working on his brand for QVC or other design projects. He spends some 50 to 60 nights a year performing in intimate spaces like Cafe Carlyle in the city, and larger venues, such as Bay Street Theater in Sag Harbor, where he will perform on Monday night.

As a child, he made elaborate puppet shows in his garage. By age 11, he was impersonating Barbra Streisand and Liza Minnelli. At the same time, he said, his mother “was obsessed with clothes. My father was a manufacturer of children’s clothes. I learned to sew as a really young kid. I was completely immersed in all this stuff.”

A lot of this story is in “Queensize,” his latest cabaret show. Having just worked on his memoir, “there’s a lot about my life in this show, and how I really self-identify as a fat person. No matter how thin I get, I will always feel like a fat kid.”

He was one of the kindest judges on the runway competition shows. Over the past couple of years, the fashion reality show genre has been going through some upheaval, with changes in personnel, broadcast channels, and promotional partnerships. A new cast at “Project Runway,” the flagship, may have led to a ratings decline. Heidi Klum and Tim Gunn, the original hosts, have since announced their involvement in a new show in a similar format, “Making the Cut,” produced through Amazon.

Mr. Mizrahi declined to comment on specific shows, saying he did not know about the new Amazon show or the latest ratings, but added that he thought of himself as both a participant and a fan of such programs. “They’re fun to watch, but the danger is that people need to do something in such a short time.” In contrast, he would like “to give them three weeks to do one sleeve.”

As a judge, he frequently told contestants “just because you couldn’t come up with something in 15 minutes doesn’t mean you’re a bad designer.” Parisian designers, he said, don’t come up “with the answers to things in three seconds. That’s why their stuff is so good. That’s why the time limit thing is so boring. ‘Three, two, one, hands up.’ We’ve heard that three trillion times.”

Asked if the pool of talent was starting to dry up after so many series and seasons, he said, “I don’t know, darling, frankly I don’t know.” He noted that the abilities of a great fashion designer and that of a great competitor on one of these shows are “entirely different skill sets,” including sewing.

“Some of the greatest designers among us couldn’t sew. I knew how to sew, but the real skill set I had to learn was to train others to sew and teach my seamstresses how to make beautiful clothes and to set standards. It’s a whole different world. Maybe that’s what Heidi and Tim will get to. That’s what I think they should get to.”

Even when he seemed fully immersed in design, there was always showbiz in his life. For the past 25 years “there wasn’t a time when there wasn’t some appearance coming up, some show that I was doing.” While he was at Calvin Klein he was in a revue, “then I started doing gigs at a place called Eighty Eights, and then I started working on my one-man show in the late 1990s, and by 2000 I was in that show every single night for a whole year.”

He said putting together a program (in the case of “Queensize,” songs by Leonard Bernstein, Cat Stevens, Jimmy Webb, John Kander, Cole Porter, James Taylor, Jerome Kern, and others) “is like designing a collection, writing a book, or anything creative. It starts with an idea.” It can be a single song, “something that’s hilarious or beautiful that I know I can kill with my band and I know will be really funny if I start talking about it afterward. So it builds, one thing onto another.”

In addition to songs and stories, he has become known for regifting swag items from event gift bags. One thing you won’t see in his regifting bag is a fleece jacket he was given by the Tribeca Film Festival when he judged the documentaries competition in its first year. “It’s not the chicest thing, but it’s the coziest thing. I love that it’s slightly oversized, even when I’m slightly oversized.”

The other is a thermos sippy cup he received from this year’s gala for the New 42, an arts education organization. “All of my life, I made fun of sippy cups. Then when I wanted to take this delicious iced coffee I made on the road to QVC, it was a revelation. It doesn’t leak and it doesn’t spill. You take a sip from it, put it in the caddy, and when it’s done you wash it in a dishwasher.” He added, with a laugh, “I’m crazy, but that sippy cup is the greatest thing.”

When he’s not onstage, he and his husband, Arnold Germer, divide their time between the city and Bridgehampton, where he likes to go out to eat in the off-season and take walks on the beach, and where he does a lot of his writing. He also drives. “I like whatever little driving I can get done here, but I’m a terrible driver!” Ultimately, he said the real reason he likes it is “my dogs like it here, and anything for the dogs, anything. They run my life.”

Some limited seats may be left for Monday’s show, which begins at 8 p.m. Tickets cost between $79 and $125 and can be purchased at the box office or online.