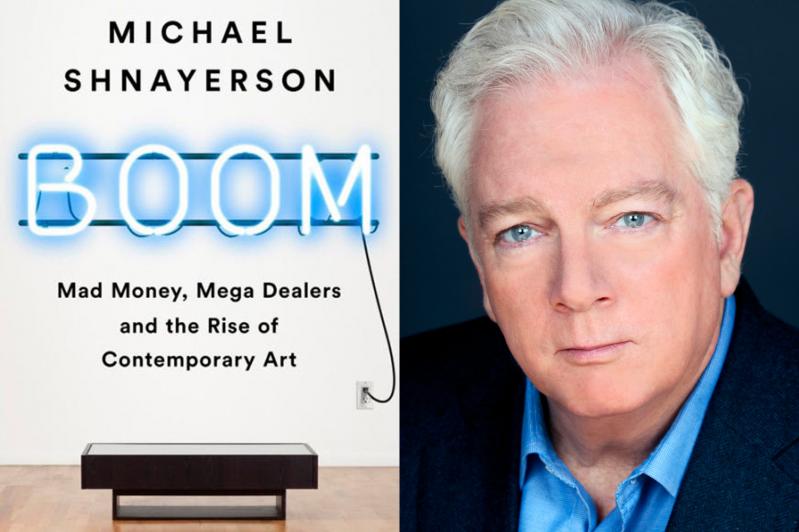 Michael Shnayerson’s riveting new book, “Boom: Mad Money, Mega Dealers, and the Rise of Contemporary Art,” traces the growth of a burgeoning postwar art world and its expansion into the head-spinning mega-market it is today. Fueled by insatiable collectors, resourceful, often combative art dealers, and a shifting array of artists, the art market has swelled into a global industry with annual worldwide sales in excess of $67 billion. The staggering exchanges of money, money, and more money will leave you reeling. Buckle up — it’s a wild ride.

Mr. Shnayerson, a longtime contributing editor at Vanity Fair, tells the tale — warts and all — with brisk, lively prose through which even the most arcane financial tactics blithely unfold.

Assiduously researched, the book weaves the stories of dozens and dozens of gallerists, museum professionals, collectors, and artists, moving from the pre-eminent Leo Castelli, whose eponymous gallery blazed a trail from the waning days of Abstract Expressionism to Pop Art, Minimalism, and beyond, to present-day high jinks with Leo’s onetime protege, the mega-dealer Larry Gagosian, and a bevy of other power brokers and tastemakers.

Castelli reigned over the contemporary art world for decades, representing Robert Rauschenberg and Jasper Johns, Andy Warhol, Roy Lichtenstein, Dan Flavin, Richard Serra, and so many others. Along the way, the artists were catapulted to the heights of contemporary art, with prices to match. When Leo moved his uptown gallery to 420 West Broadway in 1971, the SoHo address quickly became the epicenter of an art market on steroids. Relative to today’s market, Castelli’s connoisseurship, velvet-rope diplomacy, and loyalty to his artists seems downright quaint.

But his historic trailblazing set the stage for today’s robust, luxurious, and often frenzied art market. Mr. Gagosian befriended the older, more experienced Leo, becoming both an acolyte and the heir apparent.

“Nobody really needs a painting,” Mr. Gagosian said in a 2016 Wall Street Journal interview. “It’s an act of collective faith what an object is worth. Maintaining a value system is part of what a dealer does, not just making a transaction, but making sure that important art feels important.” Mr. Gagosian, arguably the most successful art dealer in the world, with 16 galleries on three continents, is a genius negotiator and a very big thinker.

Some would say he’s ruthless, but Mr. Shnayerson offers no judgment on any of the protagonists in “Boom,” leaving it to the reader to sort out the jaw-dropping prices, artist branding, and unabashed merchandising. Peggy Guggenheim, the heiress and passionate art collector whose gallery, Art of This Century (1942-47), showcased the modern artists of Europe as well as New York’s emerging Abstract Expressionists, lamented the commercialization of fine art as early as the 1960s. She would be desolate.

Mr. Shnayerson focuses on four of the most significant gallerists, the so-called Mega-Dealers: Arne Glimcher of Pace Gallery, David Zwirner, Iwan Wirth and Manuela Hauser of Hauser and Wirth, and, of course, Larry Gagosian.

He delves into their roots (Mr. Gagosian got his start selling posters in a parking lot), the relationship with their artists (Mr. Glimcher met Agnes Martin at Jack Youngerman’s Coenties Slip loft in Lower Manhattan in 1957 and has represented her, and her estate, since), their growth and development (Mr. Wirth became an art dealer at 16; the team now has a 100-acre experience-based farm in Somerset, England, with galleries, a farm-to-table restaurant, and artists’ residencies, a block-long experiential gallery in Los Angeles, two galleries in New York, as well as St. Moritz, London, Zurich, and Gstaad), and the possibility for longevity and succession (two of Mr. Zwirner’s children have worked in the family business, and Marc Glimcher joined Pace — will the kids inherit the empire? Does a bloodline ensure immortality? What’s to become of it all?).

In 1968, Paula Cooper opened the first contemporary art gallery in SoHo at 96 Prince Street. Over time, her employees included the artist Lynda Benglis, Roberta Smith, who would become a renowned New York Times art critic, and the gallerist James Cohan, once a co-director there.

Conversely, in 1985 Mr. Gagosian, who straddled the New York and Los Angeles art worlds, would be the first gallerist to move into an industrial space on West 23rd Street. The neighborhood, then a sort of no-man’s-land, was dotted with private clubs, prostitutes, and crack vials, but its warehouses were gigantic and cheap.

By the mid-90s the art world had decamped to Chelsea, including Ms. Cooper, the doyenne of the downtown art scene. Chelsea was by no means the last stop, though. The art world has continued to grow at an unfathomable pace — to Hong Kong, Singapore, Seoul, Athens, Basel, Geneva, Paris, London, and parts in between.

Along the way, we meet other iconic dealers, each of whom is book-worthy in and of themselves. Pat Hearn, Colin de Land, Dick Bellamy, Marian Goodman, Gavin Brown, Matthew Marks, and Mary Boone, a powerhouse whose SoHo gallery helped launch the careers of Julian Schnabel, David Salle, Eric Fischl, Jean-Michel Basquiat, and others.

Cunning, visionary, and indefatigable, Ms. Boone loved celebrity, both hers and her artists’. Like Mr. Gagosian, she allied herself with Castelli, rising quickly to become one of the most talked-about gallerists in the world. But it hasn’t always been smooth sailing. Pleading guilty to tax evasion, earlier this year she was sentenced to 30 months in prison.

To be clear, “Boom” is not a book about art. It’s the story of the art market and its climb to stratospheric heights, its art fairs, auction houses, staggering prices, market strategies, and the winners and losers along the way. Forbes first began counting international billionaires in 1987. At that time the count was 140. By 2017 the number had soared to 2,043. The private-collection-turned-museum is almost de rigueur now, a marriage of contemporary art and real estate.

So, the ultimate question arises: Among the artists, collectors, and gallerists, whose legacy is it?

Janet Goleas is an artist, independent curator, and writer living in Springs.