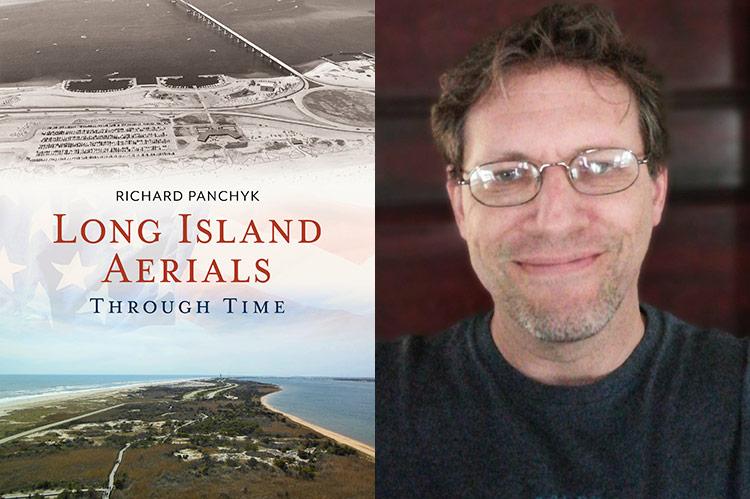 The history of our fair Island has been picked over fairly thoroughly. So when Richard Panchyk collected for publication a cache of military photos from the National Archives taken by Army Air Service crews out of Mitchel Field on the Hempstead Plain, was it inevitable, just a matter of time, or was it a stroke of genius?

The photos in “Long Island Aerials Through Time,” a result of training more than reconnaissance or disaster planning, date from the mid-1920s to 1940 and were taken at heights of up to 9,000 feet. Mr. Panchyk, a Queens guy whose three dozen books include “World War II for Kids,” with a foreword by the late Senator John McCain, emphasizes the views’ glaring lack of all we’ve come to hate, from the soul-sucking concrete straightaways of our four-wheeled transportation infrastructure — the L.I.E., the Grand Central, the South­ern State — to the strip malls and tract housing of dispiriting suburbia.

Curiously, the book was not put together geographically, as the sheet metal flies, west to east, but rather alphabetically, like a dictionary for visual reference. And so right away we see a 1930 aerial of Amagansett, at the time a crazy quilt of farming plots cut through by the L.I.R.R. It shows a period in between — not quite “the sleepy hamlet of the nineteenth century” and yet still far from “the exclusive enclave it is today,” as Mr. Panchyk puts it.

Also from 1930, but more eye-opening, is a shot of Canoe Place from 7,000 feet. The cut-through in this case is the Shinnecock Canal as it divides a whole lot of nothing — the forests of Shinnecock Hills to the east and a dune-riddled stretch of Hampton Bays to the west. The author doesn’t address this, but regarding a common misperception, you’ll notice that the canal was not cut by the Hurricane of 1938, but dates to the 1890s in connecting Peconic and Shinnecock Bays, while the monster hurricane did indeed tear open the inlet on the ocean side almost directly south of the canal, cutting off what was once a popular sightseeing drive along the barrier beach.

Moving on, we make like Superman over Shelter Island, which from 9,000 feet never seemed more sheltered, tucked as it is between the North and South Forks, and then sandy Gardiner’s Bay and Island, to, naturally, the East End’s ultimate iconography, the Montauk Light, in three shots dating from 1928 to 1937.

We see some of what’s been lost, too, the Ponquogue Lighthouse in Hampton Bays, for one. Sturdily built of red brick in the 1850s, its charms included matching shingled houses at its base, one for the lighthouse keeper and his family, another for the crew. Knocked down with great effort in 1948 for essentially no good reason, it was one of the tallest such structures on the Eastern Seaboard, captured here for posterity in 1930 by a photographer barely 30 feet above its roughly 170-foot height. It was decommissioned the following year.