Messages inspire hope in the hearts of people here 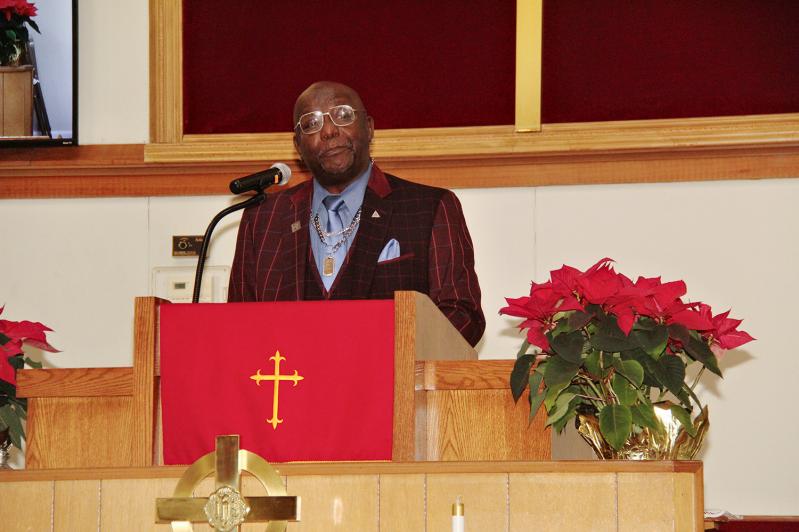 James Banks, a college professor and social worker, called upon the audience at Calvary Baptist Church on Monday to “make room for love.”
Durell Godfrey
By Christine Sampson

While Dr. King’s example was one of peaceful but powerful advocacy, “we still have a long way to go,” Mr. Banks said. He cited a current “cascade of crises” — a complex set of political, economic, health, and existential challenges, layered on top of the systemic racism existing before and during Dr. King’s lifetime, and continuing after he was assassinated in 1968.

Shortly after his speech concluded, news flashed that eight people had been shot, one fatally, in a gang-related incident in Fort Pierce, Fla., during a large “family fun day” event being held in honor of Dr. King. A long way to go indeed.

Mr. Banks, who is the chairman of the Southampton Town Anti-Bias Task Force and coordinator of multicultural affairs at Suffolk Community College, encouraged the crowd at the East Hampton church to cultivate values that “lead us to an appreciation of diversity.” He urged that people “stop working in silos — let us work together,” in the name of truth, fairness, and equity.

The service was led by a spirited choir, with music provided by Joe Delia and Deuboyce Robinson, who offered a soulful rendition of Sam Cooke’s song “A Change Is Gonna Come.” Many in the congregation expressed elation at being able to gather in person again after three Covid years of virtual services.

“The time has come,” Mr. Banks said, over and over again. “Yes, it has,” replied the audience, each time more resoundingly than the last.

Calvary Baptist Church was not the only South Fork religious institution honoring Dr. King’s legacy this week. At the Old Whalers Church in Sag Harbor on Sunday, Nancy Remkus, the minister, reminded everyone that Dr. King was “a single person who made great changes in our world — a person with a dream, courage, intelligence, and faith. I hope today that we can be inspired by the work of Martin Luther King — his devotion to his own faith while keeping his heart and his mind open to the beliefs and teachings of people of other faiths — and I wonder if this isn’t the key to world peace, in seeing our commonalities rather than what makes us different.”

At the Unitarian Universalist Congregation of the South Fork in Bridgehampton, many religious leaders came together for an interfaith service that drew around 70 people, among them the Thunderbird Sisters of the Shinnecock Indian Nation. The Rev. Kimberly Quinn Johnson, minister of the Unitarian Congregation, said the energy in the room was uplifting.

“I think it’s always good when we have an opportunity to gather in community to reflect on the work of [Dr.] King,” she said. “So much of what people talked about was the unfinished business of the Civil Rights Movement. I think it’s important to talk about what is still left to do.”

On Monday, Rabbi Josh Franklin of the Jewish Center of the Hamptons and the Rev. Walter Silva Thompson of Calvary Baptist appeared on Instagram Live with Brooke Goldstein, a social-justice attorney and executive director of the Lawfare Project who often tags her advocacy efforts #EndJewHatred, for a special MLK Birthday episode of Ms. Goldstein’s video series. They spoke of persecution — both antisemitism and racism — and the need to unite and support each other. The Instagram video can be found online at bit.ly/3ZGr0aX.

When Dr. King spoke in Selma, Ala., in 1965, a number of rabbis were at his side and along for the civil rights movement’s freedom ride, they recalled. “It’s quite obvious that racism is still a part of the social fabric of the U.S.,” Rabbi Franklin said by phone on Tuesday. “I think it behooves all marginal people to come together in partnership and make sure our voices are heard. Quite often we like to see our differences as divides, and they become a wedge between us. When we’re able to come together, we’re able to advocate for partnership and the common justice causes that we have together.”