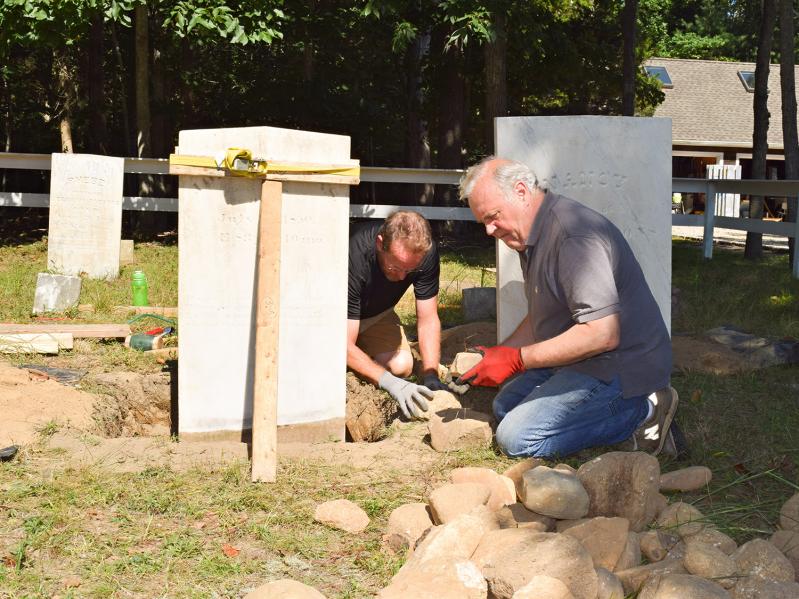 Under a hot mid-September sun, the Burying Ground Preservation Group, a nonprofit organization formed in 2018, was at work last Thursday at the Hog Creek Cemetery, a small parcel on Hog Creek Road in Springs where members of the Parsons family are buried.

The group completed a renovation of the Hedges Parsons Cemetery, also in Springs and also a site where many members of the Parsons family are buried, in 2020. The name is believed to have arrived in East Hampton with Samuel Parsons and his three sons in 1648.

The overall restoration effort follows a 2009 report issued by the East Hampton Town Nature Preserve Committee on the state of the town’s cemeteries. Among its recommendations were to provide maintenance plans, preserve existing architectural details and fencing of sites with original elements, and to make abandoned cemeteries historical landmarks or town property. The town has a line in its annual budget for cemetery maintenance.

As at the Hedges Parsons Cemetery, the work performed at the Hog Creek Cemetery first entailed the spraying of a cleaning agent on marble stones that kills “bio-growth” on them, rendering them substantially whiter over time, said Zach Studenroth of the preservation group. “Brightening them in that way isn’t really considered a repair,” he said, “but it’s much easier to read the inscriptions, and the average person driving by, they see that something’s happening. There’s an appearance of repair work going on and that someone’s taking care of it.”

With the group’s Joel Snodgrass, his son, Kole, and his nephew, Rocco Maimone, Mr. Studenroth repaired two broken marble tablets. “This thing was shoved into the ground as deep as you can see the dirt,” he said of one, “and then another piece was set against it. It was a sort of temporary repair. We had to dig all around it.” Digging into the earth, they found a brownstone base with a notch cut into it in which the tablet sat.

Another tablet had sunk into the earth and was tilted, and had to be hoisted with a massive tripod. “With the really heavy stones, it’s a tripod,” Mr. Studenroth said. “With smaller stones, we can do it by hand, but it’s kind of dangerous,” he said, gesturing at one. “This is about a 500-pound piece of stone. That meant hoisting it up, sinking it back in, and making it nice and level.” A few dozen large stones had been excavated from the plot, and they would be returned around the tablet and its base “so he’s braced and ready to go.”

Other headstones are made of sandstone and brownstone, and another is slate. “The slate ones tend to be the earliest,” Mr. Studenroth said. “Maybe they tend to date from the middle of the 1700s.”

Cracks will appear in brownstone over time, he said. “Water gets in and it’ll freeze and thaw, and eventually it kind of pushes layers apart, so it creates a cavity.” The remedy is to drill and inject grout, filling the cavity. “It’s maddening,” he said. “Marble doesn’t do that. The marble is not layered, but it’s relatively soft, so the surface tends to weather away, and with that you lose the inscription. Every stone,” he said, “has its own intrinsic flaws.”

Accompanying footstones had all sunk into the earth and were being resurrected. Inscriptions on headstones face west, Mr. Studenroth said, and those on their accompanying footstones face east, the body placed between them. “These are all true believers, probably a Presbyterian congregation,” he said. “They believed in a Second Coming of the Christ, and you wanted to be able to sit up and witness that, because that comes from the east. It’s all very ritualistic in these earlier sites.”

The fence that encompasses the cemetery was to receive a fresh coat of paint, Mr. Studenroth said. “It’s a good way of showing to passers-by that there’s a historical spot that people are maintaining,” he said.