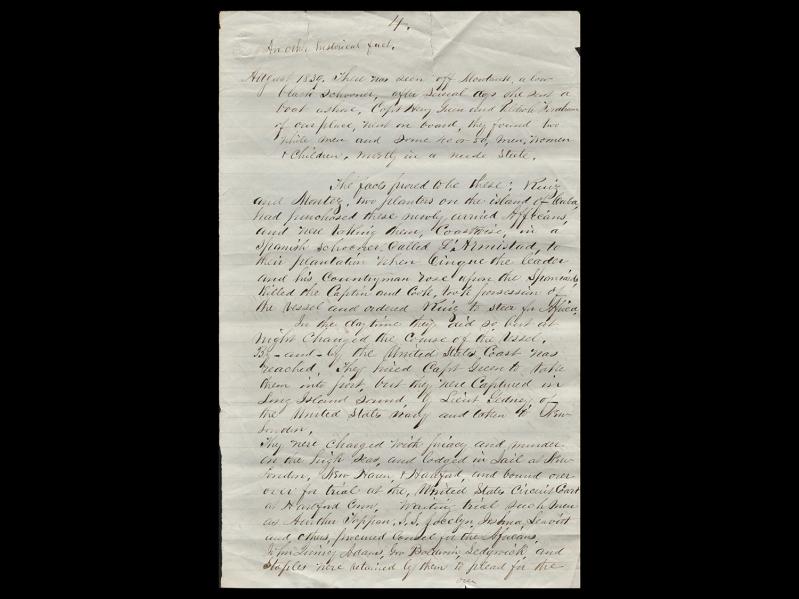 This incomplete account from the Sag Harbor First Presbyterian Church (Old Whalers) Collection is from around 1871 to 1880. Despite missing the first two pages, the document recounts the story of the Amistad, a ship carrying enslaved people who revolted against their captors, ultimately regaining their freedom.

Written within a few decades after the Amistad case, the document includes period language inappropriate today, along with stereotypes of that time having to do with “civilized” and “educated” behavior for Black people. The initial pages seem like a letter, but further on the document looks more like notes, perhaps for a sermon. The writing draws on Christian Scripture and the Declaration of Independence to emphasize racial equality, while referencing local events to make the writer’s point.

On Aug. 24, 1839, La Amistad, a schooner from Cuba, was captured at Culloden Point on the north shore of Montauk. Enslavers continued importing enslaved people both illegally to the United States after this country banned the importation practice in 1809 and legally to other countries. The 53 captive men, women, and children on the Amistad began their journey on a Spanish ship from the West African coast in January, and after arriving in Cuba they were transferred to the Amistad to travel to their new enslaver in a different part of Cuba.

After three days on the Amistad, Sengbe Pieh (also called Joseph Cinque) managed to open his shackles and free his fellow captives. Pieh and the other kidnapped Africans together took control of the ship, ordering its navigator to take them home. The navigator secretly turned the ship around every night, hoping to be spotted and rescued by Americans.

The Amistad was captured just north of Montauk by an American naval vessel and towed to a Connecticut harbor, where the surviving Africans were imprisoned on charges of murder and piracy. After 18 months in jail, they were finally found innocent by the United States Supreme Court on grounds of self-defense as they were taken from Africa after the 1809 ban. Abolitionists raised money for a ship to transport the survivors home to Sierra Leone after more than two years of captivity.