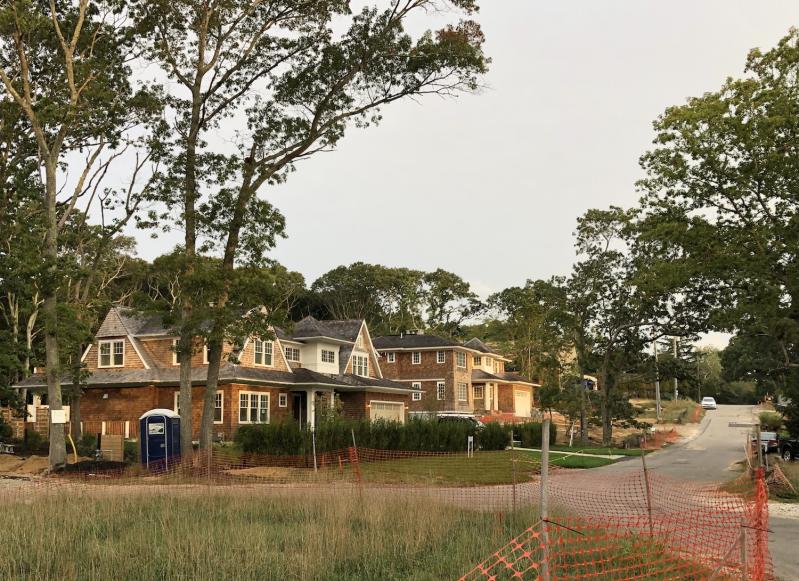 “Introducing Handy Lane: A bespoke collection of homes on the east end of Long Island,” begins the pitch on the website of Manhattan-based Salty Development. “Handy Lane is a new-build development of eight unique properties just steps from the Amagansett dunes. Scheduled for completion in 2022.”

Indeed, Handy Lane, a dead-end street just west of Cross Highway, is the site of houses under construction on eight parcels at its southern terminus, each a half-acre or less, though just how many steps the approximately half-mile distance to those dunes would require is less clear. With up to six bedrooms each, the houses are priced between $5.5 million and $6.75 million.

It is a familiar story in East Hampton Town and across the South Fork: along with teardowns and rebuilds, spec houses that, with seemingly few exceptions, take allowable lot coverage and floor area to their absolute limit. Earlier this month, The New York Times took note of “the big house rising above” the beach at Ditch Plain in Montauk. The lanes less than a mile east of Handy — Hand, Meeting House, Miankoma, and Hedges, along with Atlantic Avenue — have been similarly transformed in recent years.

The houses under construction on Handy Lane have drawn the ire of some nearby residents, including the Pulitzer Prize-winning author and architecture critic Paul Goldberger, who in a March letter to The Star disparaged what he called “banal knockoffs of the Shingle Style,” noting that each would feature a swimming pool and pool house. The parcels, he wrote, “are so small that these McMansion wannabes are set one beside the other, jostling so tightly that in some cases the only place a driveway can fit is across the front lawn.”

Opponents of the development have launched a website, saveamagansett.org, and a petition at change.org that asked that people sign to “ask the Town of East Hampton to step in and say ‘enough is enough.’ “ As of yesterday, only 73 people had signed the petition.

“If you go down Handy Lane, it is filled with very modest homes on quarter-acre lots or smaller,” said Harold Koplewicz, who lives on Skimhampton Road, just south of the new development. “The town didn’t think anyone on that block would complain.” Part of why he lives in the town, he said, is that “it doesn’t feel like a subdivision, like tract housing in the middle of Long Island.”

East Hampton Town, Mr. Goldberger said, “doesn’t need more six-bedroom houses with pools for people who are not invested in the future of East Hampton and are seeing it as a resort. What it desperately needs more is affordable housing.”

A June 10 letter to the planning board and Building Department from the Lynn Gartner Dunne & Frigenti law firm, representing Mr. Goldberger, Mr. Koplewicz, and Adam Abelson, all of Skimhampton Road, asked that the planning board rescind its 2015 negative declaration under the New York State Environmental Quality Review Act for four of the parcels and that the Building Department rescind the building permits and pool permits issued for all eight parcels and issue a stop-work order and directive to the developer to “refrain from any further encroachment” and “revegetate over-cleared lots.”

A negative declaration under SEQRA, indicating a determination that there would be no significant adverse environmental impact, was issued in connection with the proposal to subdivide 2.1 acres into the four lots on the west side of Handy Lane. A review of documents related to the subdivision, the law firm’s letter states, revealed “inadequate assessment of the proposed action’s environmental impacts.” It alleges improper segmentation of environmental review of the proposed subdivision to reduce the apparent severity of potential impacts; no plan to address erosion and stormwater control; disregard of information pertaining to endangered and threatened species; failure to comply with conditions of a waiver of subdivision approval, and excessive clearing.

But according to the Planning Department, all of the structures meet the town’s zoning requirements and state building codes. No variances or other relief from applicable standards were required. Inspections have not identified any deviations from approved plans.

In December, the town was notified of possible overclearing on as many as six of the lots, a Planning Department official said, and notified the properties’ owners that no additional clearing could take place and that corrective action would be required. Final inspections will not be completed, nor certificates of occupancy issued, until the town’s Natural Resources Department approves revegetation plans and all remediation is completed.

The State Department of Environmental Conservation imposes restrictions on clearing of trees relating to protection of northern long-eared bat habitat, and may impose clearing restrictions for projects involving a change of land and that are within 1.5 miles of a documented summer occurrence when bats are likely to be present. A D.E.C. official told The Star that it had reviewed information provided in a complaint about clearing in the area but was unable to determine when the trees were removed or if any violations had occurred during the restricted cutting period, which in Suffolk County is March 1 to Nov. 30.

“Even if it may be, in the most technical sense, strictly legal,” Mr. Goldberger said, “the idea of allowing these under-half-acre lots to be used for six-bedroom houses plus pools and pool houses, cheek by jowl, so close together that most of them have front-facing garages because there’s no room even to have a driveway swing around to enter from the side, is definitely a violation of the intent of the zoning, if not a violation of the letter of the law in the most literal sense.” The development on Handy Lane, he said, is “not what East Hampton should be about, in terms of planning.”

“At this point in our history, the newer houses are being built to the absolute maximum allowable,” Supervisor Peter Van Scoyoc said on Monday. “That’s what is shocking. Previously, people didn’t build to the absolute maximum allowable. They were more concerned about scale and compatibility with the community.” He referred to a conversation with Jeremy Samuelson, director of the Planning Department, about “having another look at maximum coverage and perhaps even clearing . . . given the speed at which this trend is expanding. It’s time to have another look. It’s disconcerting that people’s focus is so much on expression of their own wealth rather than the place where they are going to live, which is where the value has been.”