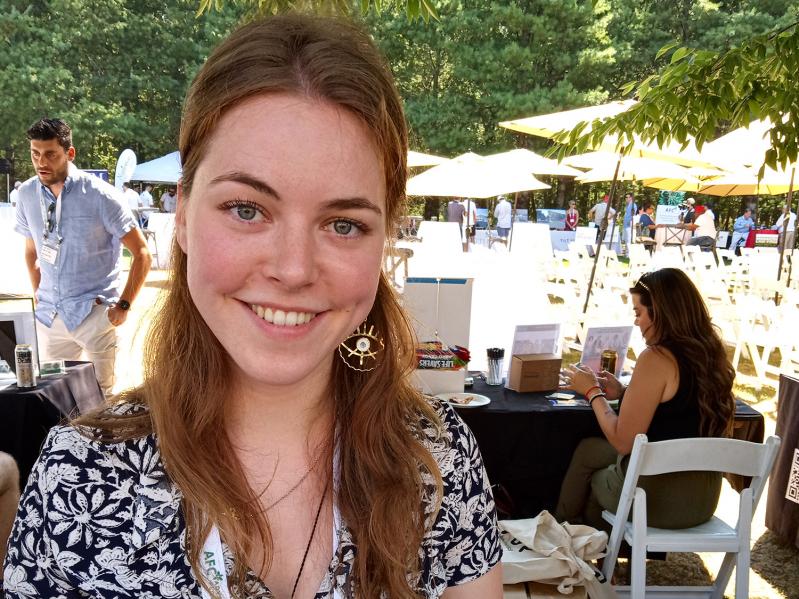 Amalia von Alvensleben promotes the healing power of ketamine-based therapy treatments that are now available at the Hampton Insight Institute for Psychedelic Therapy in Southampton.
Tom Gogola
By Tom Gogola

Many people know by now that Southampton Town has “opted in” to open cannabis dispensaries and consumption lounges one of these days, but less known is that the town is now hosting the East End’s only psychedelic healing center.

The Hampton Insight Institute for Psychedelic Therapy on Main Street, which opened last month, offers ketamine-based psychotherapy services — “the ultimate form of self-care,” said Amalia von Alvensleben, its chief operations officer. Ketamine, which helps people deal with anxiety, depression, post-traumatic stress disorder, and other mental health issues, is known as a dissociative drug “that allows you to break down your ego, your walls,” she said — “and since your mind usually suppresses traumatic experiences, the medication allows you to bring up the trauma but view it from a different point of view.”

Ms. von Alvensleben has been working with Dr. Lea Lis, the founder and medical director of the Hampton Insight Institute and the former psychiatrist for the East Hampton School District, to get the word out about their new venture. Dr. Lis is a longstanding psychiatric practitioner locally.

“We have both felt that traditional psychiatry and psychopharmacology was not getting our patients where they needed to be, and wanted to expand the practice,” said Ms. von Alvensleben, who holds a bachelor’s degree in psychology and neuroscience from Maastricht University in the Netherlands, and is also trained in ketamine-assisted psychotherapy.

The practice focuses on healing and personal growth, she said, as she described the institute’s role in an emerging field of psychedelic healing that is gaining purchase across the country via psilocybin decriminalization efforts, and popular mass-market books like Michael Pollan’s “How to Change Your Mind: What the New Science of Psychedelics Teaches Us About Consciousness, Dying, Addiction, Depression, and Transcendence.”

The new curiosity and activism around ketamine, Ecstasy, psilocybin, LSD, and other psychedelic or psychotropic drugs for healing, was on display at the recent Hampton Cannabis Expo 2022, which featured a talk from an attorney, Courtney Barnes, who is fighting for greater access to psychedelic therapy.

The Hampton Insight Institute had the lone table at the Expo devoted to this topic.

Ketamine, like cannabis, has a social stigma attached to it as a party drug. It is popular with clubgoers, who call it “Special-K” and head down the “K-Hole” into a trancelike state after ingesting the drug, which has anesthetic and hallucinogenic properties.

As Ms. von Alvensleben noted, a nightclub is not the ideal setting to heal a traumatized brain. “It’s a club, it’s dark, they don’t know the people around them — and so the drug can have a very negative effect.”

The Hampton Insight Institute, in contrast, offers a disciplined therapeutic experience. It begins with a psychiatric evaluation to determine if a person is eligible for treatment. If they are, the clinicians provide a three-hour ketamine session in a setting designed to put patients’ minds at ease before, during, and after taking the drug.

“We don’t guide the experience,” Ms. von Alvensleben explained, “but we do take notes, ask questions, check to make sure they are comfortable, give them a hug, hold their hand. We like to be more personal with the patients.”

The ketamine experience is followed, she said, by an “integration” session, “kind of like psychotherapy, but you talk about the experience of the ketamine, analyze it, talk about what came up.” A single session, including the evaluation, ketamine treatment, and integration, costs $1,250. The clinic recommends six sessions over the course of three weeks, at a total cost of $5,000, to maximize the long-term benefits of the therapy, which are subject to debate in the scientific community.

It’s pricey, but the institute stresses that it is not in Southampton to cater to a wealthy summer crowd. Ms. von Alvensleben said they want to work with veterans or other members of the community who may be experiencing trauma or depression, but who haven’t gotten results from traditional antidepressants or therapies. The institute does not accept insurance, but financial assistance is available.

The science behind the therapy is intriguing in its own right: When introduced to the body, ketamine acts to block certain receptors located on a nerve cell. According to institute materials, this “can lead to relief of depression, pain, and create new psychological pathways for healing.”