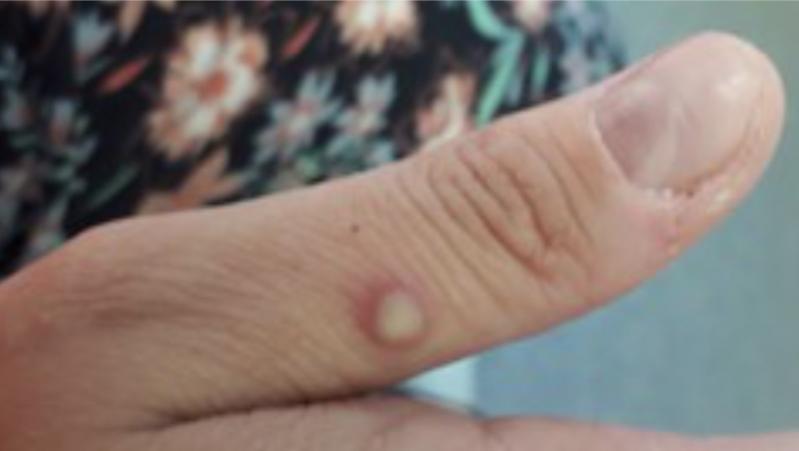 "A rash that can look like pimples or blisters that appears on the face, inside the mouth, and on other parts of the body," according to the C.D.C.
Natiional Health Service England High Consequence Infectious Disease Network
By Christine Sampson

As of Tuesday afternoon, Suffolk County had documented 16 cases of monkeypox in total, the second-highest case count in the state outside of New York City. Across the United States there have been just shy of 3,500 cases, including about 1,000 in New York, according to the Centers for Disease Control.

The disease isn’t spreading as fast as Covid-19 did in the early days of the pandemic, nor is it spreading in the same airborne way. It is rarely fatal, but public health officials here are keeping a close watch on it nonetheless.

Dr. Gregson Pigott, Suffolk County’s health commissioner, said in an email to The Star that even though Suffolk’s case count is relatively low, “we expect that number to increase. It is a concern. Anyone can catch monkeypox, so people have to be careful.”

Hospitals including Stony Brook Medicine and its facilities in Southampton and Greenport are “fully engaged in continuously monitoring the situation,” Dr. Susan Donelan, the medical director of health care epidemiology at Stony Brook Medicine, said in an email to The Star this week. “We have maintained our increased number of negative air pressure rooms, and the health care system continues to comply with state mandates regarding stockpiled personal protective equipment.”

According to the C.D.C., monkeypox, which belongs to the same virus family as smallpox, spreads through “direct contact with the infectious rash, scabs, or body fluids” of someone who is infected. Intimate forms of physical contact such as kissing, cuddling, and sex are known ways to contract the virus, as is touching clothing, bed linens, or other objects that were used by someone who was infected. Pregnant mothers can spread the virus to fetuses in the womb through the placenta.

Symptoms can include fever, chills, swollen lymph nodes, exhaustion, muscle and headaches, and, perhaps most notably, rashes resembling pimples or blisters on the face, inside the mouth, and/or other parts of the body, including the hands, feet, chest, or genitals. “The rash goes through different stages before healing completely” within two to four weeks, the C.D.C. says. Those who contract monkeypox should isolate at home.

The agency also notes that no treatments exist specifically for monkeypox infections, but because of its similarities to smallpox, “antiviral drugs and vaccines developed to protect against smallpox may be used to prevent and treat monkeypox.” Smallpox was basically eradicated in the 1980s through widespread vaccination efforts.

The only significant prior outbreak of monkeypox in the U.S. was in 2003, when six states reported a combined 47 cases. The virus was first discovered in 1958 among monkey colonies in research settings, but the C.D.C. says its exact origin is still unknown.

Those are the basics. Now, how concerned should we be about the virus?

Dr. Donelan suggested that “a level of situational awareness from all residents is important, as well as familiarity with how monkeypox is presenting. Unlike Covid, monkeypox requires prolonged and intimate exposure to someone who is currently infected.”

She said Stony Brook Medicine has been “communicating repeatedly to the public to remain on alert and aware of the symptoms through educational initiatives and press conferences with Suffolk County. We also encourage individuals to consult with their healthcare provider on potential exposure risks.”

Stony Brook Medicine is working with the Suffolk County Department of Health Services to administer the monkeypox vaccine, which is still extremely limited in availability. Vaccines are given by appointment only; information on scheduling can be found at suffolkcountyny.gov/monkeypox. According to Dr. Pigott, Suffolk has given more than 3,000 first-dose vaccine shots to county residents so far.

The nearest vaccination center is Stony Brook Southampton Hospital’s Edie Windsor Healthcare Center in Hampton Bays, which specializes in caring for the L.G.B.T.Q.+ community. The New York Times reported earlier this month that monkeypox cases are “clustered around men who have sex with men,” but noted that it is not considered a sexually transmitted infection. In an interview with The Times, Gregg Gonsalves, an epidemiology professor at Yale, called it “an epidemiological accident of history. This is not a gay disease.”

As for prevention, Dr. Donelon said that it is extremely important for people to “have an understanding of the health of someone with whom they intend to have prolonged/intimate contact.”

On its website, the C.D.C. recommends avoiding close contact with people who have a rash that looks like monkeypox. People should also not share cutlery or dishes with someone who has monkeypox, and they should not handle an infected person’s bedding, towels, or clothing. Proper hand washing and sanitization — a method that we should be extremely familiar with by now — is also a preventive measure.

“We are conducting case investigations and we ask that people be as forthcoming as possible with us,” Dr. Pigott said, “so we can contact those people who might have been exposed in an effort to contain the spread of the monkeypox virus.”

Mashashimuet Park's History and Future
A Conference for Young People to Create Solutions
Get Outside, Get Moving
END_OF_DOCUMENT_TOKEN_TO_BE_REPLACED