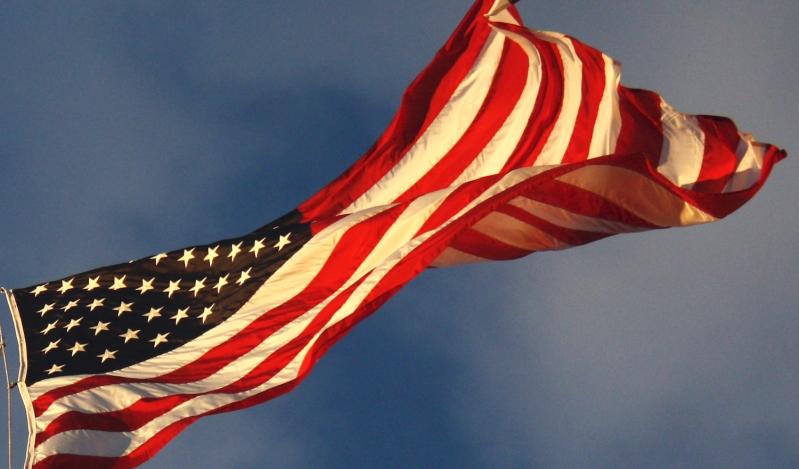 It was a cool and rainy Monday morning at the Coast Guard station in Montauk as two service members prepared to raise the American flag. Raindrops whipped around as they carefully unfolded the pennant and attached it to a halyard. Then they stood at attention along with other sailors on the base for a full five minutes and promptly at 8 a.m. snapped into action. The flag quickly took its place at the top of the flagpole, above the Coast Guard flag and other pennants.

The Coast Guard and other service branches adhere to the strictest protocols for raising and lowering Old Glory, as set out in the 1923 United States Flag Code, which was enacted with the guidance of the American Legion, a lead authority on the proper care and display of the American flag.

Flag etiquette is an especially big deal around the Fourth of July, in a country where nearly 70 percent of Americans own or fly the flag and spend an estimated $5 million annually on Fourth of July flags. As the late Southampton flag expert Henry W. Moeller wrote in “Inventing the Flag: How the Stars and Stripes Was Woven From Symbols”: “The American flag is ubiquitous in daily life. Americans display their national flag more widely at home and abroad than any other nation.”

Whether they display the flag with a sort of purist fidelity to the Flag Code is another thing — and given the highly detailed protocols, it’s a high bar indeed.

“We are probably not as strict as that,” says East Hampton Fire Chief Duane Forrester of the Coast Guard’s daily ritual. The fire service hoists a 20-by-30-foot flag on the Fourth and also uses it for funerals of ex-chiefs and events such as the annual Sept. 11 memorial. “We are pretty much a paramilitary-structured department like most other fire departments — so we try to adhere to the standards and culture of the flag to preserve, to keep the tradition,” Mr. Forrester said. The flag detail is handled by five or six members of a ladder company. It’s a big flag, but Mr. Forrester stressed that “we don’t ever let it touch the ground.”

The Flag Code is rich in specifics but there are a few general guidelines that are pretty easy to observe heading into the holiday weekend: Besides never letting it touch the ground, the flag should be lowered at night or be illuminated if it is not. The flag should always be the top flag except when it’s being raised alongside flags from other countries. It shouldn’t be displayed on a parade float except from a staff, nor should it be draped over the hood of a car. And when it is displayed on a car — the staff should be fixed to the chassis or clamped to the right fender of the vehicle.

The Flag Code also spells out the circumstances in which a flag should be flown at half-staff. Brian Carabine, a Vietnam veteran and quartermaster at the Everit Albert Herter Veterans of Foreign Wars Post 550 in East Hampton, said his pet peeve is that “it’s lowered to half-mast too often. . . . It’s just my personal opinion,” said the retired Marine, “but the biggest problem is that when the president says we’re going to lower the flag — it always specifies a time period. People are good about lowering it when they start the time period, but they forget to put it back up.”

Another area of confusion, if not consternation, is when the flag is featured on clothing, be it winter hats with patriotic pompoms or flag-design bathing suits. It’s okay to wear such garments provided the clothing hasn’t been made using an actual flag, says Ann Byars, manager of youth education and civics at the American Legion headquarters in Indianapolis. “Many Americans simply want to express their patriotism and love of country by wearing an article of clothing or an item that has an image of the flag imprinted on it,” Ms. Byars says via email. The American Legion has long accepted the practice even as Ms. Byars highlights that “there are those that have differing opinion than that of the American Legion, so we are not able to say if you will offend anyone or not.”

The Flag Code highlights a few exceptions to acceptable utilizations of an image of the American flag, including on seat cushions and holiday-theme paper napkins. It’s unacceptable, Ms. Byars says, to have “the image of a flag imprinted on single-use disposable items, items that one would sit or walk on, or items one would use for blowing their nose or cleaning food from their mouths.”

The United States has seen a demonstrable uptick in public displays of patriotism in recent years, with some people preferring to fly an American flag with 13 stars instead of 50, signaling a return to the revolutionary spirit of 1776. The same rules as flags with the full complement of stars apply to that one, Ms. Byars says, citing the U.S. Army Institute on Heraldry, where “any officially approved American flag, irrespective of the number or arrangement of the stars and/or stripes, may continue to be used or displayed until no longer serviceable.”

When a flag is tattered or otherwise rendered unserviceable, the American Legion says it should be disposed of in a ceremonial manner, preferably by burning it. The Legion takes a dimmer view of those who would burn the flag as a political statement. That’s still protected speech under the First Amendment, though an oft-proposed Flag Desecration Amendment would give Congress the constitutional authority to pass laws outlawing desecrating the flag for any reason.

The First Amendment also protects an individual or organization’s right to reconfigure the U.S. flag as a means of personal or political expression — including “Back the Blue” black-and-white flags that feature a blue strip to denote policing’s “thin blue line.” Similarly, it’s not uncommon during Pride Month to see American flags with the “rainbow” treatment hanging from L.G.B.T.Q.+-friendly homes or businesses.

It’s unclear whether those flags would be considered “desecrated” under the proposed constitutional amendment, and the American Legion is not going there.